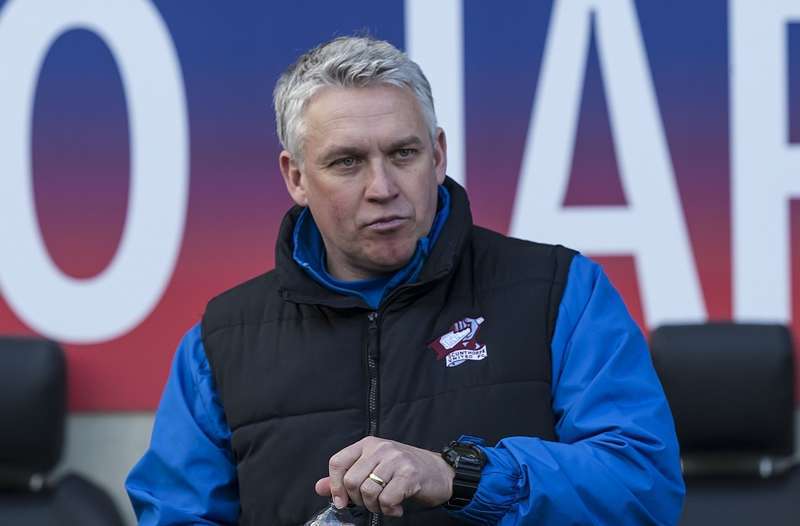 Caretaker no more: Nick Daws has permanent charge of Scunthorpe until the summer (photo by Media Image)

SCUNTHORPE United boss Nick Daws believes he and assistant Andy Dawson have the club’s best interests at heart after being appointed the new man at the helm at Glanford Park.

He paid tribute to the departing Mark Robins, who pleaded for Daws to stay with the Iron after his own dismissal.

The 45-year-old stepped up from first-team coach to take temporary charge of the League One side after Robins was sacked on January 18.

He oversaw four wins in five matches before landing the permanent role on Monday.

“I’m very pleased to have it all sorted,” Daws told The FLP.

“We’ve spent six weeks trying to improve performances and results on the pitch and, thankfully, we’ve managed to do that.

“It’s always a proud honour to be given the responsibility of leading the team and the football club. It’s one I’m looking forward to between now and the end of the season.

“At the time when Mark and Ned Kelly left, it was quite a hectic day – a Monday morning, and all of a sudden we were taking training out on the pitch.

“We said from that first moment that both of us and the players needed to focus – and that’s what we did from the first minute.

“That built towards the game against Colchester, where we recorded the first win, and the momentum carried on from there.”

The former Altrincham and Bury midfielder has spent the last ten years of his career coaching around the country, with clubs such as Rotherham and Barnsley, under the stewardship of ex-boss Robins.

Scunthorpe is the third club where he has assisted the former Manchester United player.

Daws, though, revealed the real reason he didn’t follow his close friend out the door.

“Once the chairman asked me to stay, that was the end of the situation,” he said.

“That was made easier when Mark recommended to the chairman that I stayed, for which I’ll be eternally grateful to him.

“Did I have thoughts about whether I should be going as well?

“Those things did go through my head, but ultimately staying in the game and being able to earn a living is important – and, if you want to progress, it’s much easier when you’re in a job.”

Daws recently referred to Scunthorpe United as ‘our club’, and the Iron boss insists the team’s future is linked to the way it embraces its supporters and fellow townspeople, putting the onus on a community spirit to buoy the players on the pitch.

“Having worked at clubs like Bury and Rotherham, community is such a big part of the way the football club operates,” he said.

“This area has found it tough recently, with the losses of jobs in the steel industry.

“Our location is a little bit detached from a major hub, in terms of South Yorkshire, and it’s important we pull together.

“When this has a strong bond between its players, staff and supporters, it becomes a really good football club to punch above its weight, which it has done in the past during the Championship years with Nigel Adkins.”

After hailing ‘incredible’ ex-Hull City defender Andy Dawson for his pivotal role in the club’s recent success, Daws is hoping he can remain in the job alongside Dawson longer than their current deals, which run out at the end of the current season.

“I hope we do well enough for the chairman to say he would like us to stay in charge beyond that,” he said.

“With 15 games to go, for us to achieve something, like the play-offs, we would have to show automatic promotion form.

“Andy and I are comfortable with the time we have, but if the chairman wanted to bring in someone else we would both be happy to fulfil whatever roles we are asked to do.”

*This article was originally published in The FLP on 28 February 2016.