Dunlavy column: A sad tale of tangled Notts County is worth study

Posted on April 4, 2019 by admin in Columnists, Featured, Features | 0 Comments 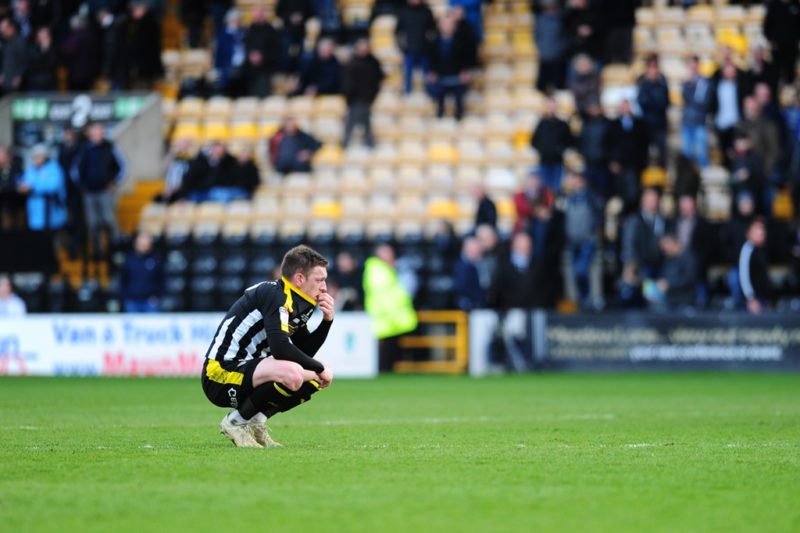 Applause was muted. Though part of celebrations to mark the 125th anniversary of Notts County’s only victory in the competition, the parade was tantamount to a sick joke – like showing a tramp a picture of his long-dead grandfather’s sprawling manor.

Even Doyle looked sheepish, painfully aware that the sight of a County skipper toting silverware was deeply incongruous.

This, after all, is a club at death’s door, an institution of 157 years’ standing now propping up a league it helped to found in 1888.

“We’re fighting for our lives,” said Neal Ardley, the Magpies’ third manager of the season and 30th in 31 years. “And we can do it. I believe that.”

Perhaps. But considering County haven’t spent a single day outside the bottom two since mid-November, no savvy punter would back them to survive.

Nor, indeed, anyone who witnessed the 1-0 loss to an Exeter side forced to play a man light for 67 minutes. Quality, composure, penetration and chances – all were absent in a display that exuded all the menace of Mary Poppins.

Walking to the stadium past the factories and warehouses that line Meadow Lane, it is impossible to ignore the hulking home of Nottingham Forest looming just a few hundred yards across the Trent.

This time next year, it is the Reds, not the Magpies, who may hold the title of oldest club in the Football League.

Yet it isn’t so long ago that Notts owner Alan Hardy had bragged on twitter that the two old rivals would soon be in the same division. Even in August, fresh from a play-off semi-final defeat to Coventry, he described promotion from League Two as a ‘dead cert’. The bookies agreed, billing County as favourites for the title.

But after false starts under Kevin Nolan and then Harry Kewell, Ardley, appointed in November, is now attempting to forge a coherent unit using players from four different managerial regimes, most of whom are talented enough to thrive in League One but patently ill-equipped to fight relegation from League Two.

Meanwhile, Hardy has managed to fall out with Nottingham Forest, cutting off a once beneficial stream of loan players.

Wages have spiralled to £3m, unsustainable for a club of County’s limited means. Losses are mounting. Even the scoreboard has been turned off to cut costs, though it would make ugly reading anyway.

Hardy, now seeking a buyer for the club after his interior design business, Paragon, went into administration, is contrite.

“I got seduced by my schoolboy dream of being involved in football and the mistake I made was forgetting my business principles,” he lamented this month. How many chastened owners have said that down the years?

For all his mistakes, outbursts and arrogance, it is hard not to feel for Hardy, who has lost his business, his reputation and a great deal of money.

It would also be a dreadful shame if a club still supported by some 9,000 stoic punters – just less than Bournemouth – was plunged into Non-League.

Wherever they end up next year, County’s season from hell should be studied by any wannabe owner thinking of dabbling in the lower leagues. Because it is an object lesson in how not to run a football club.