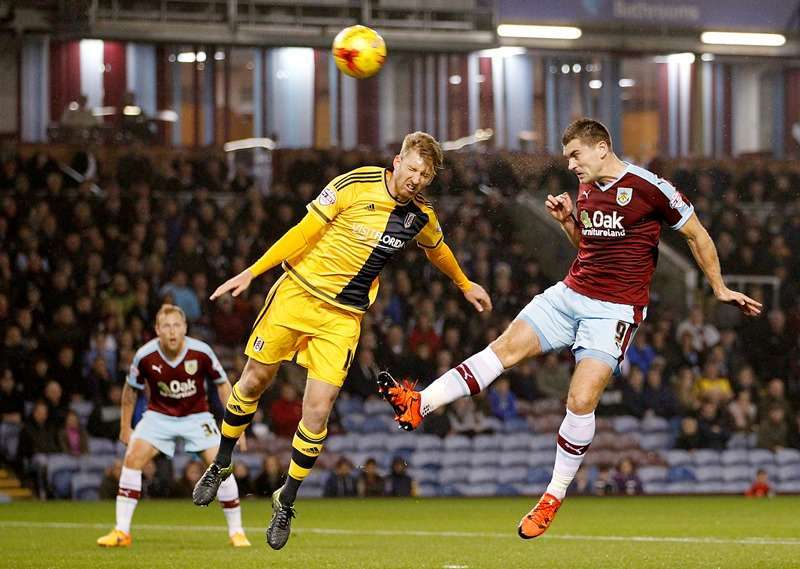 SAM Vokes thought Boxing Day couldn’t get any worse than a 3-0 defeat at Hull. Then, a sinkhole opened up on the M62, forcing Burnley’s team bus to take an alarming detour.

“We had to go off road to get home,” he recalls. “And a lot of people couldn’t even do that. The road collapsed, so a lot of our fans got stuck in Hull. It was a nightmare.”

Mind you, the Clarets striker is used to being knocked off course. This time two years ago, Vokes was in the form of his life. His telepathic double act with Danny Ings was the catalyst for Burnley’s surprise Championship assault.

Pursued by national newspapers, interviewed by Sky. By the end of March, the deadly duo had racked up 20 goals apiece, a total bettered only by Liverpool’s Luis Suarez and Daniel Sturridge.

“There was no secret,” explains Vokes, whose bustling muscularity perfectly complemented the soft feet, darting movement and scuttling pace of his strike partner.

“We just got on really well and understood how the other played. You can practise all you want, but just playing alongside each other for 30 games will make any partnership work.”

Then, in a title decider against Leicester at Turf Moor, Vokes ruptured the anterior cruciate ligament in his left knee.

It was a bitter blow. A Premier League reject at Wolves, he’d waited five years for a return to the grandest stage. And, even though the Clarets went up without him, specialists warned he would be lucky to enjoy realistic action for a year.

“The worst part,” he recalls, “wasn’t watching the games. It was being in the dressing room five minutes before kick-off when the nerves are going and the manager’s rallying everyone.

“That’s when it really hits home that you’re not really part of things. At first, I would try and stick around, but eventually I took myself away from that and sat in the stand.”

Defying the doctors, Vokes made his return on Boxing Day 2014 in a 1-0 defeat by Liverpool. A week later, he scored against Spurs in a 1-1 draw at Turf Moor.

But, when the adrenaline ebbed, reality set in. “I was back,” says Vokes, who failed to score another goal as the Clarets were relegated. “But I wasn’t fit.

“You’re out for nine months with the injury and, behind closed doors at least, everyone says it takes 18 months to make a full recovery. If you think about it, I’m only at that stage now.

“For the rest of the season, I was chasing everybody else in terms of fitness. In the Premier League, that was hard work and it wasn’t until the end of pre-season this year that I really felt like myself again.

“It was a frustrating period because I knew what I wanted to do but I just didn’t have the sharpness.”

For those who’d watched ‘Vings’ tear up the Championship (and terrorise top-flight Southampton in the FA Cup), a different sense of frustration stemmed from being robbed of the chance to see what havoc the pair could wreak against the elite. Did Vokes share that sentiment?

“Of course,” he admits. “We were going well and it would have been nice to start the Premier League season and see if me and Danny could pick up where we left off.

“Would things have been different for Burnley if we’d both been fit? You never know. But it was always a tough, tough league for a club like us.” 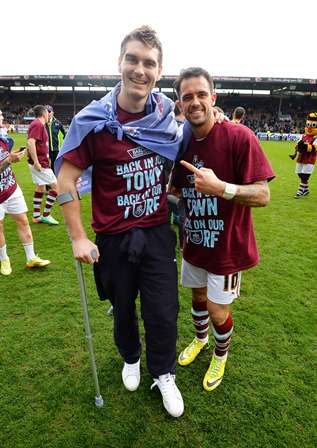 Ings prospered in Vokes’ absence, netting 11 Premier League goals to earn a move to Liverpool that will likely net the Clarets a £10m-plus fee in compensation. Yet, just five games into his Anfield career, the 23-year-old suffered the exact same injury as Vokes.

“I’ve kept in touch and spoken to him quite a few times since it happened,” adds Vokes. “He’s texted a few times just to ask for a bit of advice on things he’s doing. A good four or five of us at Burnley have had a similar injury, so he’s got a decent support network here! He’s doing his rehab and he’s on the way back. He’s had a couple of knee injuries before, so he knows the drill in the gym. I know from experience that it’s a tough one to come back from, but he’s a positive guy.”

Vokes also had his own crutch to lean on in the shape of Wales boss Chris Coleman.

Forced to watch as his international team-mates rampaged through Euro qualifying, he was always kept in the loop and returned to the side for vital victories over Israel and Belgium.

“When I first got the injury, it was around the start of the qualifying campaign,” says Vokes, who qualifies for Wales through his Welsh grandfather.

“That was a big blow because I missed the first four games. The boys had played really well and you naturally think ‘Will I get forgotten about?’

“But Chris was brilliant with me. Even when I was injured, he invited me down there for a few training camps and he kept getting in touch, kept making me feel part of the squad.

“It’s typical of the spirit. A lot of us grew up together through the age groups, so we’ve known each other for a lot of years. Everyone gets on and it is like going away to see your mates.

“I know everyone says it’s just Gareth Bale, but none of us is bothered. Honestly. We know Gareth is important. He’s done tremendous in the group stage and scored a lot of massive goals.

“But he’s got a good team behind him with a lot of quality and I’m sure Gareth will be the first person to say he couldn’t have done it without us.”

Having navigated his return to the Clarets side, the next step is to get back among the goals. A return of four from 23 games is, by his own admission, disappointing.

The route is clear: promotion with the Clarets and full steam ahead to Euro 2016 and that showdown with Russia, Slovakia… and England.

“There’ll be no split allegiances,” laughs Vokes, who was born in Southampton. “When the day comes, I’ll be 100 per cent Welsh.

“It’s taken us 57 years to qualify for a tournament and we won’t be going there to make up the numbers. It’s a group to attack, not be frightened of.”