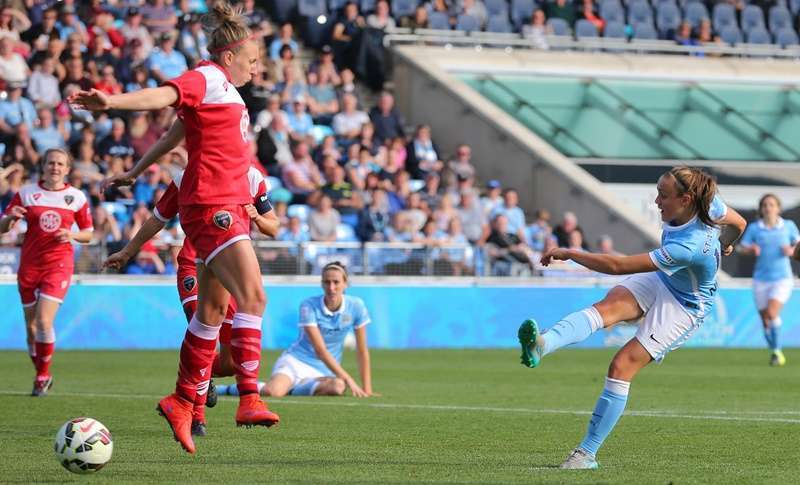 GEORGIA Stanway set Twitter ablaze last month after scoring a screamer against Liverpool. Now, England’s Lucy Bronze is urging her Manchester City team-mate to get used to the limelight after describing the teenager as ‘the future’.

Following an astonishing 35 goals in 15 games in the Women’s Premier League for Blackburn Rovers, Stanway turned heads at Manchester City and joined the heavy hitters in time for last season.

She hasn’t looked back since, making her first-team debut in 2015 at just 16 and scoring twice from the bench against Everton and Bristol Academy. She ended her maiden campaign with the club’s Rising Star award.

Now 17 years old, striker Stanway has picked up where she left off, scoring from 30 yards into the top corner against Liverpool in the SSE Women’s FA Cup last month.

The strike did the rounds on Twitter, while she also helped England qualify for the Women’s Euro 2017 in the Netherlands.

Bronze, who has 23 senior England caps to her name, believes the teenager is only just getting started.

“It was quite funny when Georgia came in with us last year,” she said. “She was a bit star struck at the likes of Toni Duggan and Jill Scott, and she was kind of gawping a bit in training. But she gets stuck in and she is not scared of anyone or anything,.”

Bronze was speaking at the launch of SSE’s new girls-only football participation programme.

“Last year she didn’t get as much playing time as she would have liked,” added Bronze, “but she understands she is young and she will be an asset this season.

“She is an unbelievable talent. She came on for us recently in a game when it was 0-0. She was chucked in the deep end and scored.

“She did not look out of place at all and she never has. She probably never will.”

Stanway couldn’t ask for a better club at which to learn her trade as she and Bronze are joined in the City ranks by Steph Houghton, Toni Duggan, Jill Scott and Isobel Christiansen, to name just a few.

However, the 2014 FA WSL Continental Cup is the only major trophy in the club’s history to date.

City were unlucky to exit the FA Cup at the semi-final stage last Sunday – going down 2-1 to Chelsea after extra-time – but Bronze still sees no reason why it can’t be a memorable year after they headed into the weekend top of the league.

“I think everything we are doing is a chance to make history – not only on the field but off it,” added Bronze.

“We have our own stadium, we have our own training pitches and we are setting the standard for everyone in the country, in Europe and the world.

“We are leading in that and now we want to be a world leader on the pitch.

“We don’t just want to beat teams, we want to do so by playing good football and we want to get the fans in. We are getting really good crowds in the stadium now.”

*This article was originally published in The FLP’s Women’s Football Weekly supplement on 24 April 2016.