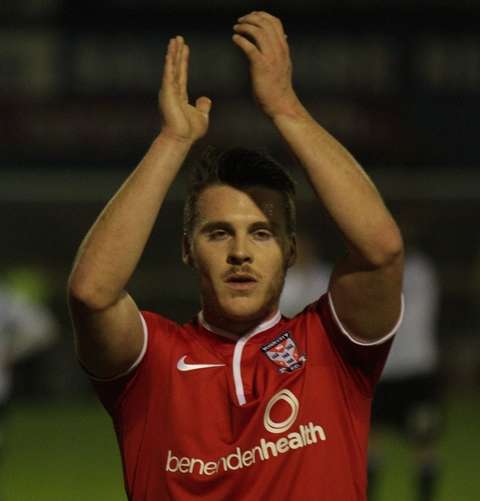 I always wanted to play like George Best when I was growing up because my dad loved him and always told me about how good he was.

I also liked Roy Keane a lot. He’s a Manchester United legend, and was always really passionate. I liked his ferocious style of play and he was a real general of the United midfield.

Adidas Predators. They were bought for me as a birthday present one year and I loved them.

I had a pair of the black and red ones that players like Zinedine Zidane and David Beckham used to wear.

It was the black and gold Manchester United kit with the ‘Sharp’ sponsor on the front.

I would have been about three or four when I had that and I was too young to remember who bought it for me, but I’d imagine it was a birthday or Christmas present.

I also had a few Tottenham kits growing up. There weren’t any Spurs fans in my family. I just took a fancy to their kits for a while before changing back to the Manchester United ones!

It was Ipswich against Scunthorpe at Portman Road. We won 2-0. I started the game and played about 70 minutes before being subbed. I thought I played pretty well, but I had a bit of first-game nerves.

It was for Ipswich against Crystal Palace at Portman Road in my third game for the club, so it was nice to get one so early in my professional career. I took the ball up the right-hand side and tried to take on the full-back. I saw a bit of space, so I hit it and the ball went into the top left corner of the goal – it felt great. We ended up winning 2-1 and I actually scored them both, so they were equally important goals.

I’ve never actually had a red card in my professional career, though I have put in a few nasty tackles in the past. Perhaps I should have had one or two. I’ve definitely got away with a few dodgy tackles in my time!