Home / Latest News / MLS? Southend will do for me, says Noel Hunt

MLS? Southend will do for me, says Noel Hunt 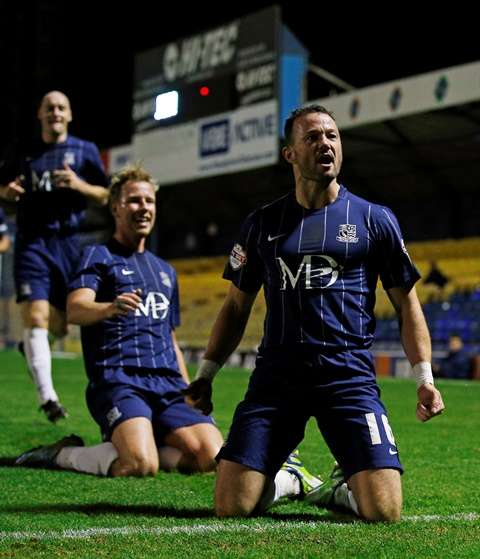 Southend’s Noel Hunt turned his back on a glamorous move to the States in favour of a switch to Roots Hall – a decision he doesn’t regret for one second.

Following his release by Ipswich, Republic of Ireland international Hunt was handed the chance to play in the US when he received an offer from MLS club Chicago Fire.

The luxurious lifestyle had lured the likes of Frank Lampard and Steven Gerrard across the Atlantic, but Hunt opted to remain here by signing for League One new boys Southend.

“There were a number of factors why I didn’t go to Chicago, the first being that I’d like to coach and manage in England after I finish in the game,” he explained to The FLP.

“I also didn’t feel it was the right time for me and my family to leave as I still had so many ties here.

“My wife, Alana, had just fallen pregnant, which made it difficult to go, so we decided to stay put and have our child in England.

“Fortunately, I received a decent offer from Southend and it all came together. Things have worked out really well.”

Heading into the weekend, the promotion-chasing Shrimpers were seventh in the table, outside the play-off places on goal difference.

With fellow promoted side Burton receiving the majority of attention, the 33-year-old striker is more than happy to slip under the radar as they creep towards the play-offs.

“That’s the way I like it – the less we get talked about, the more we can just carry on with what we are doing,” he said. “Teams underestimate you. So, for me, it’s a perfect way for us to keep pushing on.

“I don’t think we’re exceeding any expectations. The calibre of players we have, as well as the management staff, combined with the right mindset, will ensure you do well in these leagues.

“I won the Championship with Reading a few years ago and I’m still hungry for more silverware.”

Having spent a lot of his career playing alongside his brother, Stephen, at clubs such as Reading and Ipswich, the pair faced off for the first time in senior football last month when Noel’s Southend beat Stephen’s Coventry 3-0.

“It was nice to come up against my brother. It’s something we hadn’t done for a long, long time and it was the first time in professional sport.

“It was a nice little chapter for the family book, but it was three points on the line and we discussed the game at length afterwards.”

Though he still has a few years left in him on the pitch, Hunt is champing at the bit to get involved on the coaching side after a brief spell working with the U14s and U16s at Reading.

He said: “I’m due to do my UEFA B licence in June, but I had a taste of that at Reading when I worked with people like Eamonn Dolan, David Dodds and Lee Herron when I was injured for a year.

“I had this real thirst for it and I got a real insight into it from Eamonn.

“The way he speaks to the youth players and coaches made me see a totally different way of doing things and that is testament to how many brilliant young players they bring through.”