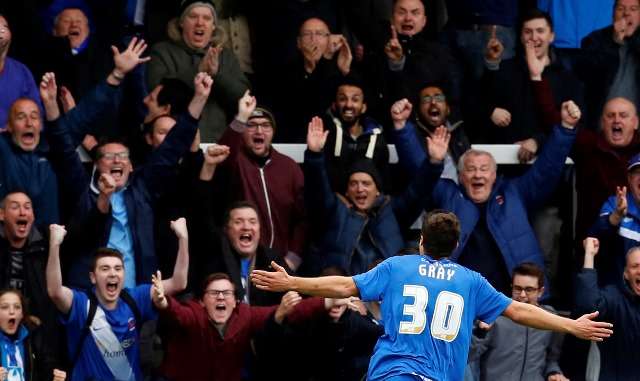 Hartlepool midfielder Jake Gray’s ambition to play first-team football knows no boundaries – the 19-year-old has moved 250 miles north to get his fix at senior level.

Gray made the temporary switch from Crystal Palace last month to try to add to a handful of league appearances he made while on loan with Cheltenham last season.

It was all a bit daunting at first, but he insists there were never any  issues about moving from London.

“The fans have been really good to me on Twitter and the coaches and players have helped me settle in really well,” said Gray.

“I’ve been put in a four-bedroom flat, and at first I was on my own.

“A few days later, a triallist came in for a couple of days and then, just before the Leyton Orient game, we signed Kal Naismith  on loan and he’s living with me now.

“Kal and I get on well and the first point of conversation is football as it’s the easiest thing to talk about.”

His dazzling displays in the heart of Ronnie Moore’s midfield earned Gray a nomination for PFA Player of the Month for League Two.

It’s an accolade he was shocked to receive as he insists the Pools fans haven’t seen the best of him yet.

“I’m quite surprised how it has gone,” he said.

“It was a great feeling to score my first professional goals against Orient – and being nominated for PFA Player of the Month was something else.

“I was so surprised I didn’t even realise until I was told, after it came out on Twitter.

“Everybody showed me so much support, which was really nice.

“I had a couple of good games but I feel like I have a lot more to give.

“It came as a surprise that I was nominated as I wasn’t there the whole month, but I definitely feel I have a lot more to give.”

Switching the attention to Tuesday’s FA Cup second round replay with Salford City, Gray believes the pressure mainly lies with their opponents.

The Pools, in his eyes, are the less favoured side to win by neutrals.

He said: “Everyone wants us to lose, so in a weird way we are the underdogs.

“None of us feels the pressure. We knew it was going to be a really tough game going to Salford and I don’t think anyone wanted that draw.

“It was a difficult game, but at the end of the day we could have won by two, three or more with the chances we had.

“First and foremost, we need to match their intensity and commitment and then, hopefully, our quality will come through.

“We’re confident enough we can do the job and get through to the next round.”

With his loan set to expire in January, where would Gray like to see himself for the rest of the 2015-16 campaign?

“I want to stay here at Hartlepool until the end of the season because I’m getting on really well and the manager seems to like me. I’m enjoying playing under him,” he said.

“I feel like I’m learning a lot as well, so I’m happy here. I don’t want go back and play U21 football as the level is much different to League football.

“Walking out through the tunnel and seeing all the fans here is a much better feeling.”

*This article was originally published in The FLP on 13 December