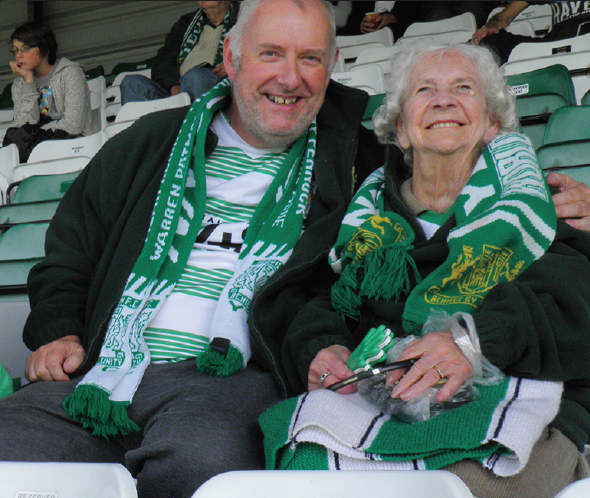 YEOVIL Town’s oldest season ticket holder has barely missed a game at Huish Park since 1998, but has never been able to see the team play.

Audrey Dyson, 91, is blind, but she has sat in the stands throughout the club’s rise from Non-League to the Championship – and the seasons following – having been a season ticket holder for 17 years.

Her remarkable commitment is set to become the subject of a crowd funded documentary, following the Yeovil supporter and her family.

Having been introduced to the Glovers by her son Nigel after the passing of her husband, her love for the Glovers has not wavered since and she still doesn’t like to miss out on match days.

“Last year I didn’t miss a home match,” she says. “Nigel did but I didn’t. I just got other people to take me.”

Audrey still remembers her first game fondly and recalls how she took in the atmosphere.

She said: “I had never been to a match or anything like that and so I said ‘yes, alright’ and that was a friendly against Stevenage. I went along and I sort of listened to it –

I didn’t take a radio or anything – I just listened to what was going on and what people were saying. Suddenly, there was this great ‘YES!’

“Everybody was jumping up in excitement because Yeovil had scored a goal. The feeling seemed to go right down tickling me all the way inside – it was ever so exciting. I went to a lot of games that season and then Nigel asked if I wanted a season ticket. We’ve sat in the same seats ever since.”

Audrey has a set match day routine before she heads to Huish Park with her son and grand-daughter Georgiana – who at two years old is the club’s youngest season ticket holder.

She said: “I always wear the same clothes; I wear the same suit and everything. I just get up, get ready, then Nigel and Lucy come and have lunch. We all go to the match together, leaving at 1pm.”

Film graduate and director Zak Campbell is hoping to raise £2,200 to fund the documentary.

He told The FLP: “I had this idea when I was at university and now I really want it to go ahead properly. We’ve organised dates to start filming and the crew are ready to go. She is a lovely woman and so down to earth. She just enjoys the feeling of going to the football.

“This is a non-profit film. We want to show how sport can bring families together and how it is more about going to a match together then the result.”