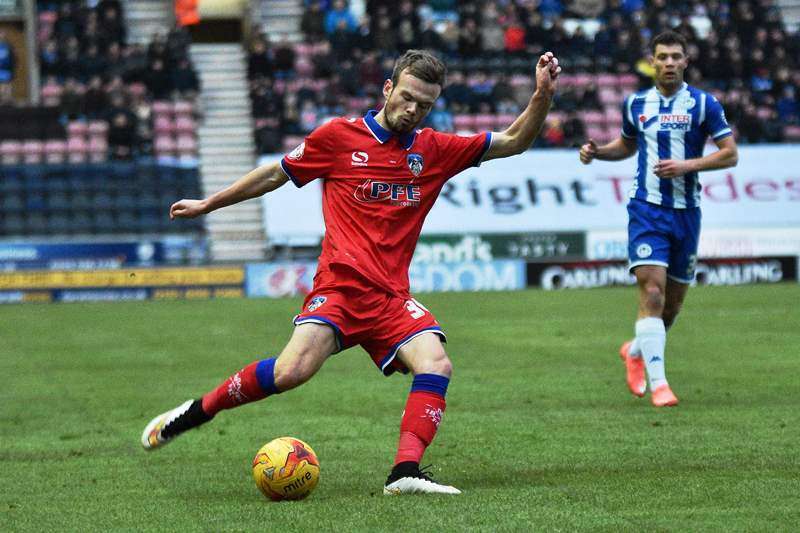 CAMERON Dummigan took a leap of faith when he swapped Northern Ireland for East Lancashire as a fresh-faced 16-year-old, but  with the help of Oldham Athletic it is beginning to pay off.

Born in Lurgan, County Armagh, and turning out for Cliftonville in his early teens, Dummigan was handed a shot at his dream job by Stuart Harvey in the summer of 2012.

Harvey – then Northern Ireland scout at Burnley and now head of academy recruitment at Championship rivals Blackburn, who also unearthed forward Shay McCartan for the Clarets – brought the young full-back to Turf Moor.

Last season looked to be a breakout year for the Northern Ireland U21 international, until surgery on a groin problem kept him out from September until May.

Undeterred, he made his way to the Latics on loan this season – and Dummigan looks as though he hasn’t missed a beat.

“Stuart brought me over,” recalled the 19-year-old. “He actually approached my parents, Anna and Colin, and they told me. I was just delighted to get a chance.

“My family and I talked about it, but it’s what I wanted to do. It’s a dream job and there is nothing more I wanted to do than pursue that.

“It was hard being away from my family as a young guy, but in my mind I knew this is what I always wanted to do.

“My parents came over for the first two weeks, just to settle me in, and they have been over a few times since.”

Dummigan says he had little problem adjusting and his early performances backed up that theory, as the marauding right-back was named Player of the Year in his first season with Burnley’s youth team.

He has certainly gained an admirer in Clarets manager Sean Dyche, who admitted last month he would not have signed both Tendayi Darikwa and Matt Lowton – from Chesterfield and Aston Villa respectively – last summer had Dummigan not suffered his injury setback.

“He encapsulates the modern full-back,” gushed Dyche, who is no doubt purring over the teenager’s displays at Boundary Park this season.

Dummigan added: “I was out the whole of last year, but you just have to take it on the chin and move forward.

“It was definitely bad timing. I was playing well and in the mix.

“The manager has brought in a couple of guys, but they push me more so it’s not a bad thing.

“It is just a learning curve and the same goes for the other players, too.

“This was my first loan move and it has turned out to be a great move. I have really enjoyed my time here and I had no hesitation extending it until the end of the season.”

And, before his thoughts return to a future with Burnley, Dummigan has much left to achieve with the Latics.

Oldham began the weekend inside the bottom four of League One, but they beat Gillingham and Peterborough in their last two outings – Dummigan grabbed his first senior goal in the latter – as returning manager John Sheridan begins to steer the ship back on course.

“I was absolutely delighted with the goal and hopefully there will be more to come,” he added. “It’s not often I get up the pitch and get the chance.

“We are playing well, so hopefully we can take that into the next few games and climb out of the bottom four.

“Nothing has really changed in recent weeks.

“There is just a better feeling in the group and everyone seems to get on really well. That’s the main thing.

“We are just delighted we are playing good stuff. It gives us more belief, but there is no use getting carried away.”