A love of football comes at no cost for Anthony Gerrard 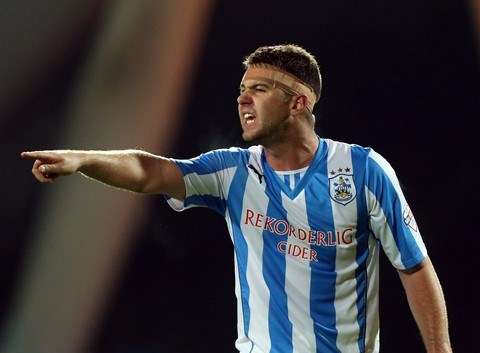 ANTHONY Gerrard isn’t your average footballer – so perhaps it shouldn’t be a surprise that he’d offer to play for free for Shrewsbury Town.

After being released by Huddersfield Town in the summer, the experienced centre-back could have expected at least a few offers to come his way.

But, aside from a short stint training at Southend, his phone has been alarmingly quiet. It’s not as if he’s a veteran yet either – at 29, he should be at his peak. Perhaps, as Gerrard believes, it’s his no-nonsense attitude that may have rubbed people up the wrong way.

“I don’t suffer fools gladly,” admitted the Merseysider. “In football, managers often treat players as if they are stupid. I don’t feel that’s right. You don’t have to like me, but respect me as a footballer and a person.

“Managers don’t like a player to ask questions, but when I’m not playing I want to know what I need to do to get back in the team – and I go about it the right way. I don’t go in all guns blazing, I don’t demand to play, but give me your reasons.

“Football is a fickle game and I gave up trying to make sense of it all a long time ago.”

So then Gerrard decided to offer his services to Shrewsbury free of charge and take matters into his own hands. It might seem like a desperate gamble, but it could prove to be a winner for both parties.

The former Walsall and Cardiff defender can get minutes under his belt – he came on as a substitute for his debut in the 2-0 win against Bury last weekend – while the Shrews get a Championship-quality defender to help their adaption to League One.

“People label footballers as mercenaries, but I’ve gone against the grain,” he said. “I can’t do much more than to offer to play for free in the Football League. Not many people would do that.

“I can’t play for free forever – I’ve got a family to support – but I’m just looking to play football now and get some of the enjoyment back.

The lads, the manager (Micky Mellon) and the coaching staff have been fantastic with me. I’m looking forward to starting a match and getting my season fully underway.”

As for the long-term, the Scouser, the cousin of LA Galaxy’s Steven, has learned not to look too far ahead – though he believes he could still cut it in the second tier.

The ex-Walsall and Cardiff defender said: “I’m grateful to Shrewsbury for giving me an opportunity and I’m there until January. However, I want to get back to the level I came from.

“Shrewsbury have given me a platform and it would have been unfair of me to take a wage for a short space of time. Let’s see what happens. Who knows, they may offer me a contract in the future.

“Defenders are in their prime between 28 to 31, so I still think I’ve got a lot to offer.”

And if he does get back to the Championship, then Gerrard will no doubt be keen to show Huddersfield that they were wrong to let him go.

“When Chris Powell (manager) came in, he said I would be a big player for him, but I never got the chance to show what I could do.

“I got strung along and I thought that I deserved better than that as an experienced player,” he added.

“Eventually I was told I could go out on loan (Gerrard went on loan to Oldham in March), but it would have been better if that had happened earlier and I could have showcased what I could do.

“If he didn’t want me, let’s shake hands and move on. It left a sour taste in the mouth.”