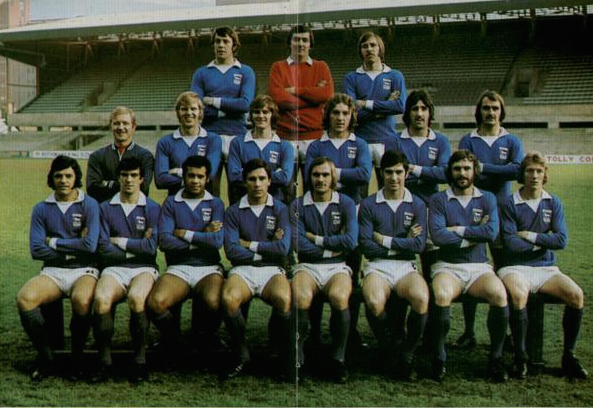 TREVOR WHYMARK says that it was a special moment in his career when he helped Ipswich Town lift the Texaco Cup at the expense of local rivals Norwich City.

Norfolk-born Whymark was rejected by Norwich as a youngster but went on to play for England as well as score one of the goals to hand Ipswich local bragging rights.

The Texaco Cup was created by the American petroleum giant to help promote their purchase of the Regent filling station chain.

Entry was by invitation with nine teams from England competing against seven Scotland sides on a home and away basis with games spread out through the season.

Ipswich were already 2-1 up from the first leg at Portman Road thanks to a Peter Morris brace when they arrived at Carrow Road for the return leg.

And leading scorer Whymark all but finished off the Canaries with the first goal to send the vast majority of the 35,798 crowd into a deathly silence.

2-1 second leg win, Clive Woods, who was also from over the border, it was a special moment.

“We got invited into the competition and it really stood us in good stead because we won the Texaco Cup and also went on to qualify for Europe after finishing fourth in the league,” said the 65-year-old.

“It was good experience – we played an awful lot of games that season.

“I had trials at Norwich as a youngster but was rejected by them and it gave me a little bit of extra incentive to do well and to show them what they had missed.

“I must admit that whenever I played in the derby games, Carrow Road always seemed to have a better atmosphere and as soon as you walked out onto the pitch it hit you.

“I remember the goal pretty well. The ball came over and I was the first one to react to it, catching it on the half volley, and it went straight in the top corner.

“I live closer to Norwich than Ipswich these days and I frequently go out in Norwich, but thankfully I am at the age now where nobody recognises me!”

Mick Hill: The forward was a taxi driver for a company in Hereford but sadly died in June 2008, aged 60.

Rod Belfitt: A centre-forward who is now retired in Ackworth, South Yorkshire. Worked as a draughtsman and for the Inland Revenue before becoming a financial advisor.

Glen Keeley: Central defender who ran a pub, but has been working as a football development officer in Bolton for the last ten years.

John Peddelty: A central defender who is now retired after spending 28 years as a policeman in Suffolk.

Laurie Sivell: A goalkeeper, he had the part of the German keeper in Escape to Victory. He lives in Beccles, Suffolk, and has his own fishmonger’s business.

Derek Jefferson: The centre-half was a pharmaceutical rep. A committed Christian, he set up a charity, Sports Pursuits, and taught PE in Birmingham schools.

Frank Brogan: The winger is now retired. Lives in Falkirk, Scotland, after owning a series of pubs with his brother as well as a taxi firm.