Leyton Orient’s staff have published a statement as they continue to await payment by the club’s owner Francesco Becchetti.

Orient’s coaching, medical, commercial and stadium staff have not been paid their wages for March, with the same applying to players but for the intervention of the PFA who have loaned first-teamers half of their wage packet.

And with the payment date for their wages for April fast approaching, workers made public their hopes for communication and action by multi-millionaire Becchetti.

The statement read: “As staff of Leyton Orient Football Club we have become hugely concerned by the lack of communication issued by owner Francesco Becchetti and its directors.

“Having not received our wages for the month of March 2017, staff were told to expect payment on April 6 due to an issue regarding the club’s bank account.

“However, on the eve of the date promised, staff were informed that they would have to wait a ‘few days more’ for their wages.

“Following this a formal grievance was raised by club staff in line with the club’s policies and procedures, though to this date it remains unacknowledged with no indication as to when, or if, we are to be paid.”

Photographer Simon continues to do his job at the O's yet he has not been paid since October and does not expect to be paid again. pic.twitter.com/pL7LphwUVZ

Becchetti has withdrawn from the day-to-day running of the League Two club in recent months following the team’s poor run of results. Combined with a Fans’ Trust’s protest calling for him to become more transparent in his operating of the club, Becchetti is understood to have not attended an Orient match since last November.

Since then the club have exchanged the wooden spoon with Newport County to become the basement club of the Football League, and were served with a winding-up petition by HMRC and other unpaid creditors.

Though Becchetti did not attend the hearing in London in March, HMRC confirmed to the courts that the sum they were owed (believed to be £250,000) had been paid.

At the hearing, chief executive Alessandro Angelieri claimed the club’s owner was taking steps to inject £1million into the League Two side’s funds ‘over the next six to eight weeks’.

A claim which earned the case an adjournment in order to give Becchetti time to pay the outstanding debts owed to six creditors who joined the HMRC in the petition. This included the club photographer; the company who operate the stadium’s stewarding on matchdays; and the local council, who are owed £36,000.

Orient’s unpaid staff continue to travel to Brisbane Road to work for free, but alluded to fate the club faces given the rising debts.

“The winding up order issued at the start of March saw the club taken to the High Court, and on March 20 it was claimed that the amount of £1million is to be put into the club to ensure all debts that have been generated over recent months would be paid in full by June 12 when the club are next due to appear in court.

“With debts continuing to mount and us as staff not being paid our contractual wage, it raises questions as to whether the directors are on course to meet this arrangement.”

Leyton Orient Fans’ Trust have actively campaigned against Becchetti’s ownership since they were made aware of the winding-up petition and the impending threat of administration or liquidation.

Their Regeneration Fund, approved by members at a special general meeting, has seen the football family contribute to its current total of £123,250.

The Fund has a number of ways of being utilised; one being a purchased stake in the club should Becchetti negotiate the sale of his 90 per cent of shares to another buyer. While it may also be used to fire a phoenix club in the ‘worst-case scenario’ that the O’s and their 136-year history are made insolvent and liquidated.

Orient face Crewe Alexandra at Gresty Road where defeat would spell their relegation to the National League.

No comment has been made by the EFL nor the FA.

Statement by Orient staff in full: 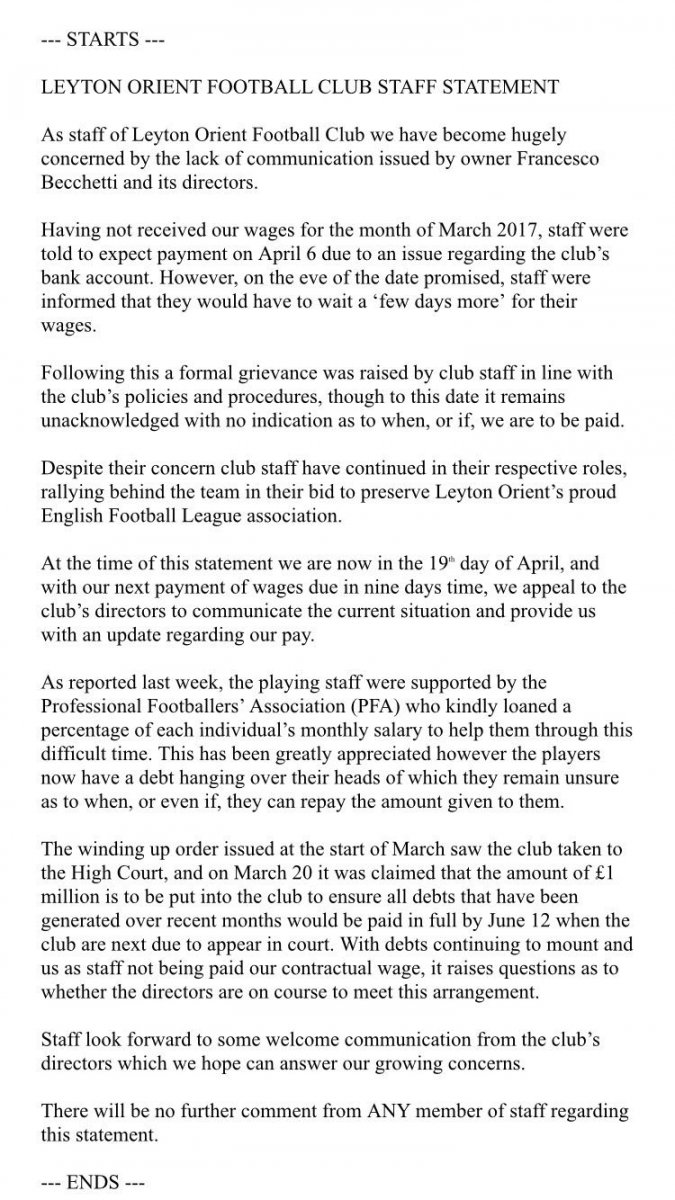