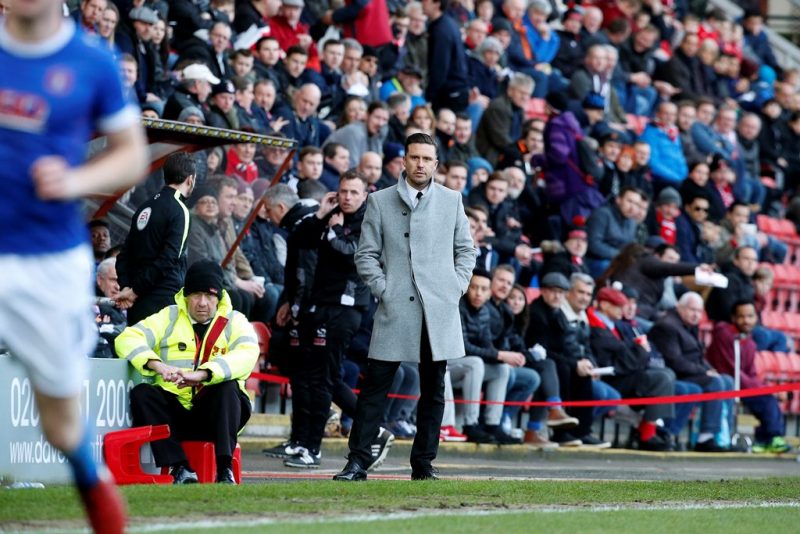 AS LEYTON Orient slipped to a 1-0 home defeat against Morecambe in midweek, Danny Webb learned another lesson about the brutal reality of management.

At the age of 33, Webb, son of former Chelsea star David, took the reins two weeks ago after Andy Edwards decided that a coaching job with the FA guaranteed better job security than the Matchroom Stadium hotseat.

You couldn’t blame Edwards. Since Francesco Becchetti, pictured below, bought out Barry Hearn in the summer of 2014, the O’s have been on a downward slide and have worked their way through nine managers.

Webb is the fourth this season, following in the footsteps of Andy Hessenthaler, Alberto Cavasin and Edwards. Yet having stepped up from assistant to boss, the former Southend, Cambridge United and AFC Wimbledon striker hasn’t had it easy.

First up was a home match against Carlisle. The O’s went 1-0 up through Gavin Massey, but the promotion-chasing Cumbrians rallied to win 2-1.

If losing that first game in charge was no real surprise given how strong Keith Curle’s men have been this term, then Tuesday night against the Shrimps was seen as a real opportunity to break a run of five successive defeats that had seen the east London outfit drop into the relegation zone.

Indeed, even a draw would have been enough to lift Leyton Orient out of the bottom two, above Notts County – now managed by ex-O’s boss Kevin Nolan – on goal difference.

Orient were the better team in the first half, especially in the closing stages when they built up a head of steam.

As a dapper Webb urged his team on from his technical area, the lively Massey was foiled by experienced Shrimps keeper Barry Roche, centre-back Tom Parkes shot inches wide and Massey sent a low cross fizzing across the six-yard box without anyone being able to get a decisive touch.

However, the O’s couldn’t find the same momentum in the second half and Jim Bentley’s Morecambe, unbeaten in 2017, began to look dangerous. The evergreen Kevin Ellison, still a real threat at 37, was denied by a superb save by teenage O’s keeper Sam Sargeant.

But the youngster was powerless to prevent Paul Mulllin netting a wonder goal for Morecambe 18 minutes from time, the striker curling a magnificent 25-yard effort into the top corner.

The O’s huffed and puffed, but, in truth, didn’t really look like finding an equaliser. It meant they stayed second bottom, used up their game in hand and have lost 12 of their 16 home games this term.

A paltry crowd of 2,660, the lowest league gate of the season, turned up and you could have excused them – bar the Morecambe 58 – for turning on their team. But instead of a chorus of boos, there was applause and chants of ‘Orient, Orient’.

These fans recognised that their team had given their all on the night and had had a go. Their vitriol is saved for despised owner Becchetti. When the Italian businessman arrived, the O’s had just lost the League One play-off final on penalties.

Since then they’ve suffered one relegation and are now trying to stave off another, which could bring the curtain down on more than a century in the Football League. 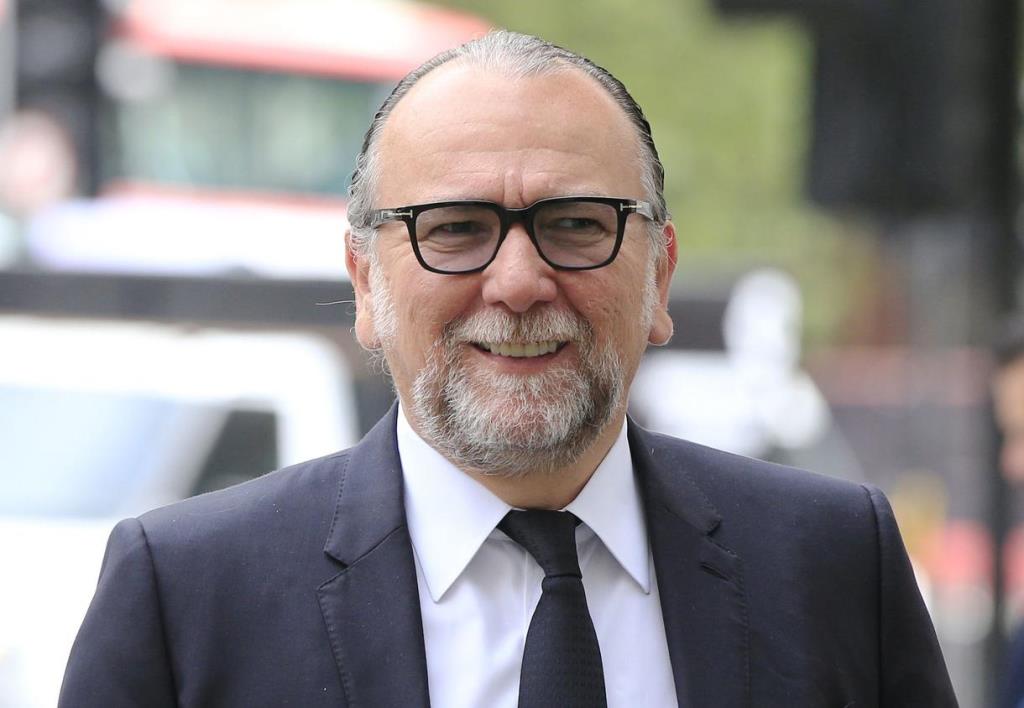 All money, no logic: Leyton Orient owner Francesco Becchetti’s bid to bring Championship football to E10 has seen the club unravel since he took over in 2014

Webb has tried to take the positives despite failing to earn any points from his first two games in charge. As the press pack gathered round, he spoke in calm but assured tones.

“Rightly or wrongly, I’ve gone into this job with my own structure of the club in my head,” he said.  “The best clubs and the best teams in our league have a structure and if it’s a step forward and two back, then so be it – and I don’t mean relegation by a step back. Sometimes you might have to suffer a few defeats to get your message across.

“I understand the fans´ frustrations at not picking up any points in the last two games but I have to be perfectly honest and say that on Saturday and today I’ve been proud of a lot of those players, if not all of them.

“A lot of youngsters are looking like men out there and the senior pros ain’t half helping them as well.

“I want to assure the O’s fans that we’re going to stick at it, we’re going to keep going.  It would be a different story if they’d seen two performances with no light at the end of the tunnel.

“There is light and they’ve got some good youngsters coming through here. I think the future of the club on the pitch is looking good and hopefully we can get a few points before we get caught adrift.”

Smartly dressed in a navy suit and with a slick hairstyle, it looked like Webb was there for a Topman photo-shoot, but it’s three-pointers – and not fashion-pointers – he wants to give. And he took the Morecambe reverse with a dose of realism.

“That’s why teams are down the bottom,” he said. “They concede and they don’t score. But I can’t look at our back four tonight and go ‘oh, no, you’ve been awful, you’ve given them goals’.

“I can’t look at Parkesy and say ‘you’ve missed a good chance which has cost us the game’. He puts his body on the line every week and played with tonsilitis at Portsmouth. People don’t see those sort of things that go on.

“The players do care, they all care in there, young and old. I’m starting to form a little bit of team spirit there, togetherness, and I think you’ve seen an improvement tonight in how we played.

“We’re down the wrong end, but if they keep showing me things like tonight on and off the ball, I think we’ll be alright.” 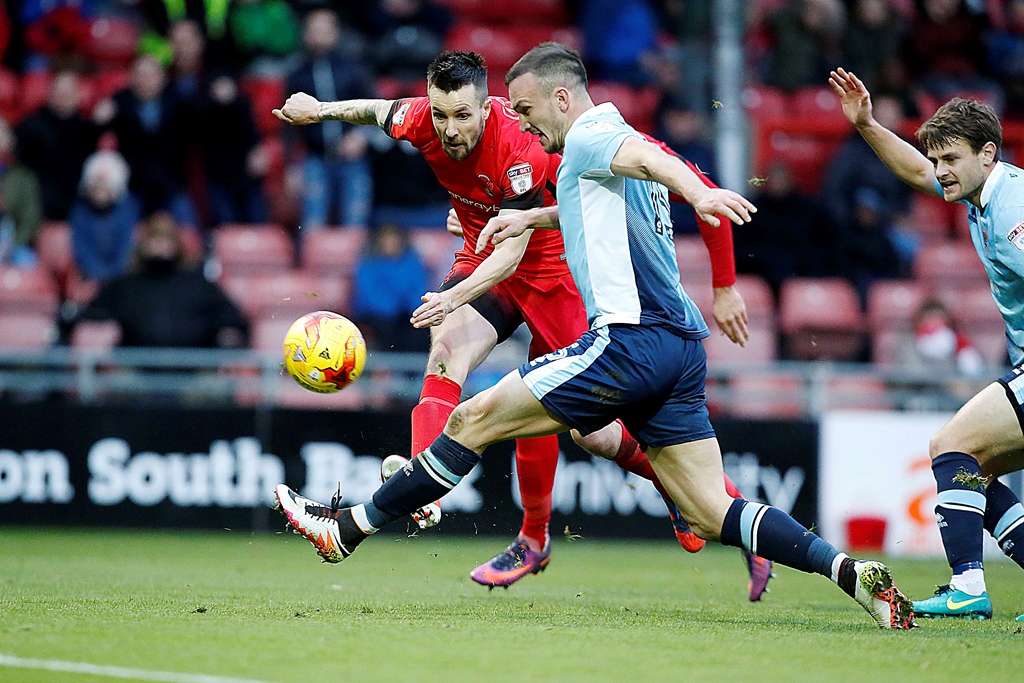 Midfielder Michael Collins is confident Webb is the right man to keep the O’s in the EFL, though it promises to be a hairy last few months of the season. Indeed, the next few weeks could be crucial.

After taking on promotion-contenders Plymouth in midweek, Orient play three of their relegation rivals – Notts Co (Feb 18, h), Cheltenham (Feb 25, h) and Newport County (Mar 4, a) – in  rapid succession with a game at Stevenage sandwiched in between (Feb 28).

“We have to remain as positive as we can,” said Collins. “The gaffer has certainly tried to do that since he came in and we have to keep a level head. We have to keep believing.

“He’s done a good job since he’s come in in trying to lift the lads. He’s given us a bit more freedom to play. We’ve got talented wide men in Gavin (Massey) and Sandro (Semedo) to try to give the ball to one-on-one and see if they can make things happen.”

The 30-year-old also believes Orient have another factor in their favour in the run-in – their supporters.

“Another massive positive for us at the minute is that the fans are right behind us,” he added. “It’s a tough time for everybody and they’re sticking with us. That’s a big thing for the players.”

Whether the O’s win their battle remains to be seen. The National League is in the rear-view mirror – and time is fast running out.

*This article originally featured in The FLP’s 12 February 2017 edition.