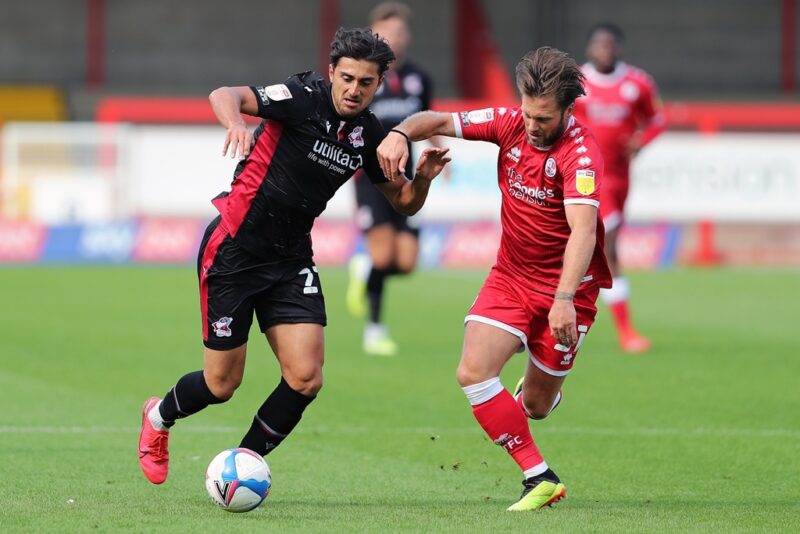 Joe McNerney. We are birthday brothers and he lives a stone’s throw away from me so we socialise a lot outside of football.

He’s my roommate on most away days as well. We are both quite laid-back characters, so it works well.

I’m not 100 per cent sure who would be the tightest but I wouldn’t like to have a dinner cooked by Sam Ashford – his cooking skills are said to be a bit off the wall!

He’s living with a few other players and some of the stuff he comes up with is a bit out there.

Brian Galach has a lot of designer gear which is pretty out there. He has all kinds of stuff and everything is labelled.

It’s either him or Ashley Nadesan. He wears tracksuits with Adidas Yeezy trainers as well – I don’t think the stuff he wears is necessarily bad, it just looks terrible on him!

Tarryn Allarakhia tries to put his music on and Joe McNerney likes his house tunes, but the DJ is our kitman Marcus Doyle.

He’s a few years older than me and he’ll put some 80s or 90s bangers on that you can actually sing along to. Proper music!

The younger lads will say ‘who the hell is this?’ when an Oasis track comes on – the music emphasises the generation gap…

There is a car school of David Sesay, Ricky German and Ashley Nathaniel-George who are pretty lazy. Nathan Ferguson was late a few times last year as well.

Those guys will stroll in on the dot or just before – we have fines in place, so there’s always a big cheer when someone is late.

Lewis Young. He’s helping out the coaching staff with video analysis so they spend a lot of time together, they are touch tight! He’s like a nodding dog at the moment – ‘yes sir, no sir’.

Tarryn Allarakhia likes a bit of a boogie, he thinks he’s got a bit about him on the dancefloor. Ricky German does as well but I’m not sure I’d call it dancing…

I don’t mind a dance – but it depends what music it is.

Sam Ashford. He will go hard to try and keep up with the big boys and end up doing something silly.

Ricky German says he’s the best at everything but I think Ashley Nadesan is quite good. He plays it an awful lot – I don’t think he sleeps.

The lads were comparing their stats on there this week. That’s mainly the younger lads – I’d be surprised if I’m still included on the game, they probably retired me years ago!

I’ve got a few tattoos, Joe McNerney’s got some dodgy ones – there’s quite a few flying about actually.

Reece Grego-Cox is a triplet so he has all their names on his arm with the times they were born on a clock. He’s got Zeus on his arm as well but I’m not sure he believes in mythical Greek Gods. It’s all about what looks good – then you can make up a story afterwards.

Probably Tony Craig. He’s old school, knows the game inside out and it wouldn’t surprise me to see him make the step up. He’s got an old head on old shoulders!