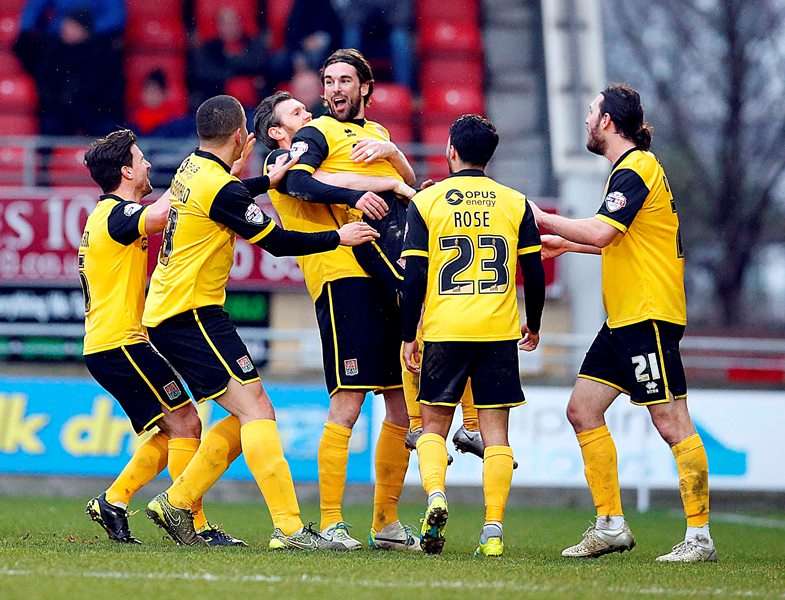 RICKY Holmes could quite  easily start preparing for his first ever campaign in the third tier of English football – but last weekend’s match-winner insists no one at Northampton Town is getting ahead of themselves just yet.

Wide man Holmes has had to be patient this season, coming off the bench in the first three games of the campaign before being kept on the sidelines by groin and back injuries.

That meant that his first start of the season only came on January 2, the 28-year-old marking the occasion with a sublime winner for the Cobblers in a 4-3 thriller against Luton.

And ever since Holmes has been making up for lost time as heading into the Easter weekend the tricky winger had netted seven times.

Last weekend’s strike was certainly seventh heaven too as he curled home a beauty deep into injury time to see the runaway leaders come from 2-0 down to beat Stevenage 3-2.

For a man who started his career at Non-League Chelmsford City before spells with Barnet and Portsmouth, Holmes could be excused for already planning his maiden adventure in League One.

But Holmes, who arrived at Sixfields Stadium permanently last January after impressing in an initial one-month loan, is adamant this couldn’t be further from the truth.

“I would be lying if I said I didn’t have one eye on League One, but there is still a job to be done this season,” said Holmes.

“We are taking it game by game. We are not the type of team that looks at games in chunks of threes or fours – we are simply just trying to get as many points on the board as possible. For me, having come from Non-League football, just playing at any level of the professional game is an achievement.

“But I want to play as high as I can and I think that as soon as a player doesn’t aim for the top then that is when you are failing. So of course I would love to play in League One and as high as I possibly can, but we have a job to do first.

“This league is relentless but it is credit to the management and staff for getting the strength in depth that we currently have.

“Fresh legs in League Two is a huge advantage and it is great to see the squad we have got here and I believe it is one that can get us to the next level if we keep our heads down and keep working hard.”

Few should have been surprised by Holmes’ winner last weekend with the winger seemingly on a one-man mission to create his very own Goal of the Season list – strikes against Leyton Orient, Dagenham and MK Dons are also worth a watch.

“I’ve scored some nice goals this season but the winner against Stevenage was up there because of the manner of it and what it meant, helping us win after being 2-0 down,” he added.

“This team doesn’t know when it is beaten. We showed that as we could have thrown in the towel, thinking that we have plenty more games left, but we didn’t.

“I hope I still have a few more goals in me. I was out injured for a long time, but hopefully I can keep going now and hit double figures. I think that would be an achievement, especially for a winger.”

*This article was originally published in The FLP on 27 March.