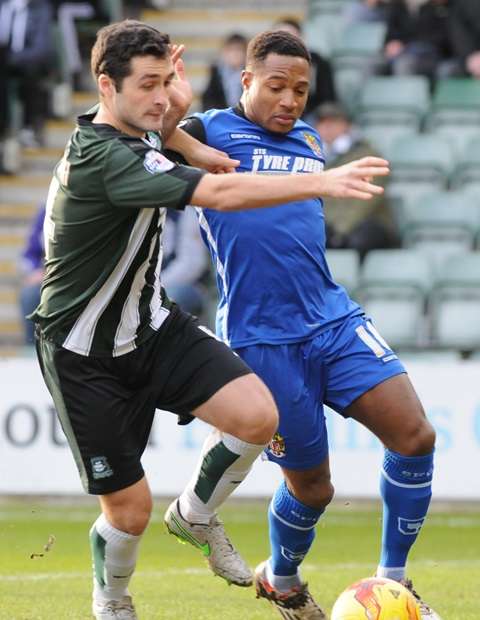 Stevenage striker Aaron O’Connor admits he was shocked to discover manager Teddy Sheringham had been sacked as manager – less than two hours after signing the Forest Green forward after a successful loan spell.

At around 3.30pm on transfer deadline day, striker O’Connor completed his move to mark a permanent return to the Football League.

However, at 5pm, the former Manchester United and Tottenham frontman Sheringham was relieved of his duties as Boro boss.

With Sheringham’s pedigree a sound reason for any striker to want to play under the 49-year-old ex-England man, O’Connor insisted he is still happy with the choice he made to sign at the Lamex Stadium.

“When I signed, as far as I knew Sheringham was going be here as he was the one who wanted me here,” O’Connor told The FLP. “I found out he was gone later than most.

“It was disappointing as he was the one who brought me in.

“Playing under a manager who has already seen me and signed me permanently gives you that little bit of confidence.

“But I don’t think any player is going to sign for a team for the sake of one person.

“You still have your livelihood to think about and your family to look after.

“I genuinely thought he was good enough to get things right and it’s not been easy for him with all the bad luck and injuries.”

Despite notching ten goals in 39 League Two games last season with Newport County, O’Connor was allowed to move on from Rodney Parade and look for pastures new.

“It was disappointing to leave Newport in the first place,” he said. “But once I knew that was going to be the case I weighed up all the options, like where I was going to move to and salary wise, to support my family.

“At the time, staying in my house in Cardiff was important and I could drive to Forest Green every day with people like David Pipe and Darren Jones.

“I knew the club’s ambition and I was surrounded by quality players, so I thought at the time it was the best decision for me.”

With nine goals in 16 matches, the 32-year-old had hit the ground running in the National League as he spearheaded Forest Green’s attack.

However, after struggling to hold down a place in the starting XI towards the back end of 2015, O’Connor was looking to move away from the The New Lawn – but found many of his avenues blocked off.

“At the start of the season, I was in the Forest Green team, playing and scoring,” he said. “I had been top scorer for them for most of the season.

“As far as I believe, I did the job they brought me in for and the only reason I left was because I wasn’t playing.

“There were offers for me to join other clubs near the top of the Conference, but Forest Green didn’t want me to move to a promotion rival, which I understand to a certain extent.

“Then there were a few teams towards the bottom of the league that showed interest, too, but when the opportunity came from Teddy Sheringham to play at Stevenage it made sense for everyone for me to go there.”

Now signed on a permanent contract, which runs until the end of the 2015-16 campaign, O’Connor is pleased to finally be settled at his new club.

“I’m delighted to be back in the Football League,” he said.

“Now I know there’s no more confusion and no more back and forth between clubs. I can be settled and get my head down and focused.”