Where are they now? Plymouth’s third division runners-up 1975 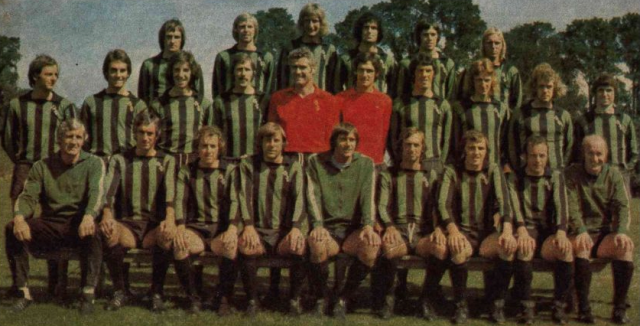 BILLY RAFFERTY admits that he never had another strike partner like Paul Mariner after they contributed 47 goals to help Plymouth Argyle finish Division Three runners-up.

The pair spent only two seasons together, but it is still a partnership that lives long in the memory of Argyle fans of an older generation.

Rafferty was a journeyman who was out of favour at Blackpool, but he was remembered by manager Tony Waiters from his time at Coventry City.

Mariner, who went on to play for England, was still a rough- around-the-edges youngster discovered playing junior football in Lancashire but he had an eye for goal.

The pair found the back of the net 27 times after Argyle returned to the Second Division and Rafferty wishes they had played together longer.

“Paul was still fairly raw as a player,” he said.

“Just in that first year, when we came together, you could see he had all the potential.

“I have never had another partnership like it. We just seemed to be on the right wavelength.

“It was strange because, in a lot of ways, we were very similar in our style of play.

“What I think made it work was there weren’t two centre-forwards who played just like a target man.

“We were both able to hold the ball up and bring each other into play.

“We were good in the air but also turning on players, running past players and getting in behind defences.

“The thing that made it work was that we worked really hard for each other.

“We created space for each other. It was just fantastic. I was really sad our partnership lasted for only two years because, when I think back on it, it was the most enjoyable time of my whole career.

“I had other partnerships that were very good – and I did score goals playing with other people as well – but that season was something very, very special.

“Every club has its icons and heroes, but what’s nice now is that when Paul and I go back to Plymouth, it’s Mariner and Rafferty that everybody talks about after all this time.

“Plymouth is a place that holds very special memories in my heart.”

Tagged Plymouth, Plymouth Argyle, Where are they now?