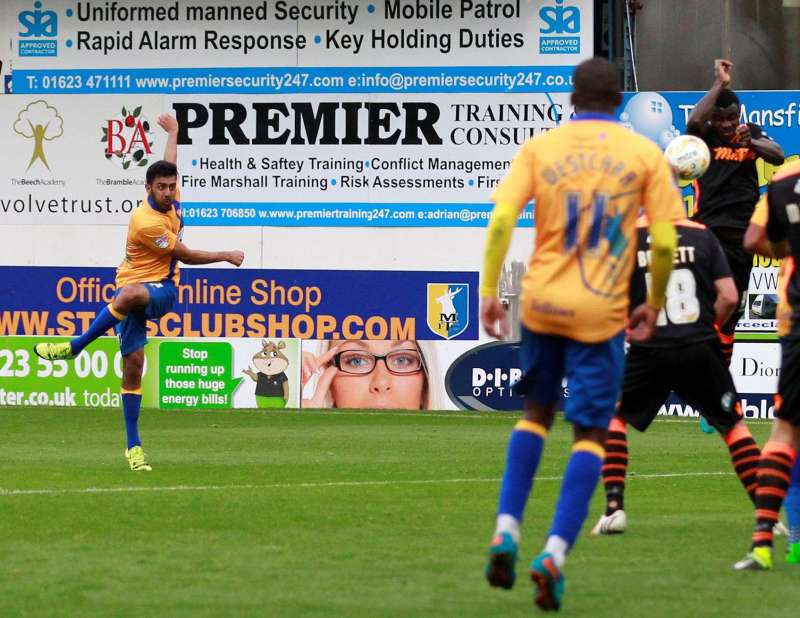 It’s one thing to score a stunning volley from over 20 yards out to win League Two Goal of the Week, but it’s another to do it two Saturdays in a row.

Maybe a striker could manage the feat, but a left-back? Yet that’s exactly what Mansfield Town defender Malvind Benning has achieved with his two stunning strikes in the space of a week.

Having opened his account with a spectacular long-range free-kick on the opening day of the season, Benning’s back-to-back screamers against Dagenham & Redbridge and Newport County have earned him numerous accolades from fans and pundits alike, but he admits his wonderful volleys have surprised him more than anyone else.

Benning told The Football League Paper: “I really don’t know where they came from! I said to my dad after the Dagenham game that I didn’t think I’d ever do that again – even in training.

“It’s one of those where the ball has just fallen and you think ‘why not have a shot and see what happens?’ One time it might go over the bar, but the next it could go in.

“There is an element of luck in that they’ve gone in, but I wouldn’t say too much – I’ve managed to hit them sweet. It is technique and I’ve worked hard on that. I’m glad it’s paid off.”

The 21-year-old left Walsall in the summer after his contract at the Banks’s Stadium wasn’t renewed, but Benning insists he is far happier now playing regular football with the Stags, having started every match in the league so far this season.

“I was in and out of the team at Walsall, but I’m thankful to them as they were the ones that helped me get into football” he said.

“I’m enjoying the regular football and I’m going to work hard to try and stay in the team and play as many games as I can, which is one of my main aims this season.

“It’s not nice to be released, but it was the end of my time there and (manager) Dean Smith told me it was best for me to go and play games.

“Mansfield came about and it was a good opportunity for me after hearing what the manager Adam Murray had to say. I’m happy I’m here now.” 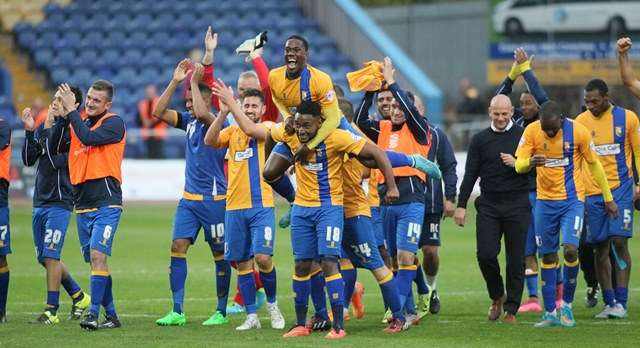 The Stags celebrate their win over Newport (Photo by Richard Parkes)

With the Stags riding high in the play-off places in League Two, Benning is full of praise for rookie boss Murray, 34, who signed a new contract on Friday, although its length remains undisclosed.

“I think he is a great manager, one of the best I’ve worked with,” he said.

“He knows the game inside out, he played for a long time and I’m learning quite a lot from him.

“He’s focused on the areas of my game I need to improve on and worked on them with me in training.

“I’m enjoying it all at the moment and I think I can learn a lot from him.”

Born in Birmingham, Benning comes from an Asian background with his family all originating from Punjab, India. Although he has plenty of time to decide about his international future, the young defender is in no doubts who he’d represent if the opportunity came about.

“I’ve said in the past and I’ll say it again that I would definitely play for India, but it’s up to their policies which I believe need changing,” he added.

“There are technicalities like having to swap your British passport for an Indian one which is one of the main rules stopping players from doing it.

“If that does change I’d be looking to go into it as soon as possible, if I get the call-up that is.”