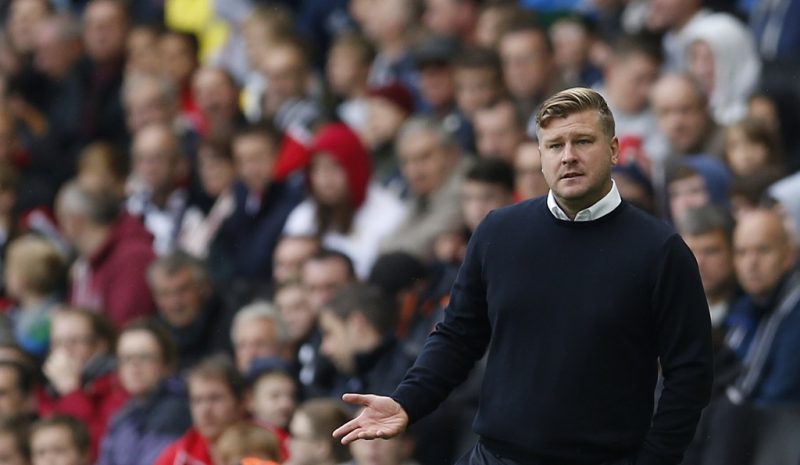 Charlton Athletic manager Karl Robinson has blasted his players, and said they have to stand up and be counted after their third straight defeat last night.

Despite Ricky Holmes scoring a hat-trick, the Addicks slumped to a 4-3 defeat at the hands of Shrewsbury, a result that leaves them languishing in 15th place.

After a terrible season in the Championship last year, things have not been better this term, despite signing Nicky Ajose, last season’s League One top-scorer, and having two managers experienced at this level – Russell Slade at the beginning of the season and Robinson since November.

The possibility of back-to-back relegations is not out of the question, with the London side just six points clear of the bottom four, and Robinson said: “For too long too many people have dodged bullets, and the manager has always been the one who gets it in the neck.

“I have to take responsibility as well, because I am the manager, and so do my staff, but ultimately we are not going on the pitch. We’ve not won enough games on the pitch.

“It can’t be [down to] six, seven, managers. It can’t be the lack of funds that have gone in. At some stage players have to stand up and be counted.”

Charlton captain Johnnie Jackson was equally scathing after night’s away defeat, that had seen the Addicks lead 2-1, and he questioned the mentality of his teammates.

The 34-year-old midfielder told the club’s website: “Obviously, we’re falling short somewhere – whether it’s mentally or physically on the pitch or both.

“I think we’re showing a fragile side of ourselves mentally where we’re conceding so many goals in quick succession in games.

“I can only speak for myself, in far of what it means to play for this club, but sometimes it’s not enough or there’s not enough of us that feel that way. Maybe it’s reflected in performances.”