Home / Latest News / Edinburgh has an eye for talent

Edinburgh has an eye for talent 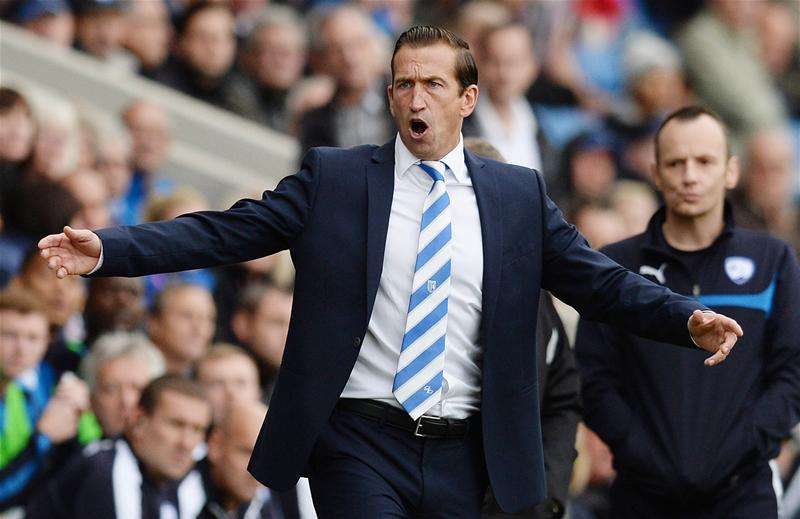 When Lee Tomlin became a Premier League player having sealed a £3.5m move from Middlesbrough to Bournemouth in August, Justin Edinburgh’s phone soon lit up.

“He sent me a text straightaway saying ‘You always told me I’d get there Gaffer!’ – and I knew he would from the first training session I worked with him,” says the Gillingham boss of the ex-England C international he sold from the now-defunct Rushden & Diamonds to Peterborough five years ago.

It’s Tuesday lunchtime and we are in the café area of Brentwood’s Holiday Inn. Even though Edinburgh’s Gillingham side have a Johnstone’s Paint Trophy tie with Luton that evening, he has arranged a game for the League One club’s development side in the afternoon.

After an hour with The FLP, he is meeting the opposition coach to lead them down to the Kent club’s training ground.

It is a select team from the Barnet & Southgate College his assistant David Kerslake worked with as part of the Tottenham Hotspur Foundation Programme, and from which his latest “gamble” Emmanuel Osadebe came in the summer.

The 18-year-old midfielder, who scored inside seven minutes of his opening day debut against Sheffield United, joins a long list that started with Nathan Elder and Chris Whelpdale at Billericay, and has included the likes of Wolves’ Lee Evans, Peterborough’s Conor Washington and Manchester United’s Regan Poole at Newport County.

Edinburgh doesn’t want to miss any potential stars who could make the kind of jump Tomlin has – and which the manager himself wants to make.

“Tommo has the best first touch of any player I’ve worked with as a player or manager – and that includes Paul Gascoigne,” says the 45-year-old. “He was already at Rushden when I went there, but I knew straight away he’d make it.

“He remembered what I’d always told him when his move from Middlesbrough went through. I was over the moon for him. Everyone wants to work in the Premier League.”

He speaks with experience as a player who spent a decade at White Hart Lane after Terry Venables plucked him from the old Fourth Division in 1990, but who regularly doubted whether he would make it back to the League’s basement, let alone top-flight, as a manager.

Twelve years on from cutting his teeth with Billericay, he has climbed four rungs of the ladder via spells at Fisher Athletic, Grays Athletic, Rushden and Newport to work at his current level.

Former Tottenham team-mate Tim Sherwood has chosen a different route, via the White Hart Lane club’s academy to boss the first team and now Aston Villa, while another ‘name’ from Edinburgh’s Spurs days, Teddy Sheringham, is learning about management the hard way at League Two Stevenage.

Edinburgh doesn’t begrudge either, but it does rankle that, o Match of the Day last Sunday, the bookmakers’ four leading candidates to replace Brendan Rodgers as Liverpool manager were all foreign.

“I’m never envious of anyone, whether it be Tim, Garry Monk at Swansea or whoever,” says Edinburgh, who recently completed his UEFA Pro Licence qualification in south Wales alongside the Premier League pair.

“I don’t begrudge those people, because I would have taken that if it was offered.

“What frustrates me more than anything is that young British managers are being overlooked for jobs in most cases.

“A prime example is how well Gary Rowett has done at Birmingham. He learnt his trade at Burton and he’s transformed Birmingham. But there is no mention of managers who have come through the lower leagues.”

As well as experience on matchday, where he’s won promotions, been involved in play-offs and never been relegated or sacked, Edinburgh has had to deal with things most managers won’t ever encounter.

Rogue chairmen; wages being late or not arriving at all; having to stop the Rushden coach en route to a game to tell his squad one of their team-mates, Dale Roberts, had committed suicide; the club itself being expelled from the Conference and then liquidated.

“I’ve been a manager for a long time and been through a lot of emotions, a lot of situations,” says Edinburgh. “I was thinking about Teddy the other day. He is learning on his feet and it’s being magnified because he’s a Football League manager. He isn’t going to be allowed to make mistakes.

“I went in at Ryman Premier level and I was able to learn away from the spotlight. People are still expecting miracles because you were a Premier League player and they’re expecting a Premier League manager, but we know that doesn’t work.

“Ted and I have spoken about players, but he knows that no matter how good you were as a player, you are not a player anymore. You are a manager, so you are judged as a manager.

“At three o’clock on a Saturday, the people at Billericay weren’t interested in what I’d done as a player. In the bar afterwards they would be. All the boys would love to hear the stories about cup finals and who were the best players.

“But they didn’t want me preaching about ‘When I played I did this, so you’ve got to do that’. It’s irrelevant. They say ‘You’re a manager, so you lead us’. You have to deal with it when you’re in the dressing room and you’ve got 16-18 players looking at you. I think Ted is probably learning about that now.

“It’s difficult because football is so scrutinised and magnified now, you can’t make mistakes. I’ve gained a lot of experience and I’ve managed a lot of games.

“When you’re a player you learn more from playing the games than you do on the training ground. And that’s the same as a manager. You are judged on your decisions in changing games, substitutions, team selection. But you have to be given time.”

Edinburgh had taken Newport from near the foot of the Conference in October 2011 to challenging at the top of League Two, as well as two Wembley finals, when he left them last February to take up Paul Scally’s offer to succeed Peter Taylor at Priestfield.

A desire to be back among his family every day in Essex was clearly a motivating factor, but also the chance to manage a club that he believes can help him progress further up the ladder.

He lifted a previously struggling side from 17th to 12th in 17 games last term, and this season has also started well, with the Kent side fourth going into yesterday’s trip to Chesterfield.

“I fulfilled my remit at Newport by taking them into the Football League,” says Edinburgh. “But I had a chance to get home to the south-east with a financially stable club that had actually been in the Championship.

“The chairman is a solid guy. He’s been there 20 years and from my first meeting, I just knew it was the right job and he was a good guy to work for.

“I know all chairmen are good to work for when you’re winning games, but it was an opportunity and I couldn’t turn it down.

“At the minute I think we are overachieving. I had three targets from the chairman. First, to stay in the division. Then he asked ‘Can you get in the play-offs?’ And ‘Can you gain promotion?’

“If we can be in the top eight to ten by Christmas, it’ll be somewhere the club hasn’t been for a long time and that gives you an opportunity to restructure, rethink and maybe add to it.”

Get Gillingham up and his own stock will be even higher for a chance to return to the top-flight he left 15 years ago to join Tony Pulis’ Portsmouth. The big picture in Edinburgh’s head, however, does not only feature himself.

“Doing the Pro Licence was a great experience,” he said. “Tony did a presentation and media people and psychologists came in. They say you’ve got to try and keep an even keel, but it’s impossible.

“Three or four results ago, Garry Monk was being talked about as the next England manager. Then Swansea have a little bad run and it’s like ‘Oh, is he capable?’ It’s crazy, isn’t it?

“You’ve got to enjoy the highs when they are there, because you are not high for long enough, but I do feel there is an oversight and managers are overlooked in Non-League and League Two.

“And it’s usually British managers who get promoted from the Championship, which they say is the hardest promotion, so why do they all of a sudden become not capable of managing in the Premier? It’s not trendy, is it?

“Sean Dyche and Steve Bruce do great jobs. I’m really pleased Paul Clement has come back with his experience of Paris St Germain and Real Madrid and last Saturday I was up against David Dunn at Oldham. They have great knowledge to pass on.

“Of course, you want to be successful yourself. But when you see Gary go in at Birmingham, you are willing him to be successful because you want clubs to say, ‘Yeah, OK, that’s a good model and it works – let’s try it’. It’s so much better for all us young boys who are looking to continue our development.”