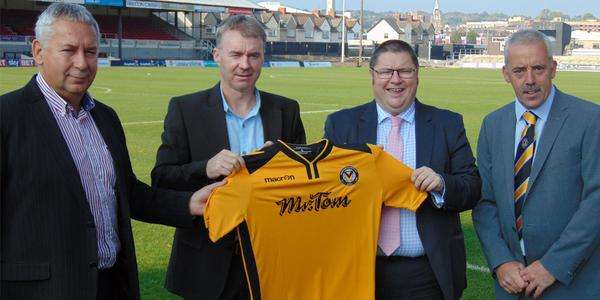 FOUR managers were handed their P45s this week but the door had barely closed on Terry Butcher at Newport County before John Sheridan came through in the other direction.

Just one win from Newport’s opening ten games in League Two left the Welsh club propping up the rest in the Football League and former England defender Terry Butcher was sacked on Thursday.

His exit follows the decision of Fleetwood to dismiss Graham Alexander, while the week began with Steve Evans and Marinus Dijkhuizen leaving Rotherham and Brentford respectively.

But it is Butcher’s replacement who perhaps has landed the toughest gig in a week of change at Rodney Parade.

A takeover bid by the Supporters’ Trust reached its £195,000 target and owner Les Scadding signed over his majority shareholding.

And Sheridan, who celebrated his 51st birthday on Thursday, is up for the fight.

“I think it’s a really good challenge for me and I’m looking forward to it,” said the former Oldham Athletic, Chesterfield and Plymouth Argyle manager.

“It looks precarious at the moment, but there are plenty of games to go.

“Even when I went to Plymouth we were in a similar position and I kept the team in the Football League. It’s massively important we do that and it is going to be a tough ask, but it’s something I’m confident I can do.

“It was a bit of a shock when the call came. It was a nice surprise and it gives me an opportunity to get back into management.”

Evans, dismissed by Rotherham who have just two league wins this season, is among the front-runners for the vacant Fleetwood job.

Alexander guided Fleetwood to promotion to the third tier and their highest-ever league finish last season – as they placed tenth.

But chairman Andy Pilley said he felt compelled to act after the Cod Army won only two of their first ten league matches.

“It is an extremely unpleasant part of being chairman having to make such a decision,” he said. “However ultimately, for a number of reasons, I felt this was in the best interests of the club.”

Brentford’s contentious decision to dispense with Mark Warburton’s services in the close season has not paid off, with his replacement Dijkhuizen dismissed after just eight league matches.

And co-director of football Rasmus Ankersen conceded they made a mistake appointing the Dutchman.

“We really felt it was the right decision, but three months later we just have to put our hands up and say we made a mistake, it wasn’t the right decision,” said Ankersen, who has installed former Everton midfielder Lee Carsley as manager until the end of the season.

“There have been some fundamental processes at the training ground that didn’t work to the level we expected.

“We’ve been trying to improve that over the past few months and it hasn’t improved to the level we wanted it to.”

*This article was originally publishing in the FLP on 4 October.