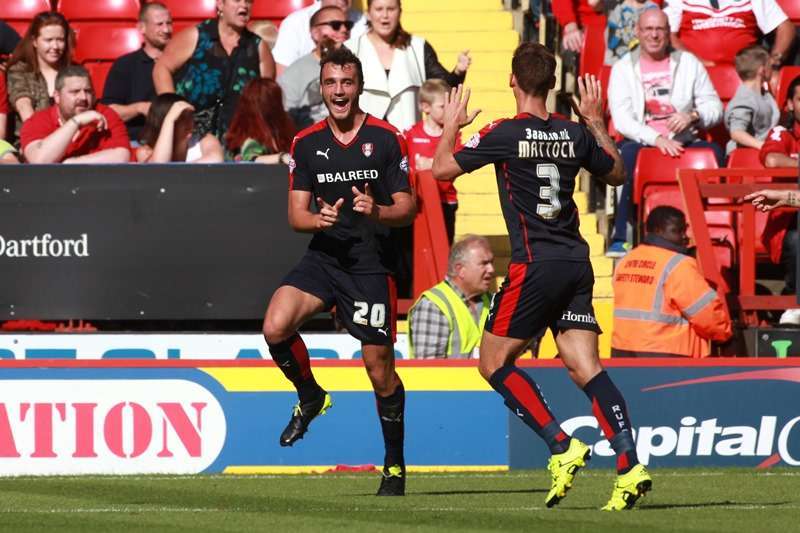 IT’S safe to say that promising defender Farrend Rawson isn’t going to forget 2015 in a hurry.

The 19-year-old, nicknamed Faz, has made his Football League debut, netted his first goal, had two loan spells – and been involved in a rumpus over eligibility that could have seen Rotherham relegated!

All in all, it’s been a memorable time for the towering centre-back. Things really started to happen for the Derby County youngster when he went on loan to Steve Evans’ Rotherham in March.

He made four appearances for the Millers in their ultimately successful Championship relegation battle. His debut came in a 2-0 win at Huddersfield, but it was his final appearance that put him in the limelight, for the wrong reasons.

Rawson played in a 1-0 home win against Brighton on Monday, April 6 – but it was later revealed his loan spell had finished two days earlier.  The Millers were deducted three precious points, putting them just above the drop zone, and fined £30,000.

Fortunately, it didn’t come back to haunt the Yorkshire side.

“Paul Raynor (then-Rotherham assistant manager) told me there were complications and it all came out when I was back at Derby,” he said.

“I was supposed to extend my loan and thought I could have got another four or five games in.”

The chance did arise when Rotherham returned for him in the summer, taking him on a six-month loan. A groin injury initially held him back, but he got in the team in mid-September and scored his first League goal in his season-opener, a 1-1 draw at Charlton.

Despite Evans’ exit as manager and the introduction of Neil Redfearn, the Millers have continued to toil. Another relegation battle is well under way, but Rawson has no regrets about returning.

“I’ve had a run of games and it’s a great learning curve,” he said. “We haven’t got the resources of the top teams, but we have a really good group of lads.

“In the second half of the season we will start grinding out results.”

Whether Rawson will still be there to lend a hand remains to be seen. His loan runs out on January 1 and he’s waiting to find out where he stands.

“It’s between the clubs,” he said. “I’m open to the idea of another loan spell at Rotherham and, if it happens, it will probably be to the end of the season.”

The ultimate goal for Rawson is to establish himself at his parent club, who are operating at the other end of the Championship. The 6ft 4in defender has been with the Rams since U13s and has a strong bond with them.

“It’s always been my ambition to put on the Rams shirt and make my debut,” said Rawson. “It might not be far away or it could be one year away.”

The Nottingham-born player is also getting used to working with different managers.“Steve (Evans) is a bit old school. I can only speak highly of him. Neil (Redfearn) is more relaxed, more tactical and he’s got a great reputation for working with young players.”