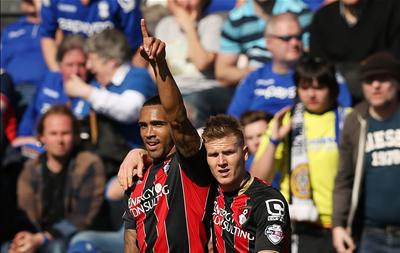 AFC Bournemouth forward Callum Wilson was pleased to score from open play for the first time in eleven matches in Monday’s 4-2 comeback win against Birmingham City.

Wilson had scored one penalty in that time in a fixture against bottom-side Blackpool and revealed how doubts meddled with his confidence; confidence that has now seen him hit the 20-goal milestone this season.

“My job is to be scoring goals and if you are not really doing that you do question yourself.

“I was relaxed, I knew it would come eventually and I should have had one or two more,” said Wilson having gone 991 minutes without a goal from open play.

The striker remains fairly young at 23 years-old and has brought the club to the cusp of promotion to English football’s top flight, hoping he can now return to form at the right time to swat away any usurpers seeking to win automatic promotion.

“We’re in control, it’s in our hands and we have to concentrate on what we are doing and you don’t tend to focus on anyone else. If they slip up, they slip up.”

“I had 19 before I got my one on Monday so I was quite satisfied knowing I still had quite a few games to go to get a few more goals,” said the former Coventry City poacher.

Bournemouth have been in prolific scoring form all season, netting 27 more goals than promotion rivals Middlesbrough, and Wilson believes the club have maintained 1st position due to every team player pulling their weight.

“It shows we are not reliant on one player scoring goals,” he said. “I had a bit of a dip in form, didn’t score from open play for a while, but we were still winning games and were on such a good run.

“Everyone has contributed and that has been a key factor to our success, as long as that continues it does not matter who scores as long as we are picking up the points.”