AGONY is a familiar feeling to every football fan – and I’m going to experience it all over again.

Last year, along with my good friend Russ Green, we walked ten marathons in ten days. Starting out at Hartlepool United, we walked all the way to Wembley, via plenty of wonderful football clubs.

Overall, we raised £420,000 for Prostate Cancer UK. Something to be very proud of. But time is a great healer and you soon forget the misery and the pain. You remember the good bits. The satisfaction of having achieved it and, hopefully, raising the profile of a disease that one man dies from every hour, as well as a significant amount of money.

Raising a few quid is a bonus, but the main aim is to keep prostate cancer in the news. Keeping people aware of what to look for and who might be vulnerable. It’s one of the easiest forms of cancer to treat, but only if you catch it early. If you have any worries, speak to your doctor or call the specialist nurses at Prostate Cancer UK.

We met so many great people last year. Most days we’d have 60 or 70 people walking with us. Virtually everyone had a story to tell. About the people who had survived, those who were living it and, to be honest, those who were dying from it.

It’s the stories that keep you going. What are a few achy muscles compared to what these guys have gone through or are going through?

So, I was pretty easily persuaded to take on another challenge. We came up with a few ideas, but in the end we decided this was the one most people could get involved with.

The big difference is the length. This time, my March for Men is 15 marathons in 15 days. It’s 400 miles from point to point.

Starting out at Exeter City’s St James Park home on June 2, the route will take us to more than 40 clubs as we go through Bristol, up towards Stoke, on to the north-west before cutting across the country and eventually crossing the finishing line at Newcastle United’s St James’ Park.

The welcome we had from all the clubs last year was absolutely brilliant. From the very first stop at Marske United onwards, they all provided physiotherapy at the end of the day. That was fantastic.

Ray Wilkins actually suggested I’d need that and he played a big part in arranging it. I didn’t realise how valuable a massage and getting the muscles patched up would be. It gives you a fighting chance of getting up and walking again the next day.

Days one, two and three last year were hard. You think ‘I’m never going to do this’. Too painful, too far and too many hours on your feet.

But around day five or six, I had a turning point. All the people I’d spoken to about the challenge beforehand, like Ian Botham, said the body would adapt. Mine did around day six. It didn’t make it easy, but it was much more comfortable.

So experience will help – I think! It’s basic things like footwear. I had a cunning plan last year. The idea was to wear walking boots for two-thirds of the day and then change into my trainers. On the first day, I took the walking boots off and tried to put on my trainers, but of course my feet were so swollen there was no way they would go in.

I had to send for a battered old pair I had at home. This year, I’m going to skip the boots and take a few pairs of really old, comfortable trainers.

And I’m sure if my feet get really bad, when we’re on the north-west coast near Blackpool and Fleetwood, I can splodge them in the sea.

I also found the way to cope with the hours was talking to people for as long as humanly possible. Russ preferred to keep his head down and get to the end as quickly as possible. People cope in different ways.

I’ll be doing the same again, though I wonder how many of the lads from the Soccer Saturday panel will come along.

I hope they will, but they’re all making excuses about having already booked their summer holiday. They’ll have to rebook them.

We’re visiting some rugby league grounds this year as well and Ray Wilkins has already said he’ll walk some of it.

The Yeovil Town manager, Darren Way, watched the Sky Sports documentary of last year’s walk over Christmas. He texted me the next day to say how amazing it was.

So I sent him a message back: ‘We’re down your way next year mate, so no excuses’. He’s right up for it.

I’m sure I’ll enjoy it as much as last year. It was fantastic, but being brutally honest, I’m looking forward to getting over the line at St James’ Park. It’s a great place to finish, wonderful football club, fantastic ground and a city with a huge passion for football and life.

Before the end last year, we had to complete a big loop to make sure we’d reached the mile quota. We could see Wembley right there. We could touch it, but we couldn’t hold it. It was absolute agony. I’m hoping for a much more direct route to St James’ Park this time.

The other difference to this year’s route was helpfully pointed out by Paul Merson: “Exeter to Newcastle, are you mad? It’s uphill!” 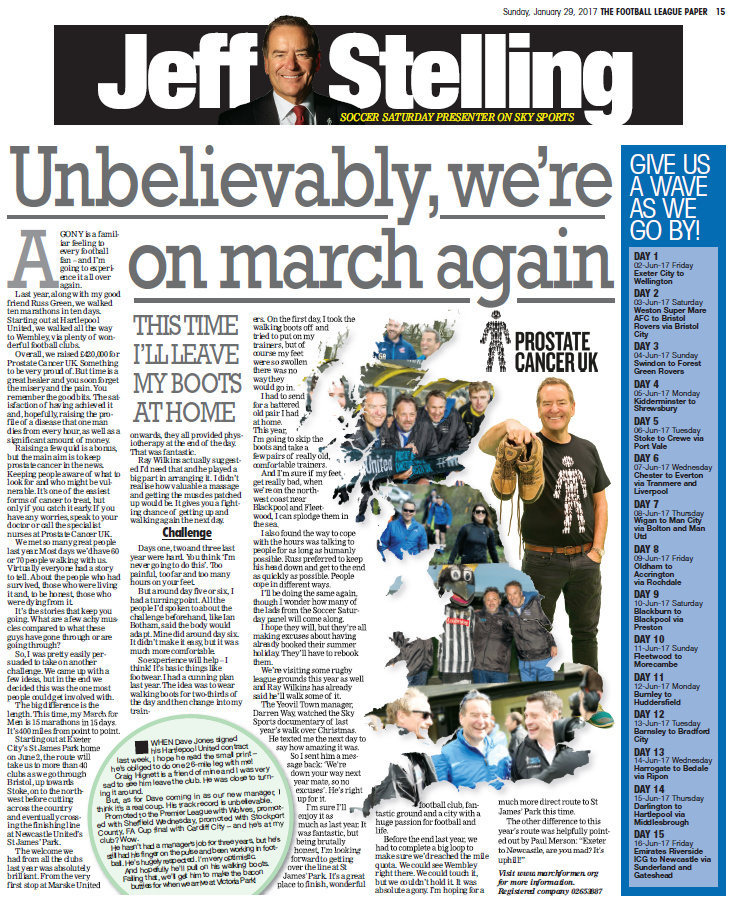