Marcus Bean column: 46-year-old Baz is loving all the fuzz

Posted on February 11, 2016 by Adam Ellis in Columnists, Features | 0 Comments 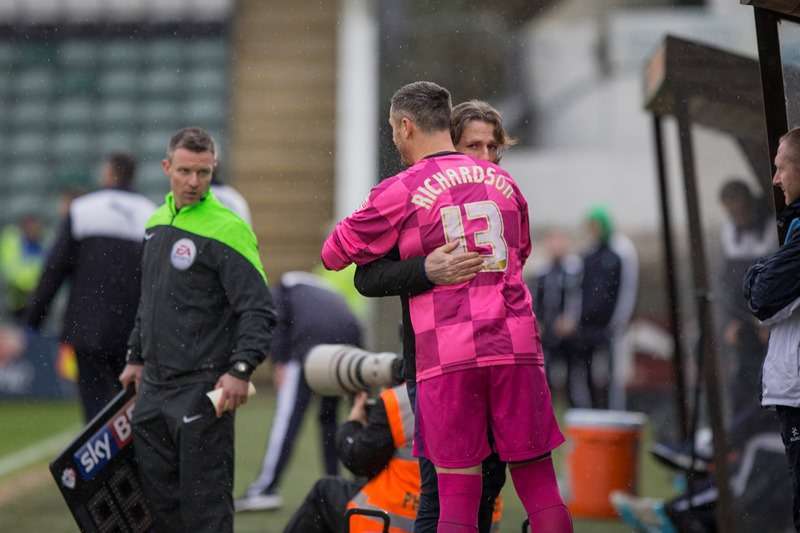 I’ve got to admit I feared the worst when goalkeeper Alexander Lynch was stretchered off last weekend.  We were away at a Plymouth side sitting second in the table, with a hostile crowd baying for blood after we beat them in the play-off semi-final last season.

Enter Barry Richardson, our 46-year-old goalkeeping coach. What a hero!

I was safe in the knowledge that the back four would be well organised. Baz is not afraid to speak his mind and use an expletive or two, as many a fourth official could testify!

I had visions of Baz just a few weeks back being wheeled into the treatment room on an office chair, unable to walk because he’d been hit by – wait for it – a stray ball. A tell-tale sign of old age maybe?

In my head, I was already trying to work out who would go in goal if he got injured. Baz joins in training occasionally and puts a few of the boys (who will remain nameless) to shame with his physique. However, 75 minutes of league football is a different kettle of fish!

If called into action to pull off a Gordon Banks-esque save, there might be trouble, which is something the gaffer alluded to at half-time, calling on the team to protect him and make it an easy afternoon. “No offence, Baz,” he said.

The boys duly obliged and rose to the challenge. The back four were outstanding, restricting Plymouth to half-chances and long distance efforts, which Baz dealt with comfortably. There was just one heart-in-mouth moment when he gathered a Graham Carey free-kick at the second time of asking. His distribution was first-class, kicking against the wind at a blustery Home Park with great accuracy and distance.

When the final whistle blew, I went straight over to congratulate him on his clean sheet. It wasn’t until I got into the dressing room that I learned it had been ten years since his last appearance – and the enormity of it all sank in. He’s loving the attention, and why not? It’s some achievement and it must seem pretty surreal. No offence, Baz, but I hope that’s one record you won’t be beating any time soon!