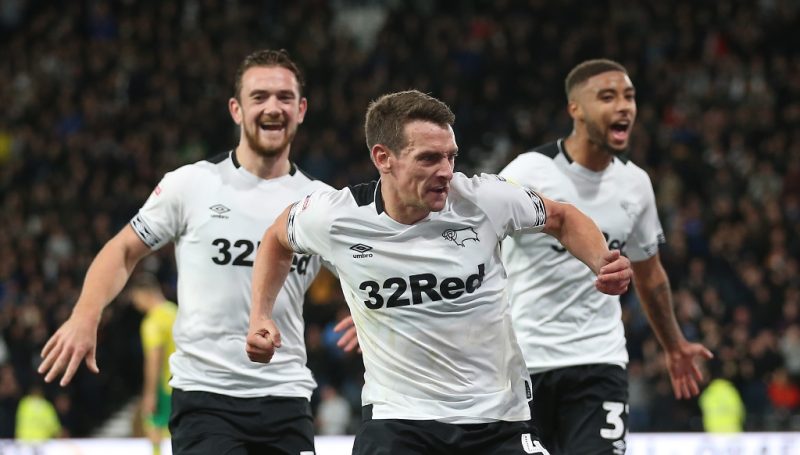 CRAIG Bryson was no slouch as a goalscoring midfielder. Just look at his stats fromthe 2013-14 campaign.

Sixteen goals in 49 games. Derby’s player of the year award. A place in the PFA Championship team of the season.

So does the 32-year-old Scot ever impart his wisdom to Mason Mount, the talented young Chelsea loanee tipped to be England’s next midfield great?

“Normally I would,” laughs Bryson. “But when your gaffer is Frank Lampard… well, you kind of leave the tips to him, don’t you?”

With 274 career goals, 106 England caps and every major club honour against his name, you probably do.

“As a young player, I grew up watching the gaffer and Steven Gerrard,” adds Bryson, who started his career at Clyde and Kilmarnock before joining the Rams in 2011.

“The way they played that position was unbelievable and, even now, having him as my manager is a bit surreal. He’s someone you’re used to watching on TV, not seeing in the flesh.

“To be honest, it doesn’t matter if you’re in your 30s like me and Tom Huddlestone or 19 like Mason. If you can’t learn from Frank Lampard, you’re doing something wrong. We’re all very lucky to get this experience.”

Feware luckier than Bryson, for whom the arrival of Lampard this summer was bothdream and salvation.

Ostracised and loaned to Cardiff by Gary Rowett at the start of last season, it appeared Bryson’s six-year stay at Pride Park was drawing to a close.

Yet what began as a reluctant posting ended in joyous triumph as Neil Warnock’s Bluebirds won a fairytale promotion to the Premier League.

“I didn’t want to leave Derby,” admits Bryson. “But the old manager had made itvery clear that my first team games would be limited.

“What can you do? I could only try to turn a negative into a positive and obviously it went better than I could ever have expected.

“I enjoyed every second of it and Neil Warnock is one of the best managers I’ve ever worked under. The way he treats people, his man-management of the whole squad. If you respect him and put a shift in, he’ll bend over backwards to look after you.

“People talk about his style of football but there’s no right or wrong way to play. Neil knows what his players are good at and what they aren’t, and he plays to their strengths. You just have to look at his record to see it works.

“We knew we weren’t the most talented team in the league. Everybody kept talking about how good Fulham were and how they’d hunt us down. But every single player bought into what Neil wanted. When you’ve got that ethos, you’ll always have a chance.”

Briefly, Bryson looked set to join Cardiff in the top flight. Reports in early July claimed Derby had accepted a £1.75m offer from the Bluebirds.

But the midfielder always hankered after a return to Pride Park and even attended last season’s East Midlands derby against Nottingham Forest as a supporter. Fortunately, Lampard shared those sentiments.

“I don’t know how close it came,” says Bryson. “But I must admit, I was never 100 per cent keen to leave Derby, even for the Premier League.

“And fair play to the manager. On his first day in the job he called me personally and said he wanted me to stay. It was pretty surreal seeing his name appear on my phone, let me tell you!

“Oncehe’d spoken to me, I was never going to push for a move. I’ve always loved ithere and I’d never imagined myself playing for any other club in England.”

Bryson freely admits that part of him wished last year’s promotion had come in a Derby shirt after enduring a succession of late collapses and near misses in recent years.

Scarred Rams fans live in perpetual fear of the traditional February capitulation. But with Derby sitting fourth ahead of the weekend’s fixtures, Bryson insists this season can be different.

“Whenever we lose a game in January or February, that always gets mentioned,” he says with an exasperated sigh. “Everybody’s kind of going ‘Is this when the collapse will start?’.

“But we’ve got so many new players this season, it’s a completely different group. With the new manager, all the young players – I can’t see it being a factor.

“And what we’ve done really well this season is every time we’ve had a bad run, we’ve bounced back from it really quickly. That has to be a good sign.”

Much of that optimism revolves around the emergence of Mount and fellow starlet Harry Wilson, 21, who has scored a string of spectacular strikes on loan from Liverpool.

“I’d never really heard of Mason before he came,” admits Bryson. “He’d been out on loan in Holland, but I didn’t know how he’d done.

“You could see from the first couple of training sessions that he had tremendous ability. He just needs to express that in games and in Derby I think he’s got a great platform. He’s playing every game. He’s got a manager who believes in him. Supporters who recognise he’s young and will make mistakes. It’s the same with Harry.

“Assenior pros, our job is to guide them along. It’s not so long ago that me andTom were in their shoes. We had to lean on experienced players and it now fallson our shoulders to do the same.”