Home / Featured / In McCann, Hurst and Robinson, the League One summit has a youthful look about it

In McCann, Hurst and Robinson, the League One summit has a youthful look about it 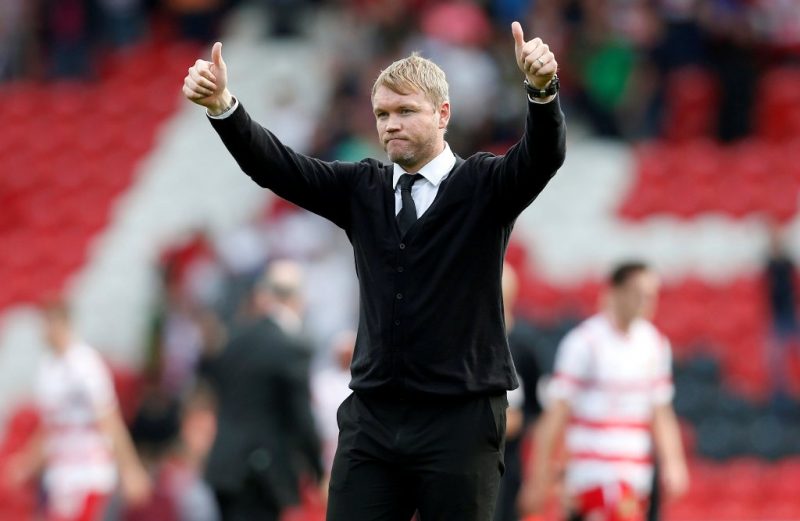 For many years the Football League landscape has been dominated by old-school managers, the hard-nosed ‘gaffers’ who never fail to motivate their players and ensure they approach every game as if it was their last.

You’ve got your Ian Holloway’s, your Neil Warnock’s, your Gary Johnson’s. These are the old guard – all still hanging in there very admirably I must say – a familiar type of manager for those who have been watching the game for more than just the last decade.

But while the top of the Championship, featuring Warnock’s Cardiff City and Mick McCarthy’s Ipswich Town, shows that there is life in the old dog yet, the League One summit has a rather more youthful look about it.

Joint top of the table, on 13 points from five games, sit Peterborough United and Shrewsbury Town. These two sides are under the leadership of managers with a combined age just 11 years older than Warnock himself. Posh boss Grant McCann, a former midfielder for the club, is scarcely older than his playing staff at 37 – and took the field alongside some of them just a few years ago.

Shrews manager Paul Hurst is slightly older at 42, and a non-league success story having risen through the ranks alongside co-manager Rob Scott in one of those arrangements that seem only to occur outside the Football League.

Just below those two teams in the table lie Karl Robinson’s Charlton Athletic. Robinson, like Charlton itself, is a more familiar face to passing viewers of the leagues below the Premiership. The long-time MK Dons boss has carved out a career for himself seemingly from nowhere – and he’s still only 36.

The physicality and relentlessness that is associated with the Football League is often reflected in its managers. It’s thought that you need a gaffer of experience, someone who has been there and done it. That’s one of the reasons why men like Paul Cook populate the divisions, and why an appointment like the one MK Dons made when they installed Robinson as a 29-year-old first-time manager in 2010 is leered at with the wild curiosity you see when young children visit the zoo for the first time.

You can almost see the chairmen across the land, coughing up their morning coffee and exclaiming: “Are they mad? Surely you can’t trust your team to someone younger than their players?”

But the appointment wasn’t mad. Robinson lead the Dons to the second tier of English football for the first time in their history, and masterminded the club’s greatest ever victory – a 4-0 League Cup win over Manchester United in 2014.

This success, amongst other variables, resulted in a changing of the tide. A manager is no longer ruled out of a job because he’s too young, and chairmen are willing to risk it all on first-time bosses with potential. McCann is a walking embodiment of this.

The Northern Irishman was appointed in March last year, succeeding Graham Westley. The appointment itself demonstrated the change in thinking of Posh chairman Darragh MacAnthony, who had passed up McCann for Westley after the former had been in caretaker charge in September 2015.

Hurst is another example of this, young as he still is in managerial terms. He was 41 when he was handed the reins at New Meadow last year, selected from a field of over 100 candidates. He kept Salop in the division last season, and has followed that up with this strong start to his first full season in charge.

This is by no means to say that there should be a culling of all managers over 50… There is plenty of room for each and every size, shape and age of manager in the Football League.

But it’s exciting to see young managers being given the confidence of their clubs, and in the cases of McCann, Hurst and Robinson to name just a few, rewarding them spectacularly.