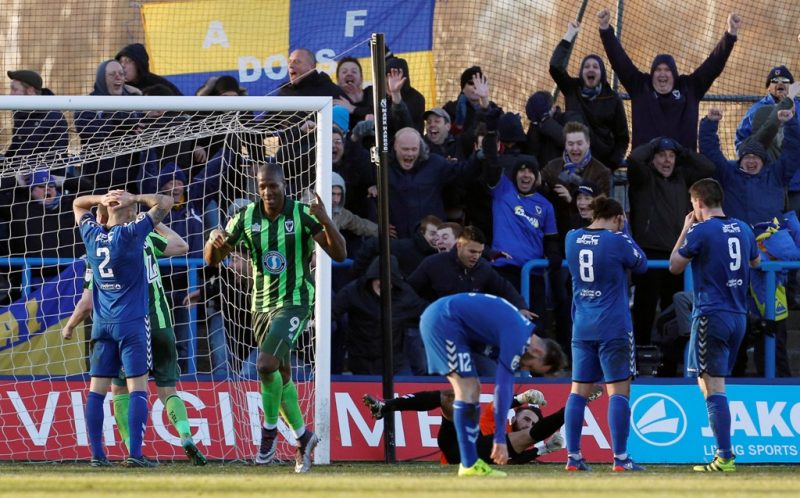 AFC Wimbledon captain Barry Fuller has praised the club’s strikers after they helped the League One side come from 3-0 down to beat Curzon Ashton 4-3 in the FA Cup on Sunday.

After an Adam Morgan hat-trick put the Nash 3-0 up after an hour, it looked like the National League North side were, amazingly, breezing into the third round of the cup against play-off hunting Wimbledon.

However, a stunning flurry of four goals in the final 14 minutes, culminating in Tom Elliott’s 94th minute winner, meant the Dons sealed a thrilling comeback win and their place in the third-round draw.

Elliott scored two, while Dom Poleon and Tyrone Barnett both notched one each, and it is that attacking firepower that Fuller is so encouraged by.

In an interview with the club’s official website, he said: “The front four boys really showed what they were about in the last 15 minutes.

“It just shows the squad depth we’ve got here and the firepower up front. Those four up front are causing a lot of teams problems.

“It was one of the craziest games I’ve ever been involved in.

“From our perspective, it was not a pretty game and we were not at our best, but to be 3-0 down with 15 minutes to go and win 4-3 shows the character and belief in the squad.”

For long spells, the Dons struggled against their non-league counterparts, who defied their league form to put up an extremely stern test that came close to causing a huge upset.

Curzon Ashton are only four points above the relegation zone in the National League North, but Fuller said: “The manager had watched DVD’s of them and he told us that they were a really good footballing side.

“They only sign technical players and we knew they would pass the ball.

“They were probably better than us at that on the day and it must hurt them.”

Wimbledon’s reward for their last-gasp win on Sunday is another potential banana skin, as they will travel to take on Sutton United at the start of January.