Moore column: Big Mick coup would be a risky move for Ipswich 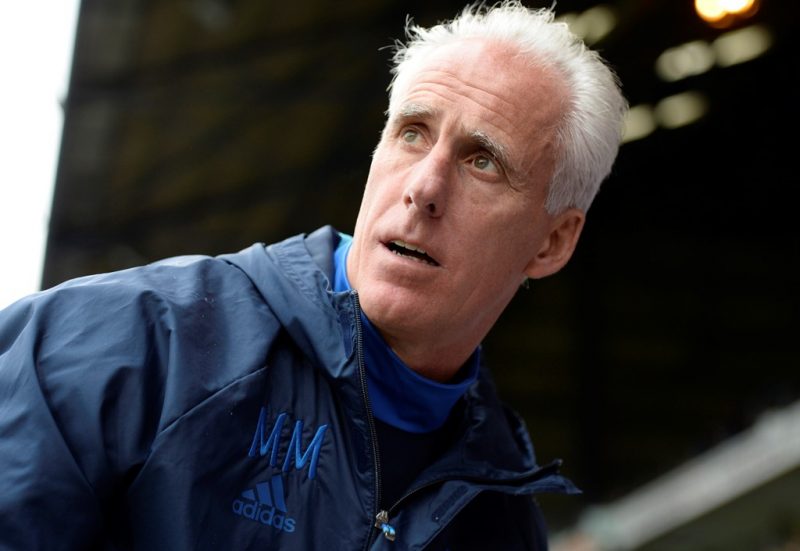 Safe hands: Mick McCarthy has steadied the ship at Ipswich but a growing number of fans yearn for a better style of football (Photo: Reuters / Adam Holt)

Be careful what you wish for. It is a phrase regularly levelled at those Arsenal fans who have tired of Arsene Wenger, and elsewhere when a club appears to be treading water under a long-term manager. The spectre of Charlton Athletic’s post-Curbishley slump is often invoked. Beware the urge to go to ‘the next level’. It might be the level below.

The likes of Leyton Orient, Notts County and Blackburn Rovers offer powerful support to the theory that there is sanity in stability. Yet Everton survived David Moyes’ departure, as have Stoke the exit of Tony Pulis. Watford and Chelsea thresh managers like combine harvesters yet prosper. Every case is different.

Ipswich Town fans were the latest to be told to ‘be careful what you wish for’, by player-pundit Clinton Morrison, once a Republic of Ireland international under McCarthy. In response, many fans said they appreciated McCarthy’s efforts when Ipswich looked destined for relegation in 2012-13, but have tired of the football they are watching.

Portman Road season tickets are among the most expensive in the Championship, and six goals in the nine home games prior to yesterday’s visit by QPR inevitably had fans questioning value for money. It is not just the goals, but the style, too. McCarthy is a pragmatist, rather than a purist, and many Town die-hards believe his philosophy is at odds with the passing traditions of Bobby Robson, John Lyall and George Burley.

But there are no points for artistic merit. McCarthy is the longest-serving manager in the Championship for a reason. The fact that he’s the only one to survive four years is an incredible statistic. Since he arrived, in early November 2012, Leeds have used eight managers, Blackburn seven, Derby six (including Steve McClaren twice), Nottingham Forest six, his old club Wolves five. Charlton and Blackpool were in the Championship that season. They are now in Leagues One and Two respectively, with Charlton appointing their eighth manager since November 2012 and Blackpool on their seventh. Neil Warnock, whose boots McCarthy used to clean as a Barnsley apprentice, was manager of Leeds back then. He is now manager of Cardiff. In between he has managed Crystal Palace and Rotherham, had a caretaker spell at QPR, and some time off in Cornwall. All the while, McCarthy has ground out results at Ipswich despite tough fiscal restraints.

In his four years, McCarthy has raised around £16m, primarily through the sales of Tyrone Mings, Aaron Cresswell and Daryl Murphy. He has been allowed to reinvest about ten per cent of that on transfers.

When he was appointed, Ipswich were bottom with seven points from 13 matches. They recovered to finish 14th and have subsequently come ninth, sixth and seventh. Even if the arrival of free transfers such as Christophe Berra and loanees like Jonny Williams suggest a respectable wage budget, that is consistent over-achievement in an extremely competitive division.

This season, Ipswich have been mostly mid-table, recently dipping to lower-mid-table. Murphy’s departure has left a void that, with David McGoldrick and Brett Pitman hit by injuries, has been difficult to fill. Going into Saturday’s match, Grant Ward was top scorer with four goals, three of which came in the misleading opening day 4-2 win over Barnsley. McGoldrick is now back and McCarthy will hope he can inspire a push up the table.

Given McCarthy’s record, it would be a surprise if Marcus Evans took the risk of firing him during the season. The Yorkshireman could be vulnerable, however, if season-ticket renewals indicate supporter discontent has become a revolt. This season, gates have averaged 17,162 ahead of yesterday’s game, 1,800 down on last season but on a par with McCarthy’s first full campaign. But the discontent is becoming more audible.

It seems a long time since I watched the Tractor Boys take on Internazionale in the San Siro, while the Wembley afternoon Roger Osbourne stooped to conquer Arsenal is ancient history. Memories of those days account, in part, for current dissatisfaction, but past glories are no defence against relegation.

It is doubtful any other manager would be capable of restoring Ipswich Town’s top-flight status on the current budget, but they may be prepared to risk more expansive football. However, the key word is not ‘expansive’, but ‘risk’.

*This article originally featured in The FLP on 27 November 2016. 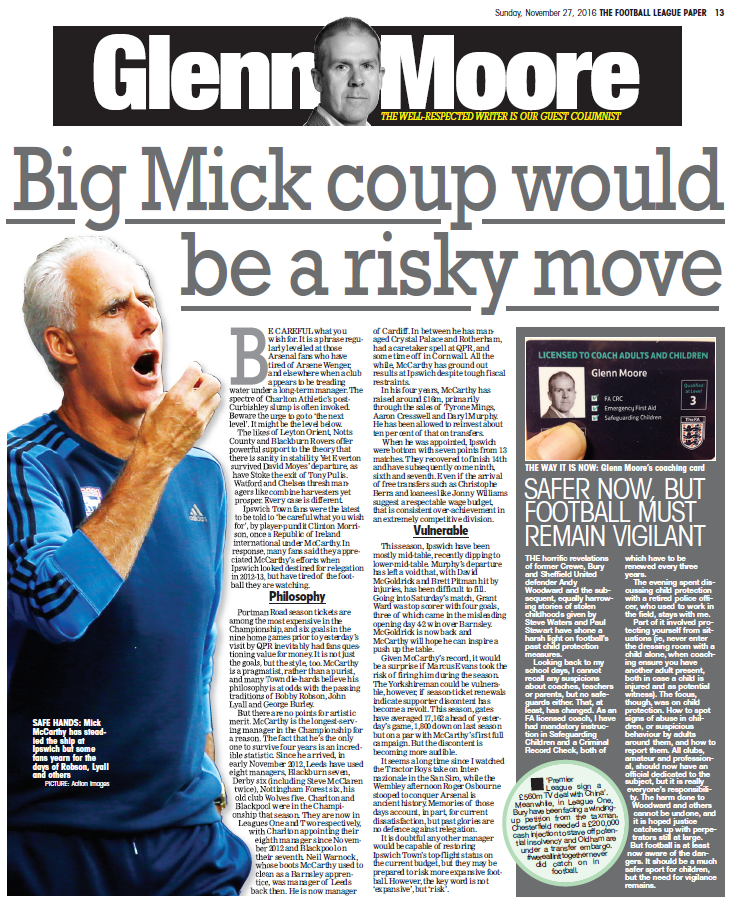