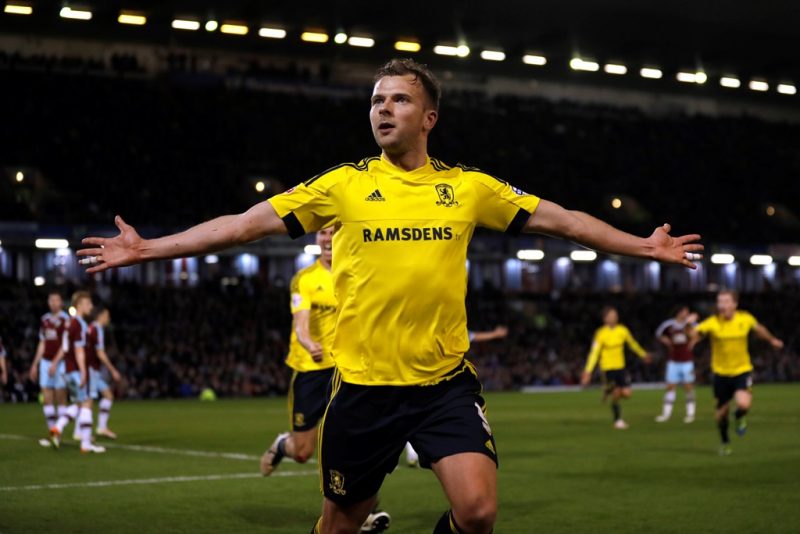 JUST before the international break, a hooded figure was spotted huddled in Hillsborough’s posh seats as Sheffield Wednesday lost 2-1 to Ipswich.

Closer inspection – and a crafty photographer – soon revealed the mystery man to be Jordan Rhodes.

This being three o’clock on a Saturday afternoon, Rhodes’ presence in the stands begged an obvious question: why wasn’t the £12m striker in Manchester, where his Middlesbrough team-mates were taking on Pep Guardiola’s City?

The answer – not for the first time this season – was that the second-most expensive signing in Boro’s history didn’t even make their squad.

Once viewed as the most prolific poacher in the Championship, Rhodes sees less action than a Trappist Monk under Aitor Karanka.

The Scotland international, scorer of 185 goals in 355 career games, has graced a Premier League pitch for 105 minutes this season, and 63 of those came on his solitary start against West Ham.

At 26, his career should be approaching its zenith. In reality, his usefulness these days amounts to five-minute cameos designed to run down the clock. Recently, even those have dwindled.

Conspiracy theories abound over Rhodes’ treatment, chiefly that he was signed by chairman Steve Gibson against the wishes of his manager. The truth, as usual, is more mundane.

Rhodes was signed from Blackburn in January, expressly to get Boro over the line. With six goals in 18 games, that’s exactly what he did.

Yet the suspicion from the outset was that Rhodes is ill-suited to Karanka’s rigidly risk-averse system.

The Spaniard is to the beautiful game what Peter Stringfellow is to feminism. Safety first, stifle opponents, shape over spectacle. An avowed disciple of Jose Mourinho, he’d rather dunk his head in a vat of boiling oil than go all guns blazing.

History proves that Rhodes will score prolifically, but only if he gets chances – and Boro rarely create those. This season’s tally of 77 is fewer than every side except Sunderland and Hull.

In a division full of deadly attackers, Karanka was  never likely to alter his mindset. Rightly or wrongly, the Boro boss sees Rhodes as a six-yard box poacher lacking the speed and strength to play as a lone striker against top-flight defenders. 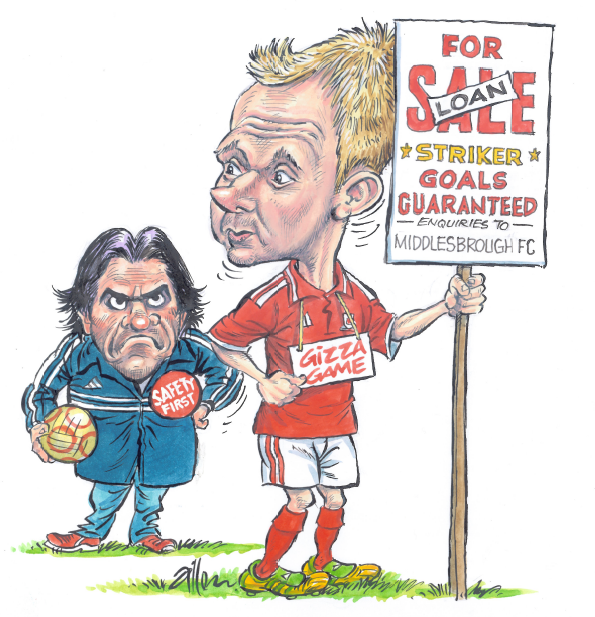 Without a run in the team, it is difficult to concur. Mark Hughes is a prime example of a player who resembled a carthorse on the training ground only to race like a thoroughbred every Saturday.

Sadly, though, Karanka’s entrenched caution means Rhodes is unlikely to get much time to learn on the job. Which means, come January, he will almost certainly be heading out of the Riverside.

Boro are unlikely to sanction a permanent move. Partly because they wouldn’t recoup their outlay but primarily because relegation is a realistic risk. Why flog a proven Championship striker when you could be playing there next season?

That means a loan – and, with the exception of Newcastle, which Championship club wouldn’t take the striker in a heartbeat? There will be an almighty scramble.

Rhodes’ appearance at Hillsborough fuelled the fires, though he could simply have been visiting his dad, Andy, who is goalkeeping coach at Wednesday. Nevertheless, Carlos Carvalhal offered Blackburn £10m for the striker 12 months ago and inquired again when signing Adam Reach from Boro in August.

Norwich and Wolves also asked the question, while Steve Bruce twice attempted to sign Rhodes for Hull. His rejuvenated Villa side have been strongly linked.

Whatever happens, it is critical that Rhodes joins a club who play to his strengths. Two strikers, proper wingers, service, service, service. Accommodate him, feed him and I’d back any side who signs Rhodes in January to be playing in the top flight next season.

Britt’s on fire and it’s time to panic!

FOR several weeks now, the City Ground has been football’s equivalent of Mount Doom – a dismal, oppressive edifice, shrouded in a hope-sapping murk.

And, while last weekend’s 2-0 victory over Ipswich (and Friday’s 5-2 win at Barnsley – Ed) provided a glimmer of sunlight, the dark times are far from over.

The proposed sale of the club to American John Jay Moores is yet to limp over the line. Fawaz Al Hasawi remains in the boardroom and, if that is the case in January, then the Kuwaiti is hardly going to splash the cash.

Manager Philippe Montanier, popular with supporters and showing signs of improving results, would likely be dispatched by a new regime, creating instability and unrest.

Skipper Chris Cohen is injured, a depressingly frequent occurrence that invariably coincides with a dip in form. His three-month absence is a major blow. Most worryingly of all, Britt Assombalonga  – this week dubbed the best striker in the Championship by team-mate Ben Osborn – is back to his best.

Having missed the majority of last season, he has again struggled with injuries, but a classy double against Ipswich took his tally to six for the season. His goals have arrived at a rate of one every 56 minutes, not just the best ratio in the division but in the country.

Stats like that don’t go unnoticed and, while the striker has shown no appetite to leave, Forest’s owners, old or new, would surely be tempted by the kind of money currently changing hands.

EXPERIENCE manifests itself in many ways. In the case of Steve Evans, it was a bit of quick-fire renovation.

On taking over at Mansfield, the Scot immediately demanded the dugouts be shifted front and centre, close to supporters and within barracking range of officials.

Two decades of touchline clashes and pantomime villainy have taught Evans the value of galvanising a crowd. If the men on the pitch can’t lift the volume, a verbal volley or contested decision will, especially if the punters have a front row seat.

Dark arts? Undoubtedly. But, in a sport where small percentages make a big difference, Evans knows a fervent crowd can influence a ref and intimidate opponents. They don’t tell you that on your Pro Licence.