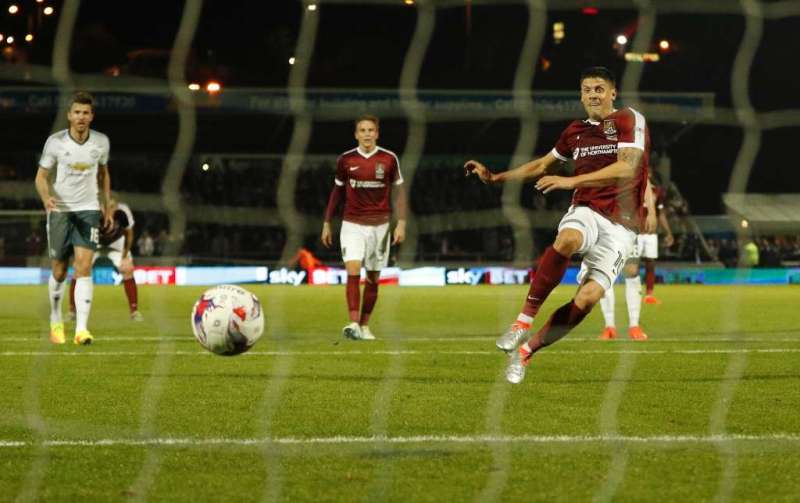 ALEX REVELL has that double feeling again – and last time it ended in a Wembley wonder goal!

The Northampton Town striker is impressed by his new club’s start to life back in League One.

Tuesday’s 3-1 win at Swindon ended a solid September, in which the Cobblers collected four wins from five league games.

Rob Page’s side moved up to fourth ahead of the weekend – and who would have thought that a year ago when the club’s very future was under threat with liquidators hovering.

It’s even more remarkable when you consider manager Chris Wilder quit to take over at boyhood club Sheffield United in the summer.

Revell, 33, is getting the same vibe he felt when he was a Rotherham United player. Northampton hope his sixth sense spells more good times at Sixfields.

He said: “I get such a similar feeling that I had at the Millers after we went up from League Two in 2013.

“We had a great year after we won promotion. We used the momentum we’d picked up to carry us on. It ended brilliantly at Wembley – and, yes, I did enjoy my goal against Leyton Orient in the final!

“It would be brilliant if I could repeat the trick: two back-to-back promotions.

“We’ve already shown we can cut it at this level. We may have lost our long unbeaten run, but we’ve reacted brilliantly with a 4-0 win against Southend and on Tuesday at Swindon. We have every chance.”

On their side is something usually only on offer in the Premier League.

“We’re really lucky,” added Revell, who earned his way into the Football League after his performances at National League Braintree.

“Our training ground is next door to a clinic and we’re allowed to use the hydro chambers from time to time. It really helps with recovery.

“Cryotherapy is a major part of top-level football and we’re so fortunate, even if it’s a bit cold!”

Revell added: “There’s a great feeling around the place at the moment.”

*This article originally featured in The FLP on Sunday, October 2nd.