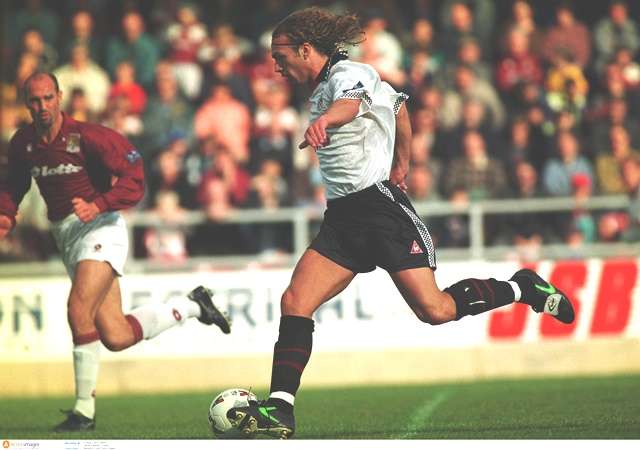 AT 22, Darren Freeman was plodding round the part-time circuit with the likes of Lewes, Horsham and Worthing.

Finished by injuries before he’d even turned 28, the former Gillingham, Fulham, Brentford and Brighton forward wasn’t around for a long time.

But he certainly had a good time – even if it did involve being stood up by his Fulham manager Micky Adams and skinned by David Ginola! Now 42 and manager of Ryman Premier side Lewes, Freeman has plenty of tales to tell.

My first professional club was Gillingham under Neil Smillie and Mike Flanagan. I’d been playing Non-League football for Horsham and they must have scouted me. I went up on trial and they signed me, which was a dream come true.

I was 22 by then. I’d been on trial at Brighton as a young lad but it was one of those where I wanted to be a footballer and wouldn’t take no for an answer.

I’ve always had the attitude that if people say no, I try twice as hard to prove them wrong. I believed in myself, my father believed in me and told me to keep going. I never doubted it would happen, though you need a bit of luck as well.

Tony Pulis at Gillingham made a big impression. He taught me a lot. You knew your roles and responsibilities, you learned good habits. He was a very hard man, a tough taskmaster who would drill things into you again and again, every single day.

But the man who got the best out of me was Micky Adams, who took me everywhere. Micky’s great strength was that he’d always get the best out of whatever he had. However bad the hand, he’d find a way to play it. That’s the mark of a good man-manager and, in that sense, I think he had the edge over Tony.

Bobby Zamora. I played with him when he was a young lad at Brighton. I always knew – as did anyone who watched him – that he had something special about him. 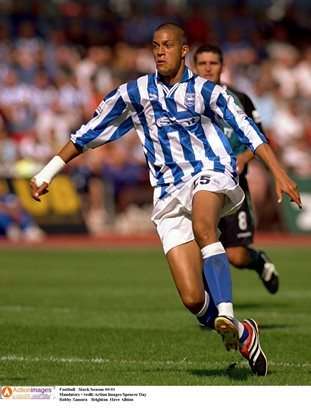 You watched him in training and everything was effortless. He had natural ability, he had strength, he had pace – and that was in his early twenties. You just knew that once he matured he’d be a phenomenal talent.

Don’t get me wrong – he put the graft in. But it was so easy for him at that level, he could have played at half pace and still got 20-a-season. He was head and shoulders above everyone else.

I’ve been very lucky in that respect. I’ve actually been promoted with every single professional team I played for – Gillingham, Brighton, Fulham and Brentford. That’s something I’m very proud of and I think it’s probably why managers liked having me around.

Gillingham was the first, in 1995-96. We were runners-up, but we absolutely smashed it that season. We had Tony in charge, Leo Fortune-West up top.

And that was the year Jim Stannard, our keeper, broke the record for the lowest number of goals ever conceded in a 46-game season with 20. We were incredibly solid but we also had good individuals.

Simon Morgan at Fulham. He was the funniest player I ever knew – and the most miserable at the same time!

He’d moan about anything and everything. If he hadn’t been a footballer, we always said he’d have made a great Victor Meldrew impersonator.

But he was also a great captain and a great character with quite a dry sense of humour.

He used to make me laugh a lot and he used to get the best out of everyone he played with, especially the younger lads coming through.

I remember one year I was playing for Fulham. I picked the ball up, ran straight across the pitch, then started taking people on, dribbling towards my own goal.

I remember looking up and seeing Micky Adams and Alan Cork jumping up and down, swinging their arms, shouting ‘We’re kicking that f***ing way!’ Everyone laughed at that. 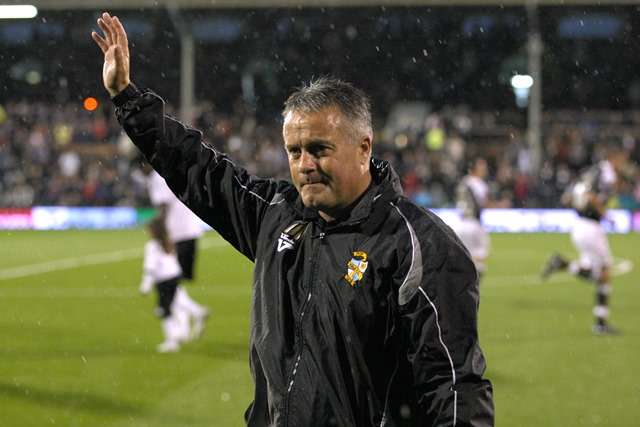 But the best was probably during a pre-season tour of Ireland during my first summer with Fulham.

I scored a hat-trick and Micky said, in front of the whole dressing room, ‘Well done, Darren, you can have tomorrow off. These lads will be training but you and me are going on a fly fishing trip’.

He told me to get up at five in the morning and he’d pick me up outside the hotel.

I should have known then it was a wind-up but I was pretty naive then so I set my alarm, had my breakfast and stood there waiting. Obviously the gaffer never came.

When I got back the lads were crying with laughter – they couldn’t believe I really thought I’d get a day off. It took a long time to live that one down.

I’ve won a lot of promotions and I’m proud of them all. I also scored a hat-trick on my debut for Brighton which will always have a special place in my heart. But for something totally unique, I’d probably say scoring the first goal of the new millennium.

It was January 2, 2000 and I scored after two minutes against Exeter. Whatever happens, it’s a record that can never be taken away.

Being told my playing days were over. I’d had many knee operations over the years, and a lot of groin problems.

By that point, I’d had three strangulated hernias, so I was already in a pretty bad way, then I pulled all the muscles and ligaments off my groin.

I went to see a specialist and he said to me ‘Look, you could play on. But if you do, you could easily end up in a wheelchair’.

Football is your identity and, when it’s taken away, you forget who you are. It was all I’d ever wanted and all I could really do. I’d been playing well at the time as well, so it was a huge blow to have come to a sudden stop like that.  I was in a very bad place, but I had my family and my friends around me and you soon realise there are people far worse off than you.

Hartlepool on a Tuesday night. It was always freezing, it was always windy. And no matter who I was playing for, it was miles and miles away. I hated it.

Sol Campbell, who I played against in the late nineties when he was still at Spurs. He was enormously strong and powerful.

I did actually score that day but he still left an impression.

Mainly it was his size, but he was also good on the ball and a very intelligent defender. He was also quicker than people realised, especially given that it took you a week to get round him!

White Hart Lane – even though I never won there. I’m from Brighton, but I grew up a Tottenham fan. Glenn Hoddle was my hero and it sort of stuck from there.  Later, I loved watching David Ginola.

We played them in a few cup games, around 1998 or ’99, and to be on the same pitch as Ginola was an unbelievable experience.

He was incredible, even at that age. I wish I could have watched him at closer quarters, but I never got near him!

Just to enjoy every day I’m in football. I’m managing a great club now in Lewes and it really is an honour to be here. I was at Whitehawk before, who I took to Conference South. We won three divisions in four years, which is a massive achievement.

Hopefully I can bring Lewes similar success and we can get into the Conference. Obviously I’d love an opportunity to manage full-time but I’m still learning the trade and I love getting out there and coaching. That’s my focus now.