Home / Featured / Luciano Becchio Feeling Back At Home In Yorkshire

Luciano Becchio Feeling Back At Home In Yorkshire

Posted on October 16, 2014 by admin in Featured, Skybet Championship | 0 Comments 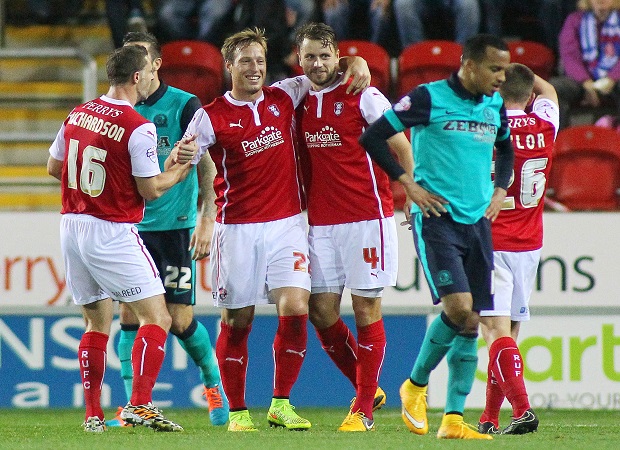 LUCIANO BECCHIO has gone from Boca Juniors youth team through Barcelona to living just round the corner from Barnsley.

And the Argentinean insists he’s fallen in love with Yorkshire after returning to the White Rose county. It’s the place where Becchio earned the adulation of Leeds fans – they still sing his name at Elland Road – and started his family.

And now he’s rediscovered his scoring touch having joined Rotherham after an 18-month barren spell at Norwich.

The loan spell is initially until January, but the 30-year-old Becchio is not thinking about the future yet – he’s just happy to be home and proving it with two goals in his first two home games for the Millers.

“I love it around here,” said Becchio, who spent a year alongside Bojan Krkic and Giovani dos Santos at Barcelona B in 2006.

“I’ve been here for nearly five years and both my daughter and son were born in Leeds.

“It’s a special place for me, the people are very welcoming and a big part of coming to Rotherham was the chance to return with my family.

“I feel really good to get minutes on the pitch with a team that wants to play me. My position at Norwich is that I have one more year on my contract. Leeds was fantastic but now all I’m thinking about is what I can achieve at Rotherham.

“We’ve had good form and are looking to get as many points as possible, and I’m very happy that I can play a part in that. We don’t think that we’ve just been promoted –we just want to achieve as much as we can, and I like that.

“I’m happy to score goals – all strikers live for goals – and it was a great feeling to start scoring again.”

In contrast, East Anglia is unlikely to go down as one of Becchio’s favourite parts of England. Since arriving at Carrow Road on deadline day in January 2013 he has made 16 appearances, only two of them starts, without scoring.

That goal drought affected the whole of Norwich’s much vaunted strikeforce before relegation from the Premier League in the summer.

Becchio rarely needed to worry about finding the net at Leeds with an 86-goal return in five years at the club and he is still puzzled by his lack of chances at Norwich.

“It was disappointing because I didn’t play and I am not sure why,” added Becchio. “I was there for a year and a half and played two games here or there, and I don’t think I ever got my chance.

“But with a new team and a new club you get the chance to start again and I want to show what I can do.”

Steve Evans has the habit of rubbing people up the wrong way but he’s a boss you’d like by your side in a tough spot. The Millers manager, a notoriously straight talker, has told Becchio his fitness is not up to scratch – a fact the striker readily admits.

Becchio said: “I am working hard to get myself back into 100 per cent shape. The manager has supported me since I have arrived and when I’m even fitter I’ll be able to help the team much more.”