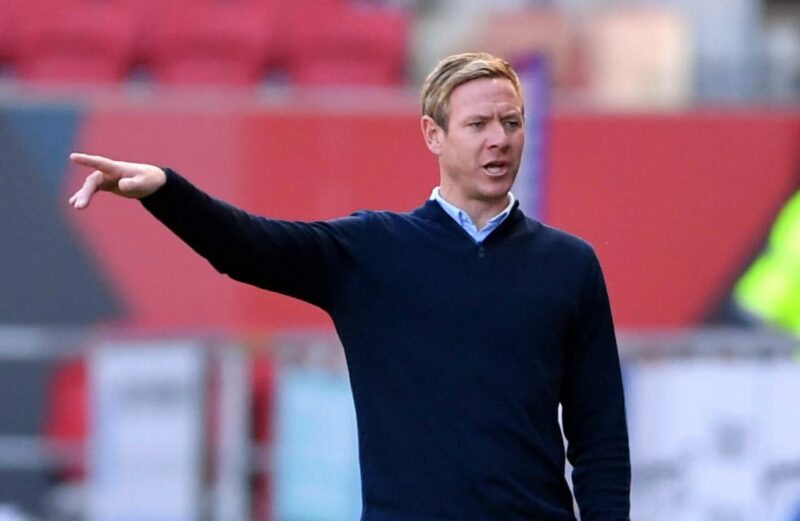 BRISTOL City, the way they are going, will be up there again as this season progresses, at the top of the mountain. But will they slide yet again?

Alton Towers hasn’t seen as many highs and lows as City.

Under manager Gary Johnson they collapsed twice. Under his son, Lee, they have blown promotion from the Championship for the last four seasons.

Now it’s Dean Holden who has to deal with the ghosts of promotions past.

Sports psychologists have been asked to get to the root of the problem and Holden says: “My approach to what has happened is to tell the players to stay in the moment and deal with reality as it is now.

“It’s about dealing with what’s in front of you. It’s the way I live my life and the way I want to be as a manager.

“I want the players to embrace the challenge that’s in front of them. Anything else that’s further down the line, don’t get too carried away.”

Holden, 41, was Lee Johnson’s assistant as that elephant in the room kept growing and growing.

Johnson was appointed as Steve Cotterill’s successor in the February of 2016. Holden joined him nine months later from coaching at Walsall.

Having kept the Robins in the Championship the season after Cotterill had got them promotion, Johnson was looking to bob on.

The 2016-17 season saw Bristol City fifth after 11 games. They collapsed and in the end were fighting to stay in the league, finishing 17th.

The 2018-19 season saw Bristol City on a seven-game winning streak that took them to the last day for a play-off place. But Derby took it instead. City finished eighth.

The 2019-20 season saw Bristol City sixth in February but one win in ten did for them and Johnson. He was sacked and Holden took them to 12th post-Covid-19.

Prior to that Gary Johnson had Bristol City third at Christmas and top by March. A poor run dropped them into the play-offs and having got to the final, they lost to Hull.

Dad followed that by getting to fourth in the February of the 2008-09 season and finished up tenth.

If the Johnson family were on Family Fortunes, they’d have that loud Err-Err buzzer working overtime as the Xs went up.

Currently, City are top of the Championship with four successive wins to their name. Sound familiar?

I’ve seen them twice this season. They won in the Potteries against an obdurate Stoke side who are becoming again what they were under Tony Pulis.

Then last week by the Trent they swept aside Nottingham Forest in the first half and then had to fight for their lives to protect the win when their hosts woke up.

Forest are a good case in point. They are having to cope – and not at all well so far – with the disappointment of last season’s collapse, while Bristol City have a far bigger under-achievement issue to deal with.

“We’ve addressed that with the help of sports psychologists,” explains Holden.

“Mentality is a huge part of the game. It’s just as important as the technical, the physical and the tactical side of the game. You can’t separate one from the other.

“You see that with teams all the time. You see it in every sport, don’t you? Golf, cricket, where all of a sudden a mistake can mess somebody up.

“So the big part is staying in the moment, dealing with what’s in front of you right now.

“That takes a bit of time because we’ve got a young squad, young players in there, they are learning on the job.”

Holden, whose only previous experience as a manager was at Oldham five years ago when he also stepped up after Johnson left, has recruited know-how as well as his youngsters.

Chris Martin, 31 years old and 352 league games, and Chris Brunt, 35 and 434 league games, aren’t tarred by past failures. Martin is crucial to how the Robins want to play. He’s up front and available, laying the ball off and bringing others into the game when City attack.

He made the two goals against Forest and Holden says: “The big man is playing very well, doing exactly what we wanted from him when we brought him into the club.”

Martin and Brunt know just about everything about achieving promotion from the Championship.

Brunt has done it three times with West Brom, the last one just three months ago, and Martin has had enough near misses with Derby not to let Bristol City’s jitters get to him.

“The journey we are on, we want to get to the Premier League,” says Holden.

“We’ve signed Steven Sessegnon, 20, on a season’s loan from Fulham and Martin and Brunt will help him.

“It’s not always about being a John Terry-type, or Bryan Robson, and shout, shout, it’s about the standards they set, the way they train every day.

“Just little messages. You can see Chris Martin helping out Sessegnon, Chris Brunt helping out Tyreeq  Bakinson (21) who has been outstanding this season.

“Alfie Mawson, with his experience of getting promoted to the Championship with Barnsley, helping Taylor Moore (23). Those kind of players are important to any team.”

During the current international break, and before next week’s game at Barnsley, Holden will sit back and take stock of what Bristol City have done so far.

“It gives us the chance, without the pressure of having another game within two days, to see where we are at,” he added. “There is still a lot for us to improve. In every game so far this season that has been the case and we will be having a look at that.

“We have to avoid complacency because we’ve won a few games. Forest was our biggest test so far mentally. We knew the predicament they were in and they would go after the game.

“They did that in the second half. I’m pleased we have come under that because in any successful season you are going to come under pressure and need to stand up together, fight together.

“The spirit you build out of something like that is really important.

“All the managers are ringing me, giving me some advice and, as I say, complacency is the biggest thing. But that gets nailed in the dressing room, by me and the staff.

“The focus is on Barnsley next week, then the next one, then the next one.But, if in-house we are not getting carried away, I hope our supporters are. It’s a tough old world we are living in at the moment, people are having a tough time. So I hope they are enjoying what we are doing.

“I’m told it’s Bristol City’s best start since 1927, but the only sort of achievement I’m interested in is where we are at the end of the season.”