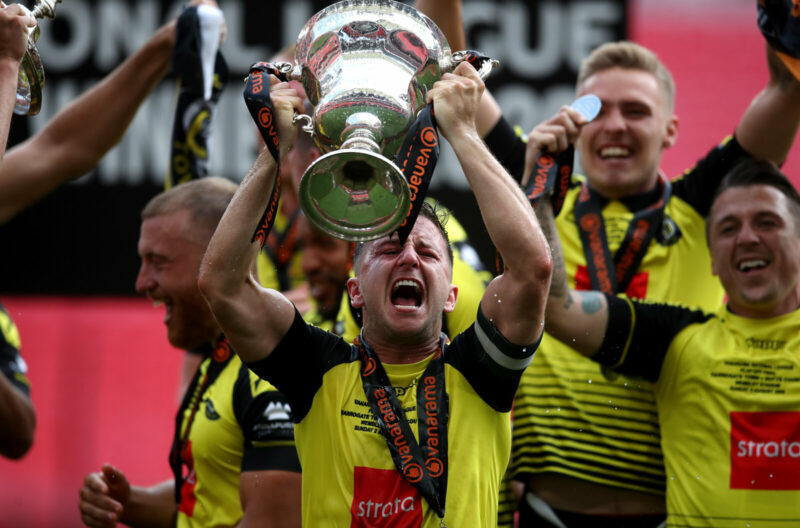 The rooms of Harrogate will welcome the likes of Bolton Wanderers and Bradford City next season.

Simon Weaver’s side created club history with a brilliant team performance to win the National League promotion final and seal a place in the Football League for the first time in their 106-year history.

Weaver called in a favour from England boss Gareth Southgate in the build-up to the play-offs with a surprise team talk at a local hotel.

And it was display the Three Lions boss would have been over the moon with had his internationals put it in.

Having seen off Boreham Wood in the semi-final, they left Notts County shellshocked with a devastating first half showing.

An early goal from George Thomson was soon added to by defender Connor Hall and in truth it could, and probably should, have been more at the break.

Big chances came and went for Town, the woodwork was rattled as Notts creaked under the pressure and the high intensity pressing.

Yellow shirts swarmed all over the pitch for the whole game, suffocating the Magpies whenever they got on the ball.

Cal Roberts did pull one back inside the first minute of the second half but Jack Diamond added a third for Weaver’s side and their names were etched in club folklore.

Harrogate were ahead inside five minutes at an empty Wembley when Thomson finished a good move.

Hall switched the ball to right-back Ryan Fallowfield who put in a perfect side-footed cross where Thomson nipped in ahead of the Notts defender to apply a crucial touch past Sam Slocombe.

The dream start could have got even better inside nine minutes when Aaron Martin – playing only his second game for Town – escaped in behind but saw his low shot slip the wrong side of the post.

Notts were reeling and they were again breathing a sigh of relief soon after when Jack Muldoon hooked just over inside the box.

The Magpies found their way into a decent position in the 15th minute when Richard Brindley’s low cross was met by Kristian Dennis’ poked effort that was well blocked behind by Fallowfield, excellent all game, for a corner.

But despite momentarily steadying the ship, Harrogate did eventually get their second on 28 minutes.

First Fallowfield won a free-kick on the corner of the box. Thomson whipped in a dangerous ball where Hall stretched out a leg at the far post to brilliantly steer the ball into the net.

Weaver’s side were brimming with infectious energy. Skipper Josh Falkingham slipped Diamond in behind the County defence but, despite lifting over Slocombe, the ball was hacked behind by a covering defender.

While the Wembley turf was crumbling underneath Notts, Harrogate looked commanding. They could have been three goals up at the break.

Martin squeezed a shot off inside the six-yard box that pinged back off the post. Magpies boss Neal Ardley had little choice but to twist at the break with a double change from the bench.

Wes Thomas and Enzio Boldewijn came on and within 50 seconds of the restart the lead was cut – Roberts firing in a free-kick past the outstretched hand of James Belshaw.

Roberts provided the magic with a fantastic solo goal in their semi-final against Barnet and County were looking for more from their wide-man.

He whistled wide from distance after drifting infield before Kyle Wootton forced Belshaw into a low block at his near post.

At the other end Muldoon had a chance to re-open the two-goal cushion but he placed a loose ball wide when well placed in the box.Diamond made sure they wouldn’t rue it on 71 minutes.

Jon Stead sent Muldoon, who timed his run to perfection, scampering in behind to send a low cross that Diamond expertly steered into the back of the net.

Town still had to be alert – a smart save by Belshaw kept out Thomas before Fallowfield flung himself in front of Michael Doyle’s follow-up.

Stead was the width of the post away from adding a fourth in stoppage time but it didn’t matter. Put the kettle on.