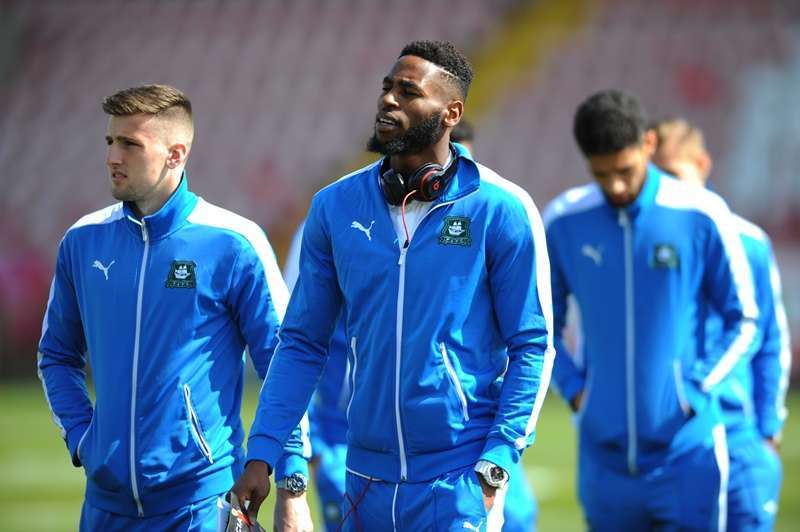 IF you’d dangled a potential Wembley final in front of Jamille Matt two months ago, he’d have thought himself the butt of a cruel joke.

The plan was for Fleetwood’s £300,000 record signing from Kidderminster to hit the ground running this season after a year-long anterior cruciate ligament injury had wrecked the previous campaign. In reality, even a place on the bench was too much to ask for by February.

But, while the Cod Army fight for their League One lives today, Matt is busy plotting a path to Wembley after an initial 28-day loan at play-off-bound Plymouth turned into a roaring success.

The in-form striker, who has tallied five goals in his first ten games at the Pilgrims, said:. “I always had the belief in myself about scoring goals, if I was playing and fully fit.

“Little parts of my game were not back up to full speed at Fleetwood. I thought I deserved a chance, but I didn’t get it for whatever reason. So, Plymouth was a great chance for me to show what I can do.

“I just came and slotted in straight away. It’s a tight-knit squad in a different part of the country and the lads helped me settle. So far, I’ve been happy with what I’ve done.”

Matt’s fortunes could have shaken out differently at Fleetwood had it not been for the September departure of Graham Alexander, for whom the 26-year-old has nothing but praise for the support he was shown during his time on the sidelines.

“I did worry, after being out for a year, that I was coming up to the end of my contract, especially as I didn’t feel I’d shown my best form for Fleetwood before that,” admitted Matt, who has also spent time at Stevenage this year.

“Any player will tell you it’s a fear to hear that you’ve got that type of injury. You know it’s not going to be an easy ride back to your best.

“But the gaffer said at the start of January that they were intending to talk to me at the end of the season  and they were able to offer me something. I was happy about that and I’ve learned a lot from Graham Alexander. I can’t thank him enough for how he’s helped me – and, hopefully, I’m taking on board now what he’s said.”

But the likelihood is that Matt will  be searching for a new permanent home when the season is done.

His contract is up and new Fleetwood boss Steven Pressley is clearly less than convinced. Remaining at Plymouth is an option on the table, and Matt admits he’s been swept up by the storylines yet to be written down on the south coast.

One of those plot twists came just three weeks ago as Matt scored in a dramatic late comeback victory at Portsmouth – with the two clubs now set for a Dockyard Derby showdown in the play-offs.

“It was a great feeling,” Matt added. “It was a full house and the reaction from the Plymouth fans when I scored, and also when Gregg (Wylde) scored the winner, was absolutely crazy.

“It was a massive game and did not feel like a League Two game because of the quality of players. But I would sacrifice that goal right now to get a couple during the play-offs.

“Anyone who knows me will say I have got to enjoy my football, and I’ve not enjoyed myself like this for a long, long time.

“Staying here is definitely an option, but all I’m thinking about is playing the games in front of me.

“In the past I’ve listened to speculation about my future and taken my eye off the ball a bit, so I’m not going to make the same mistake again.”

*This article was originally published in The FLP on 8 May 2016.