Doyle plays on through injury to lead Pompey’s promotion charge 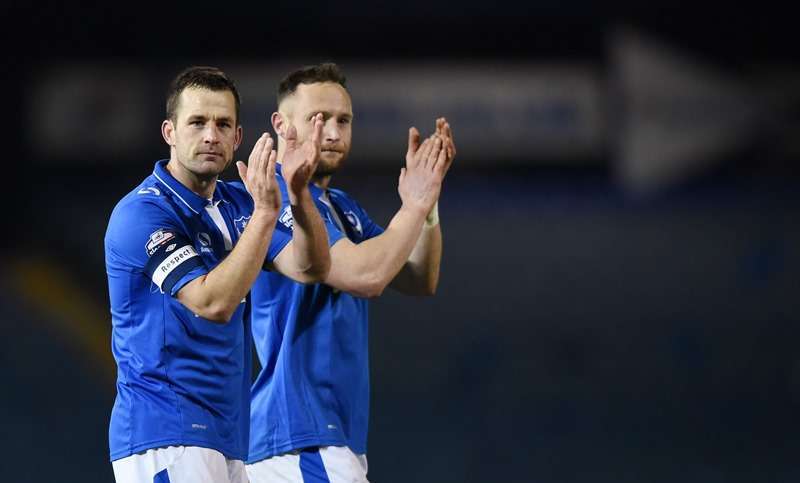 WILD horses could not drag skipper Michael Doyle away from Portsmouth’s promotion push – and nor, as it turns out, could a broken leg.

Ever since his left leg buckled underneath him in a game against Northampton on December 19, the 34-year-old has carried an injury that few would have contemplated playing on with.

The initial fear was that he had torn his cruciate ligaments but when the diagnosis came back as a fractured shin – typically requiring at least a six-week lay-off – Doyle had no plans to put his feet up.

“I said ‘that’s not happening’, I was adamant,” the veteran midfielder recalled. “I spent a couple of days with the manager to-ing and fro-ing before the Leyton Orient game on Boxing Day and I said, ‘Listen, if I’m not fit I wouldn’t play’ – I’ve come to know my body over my playing career and I felt good.

“Two minutes in and the first shot I tried was excruciating! I told Sean Duggan, our physio, ‘I’m going to need some painkillers here.

“He wasn’t keen about that, but if you’re fit enough all you want to do as a footballer is play.

“The initial injury though, I’d never felt pain like that before in my career – it was horrible.”

From there started a regimen of leg programmes in the gym with Duggan, routine icing of the affected area and mercifully a two-week rest after Doyle somehow struggled through three games in a week over the New Year.

Now, Doyle insists, he is over the worst and can see the campaign out before a period of rest in the close season should see the injury heal naturally.

Indeed, the story would never have been told if boss Paul Cook had not let the cat out of the bag after hailing his skipper’s display against Dagenham & Redbridge last weekend.

Portsmouth needed a captain’s inspiration as they trailed bottom-of-the-table Daggers 1-0 at half-time – and it came by way of Doyle’s boot.

His stunning volley sparked a 4-1 turnaround and marked the first time this season that Pompey have won three league games on the trot after a series of false dawns.

The nadir had come only last month, when struggling Newport put three past them at Fratton Park, though a few choice words from Cook seems to have done the trick.

“The manager wears his heart on his sleeve and I can only imagine how frustrated he gets at times with us as players,” added Doyle.

“So many times we’ve got in good positions, winning two games on the bounce but not winning the third and Newport was a fine example of that. Saturday was the first time we’d won three in a row all season, so now we’ve got the monkey off our back. I was just lucky enough to get the equaliser.

“The people down here love their football club, and every week when you go away they’ve filled every allocated seat in the ground.

“A lot of lads come here for that reason and it would be special to get promotion, we don’t take playing here for granted.”

Pompey had a seven-point buffer inside the play-offs – along with a game in hand – heading into this weekend, giving them reason for optimism.

And Doyle, though he is four months shy of his 35th birthday, aims to keep playing for a while yet.

“Some people like to think I’m a hard man but the reason I’ve been able to play for this time so far is that I’ve looked after myself during the offseason,” he said. “I’ve always wanted to come back fitter and my body has not given up on me yet!”