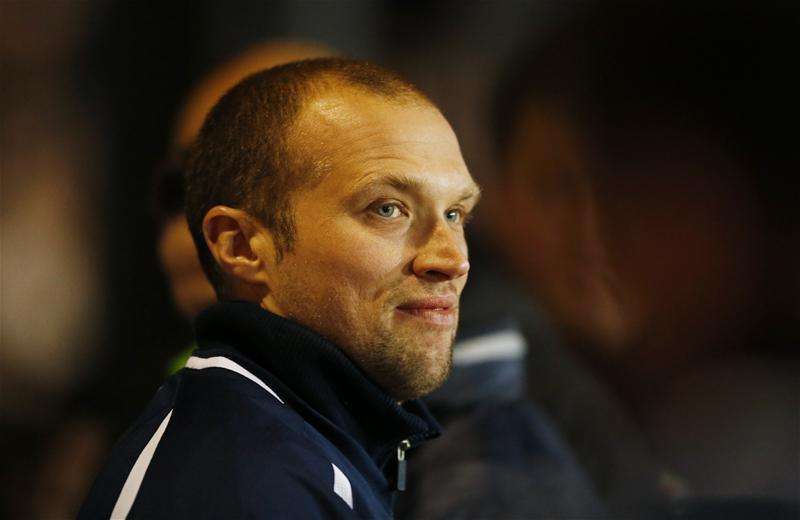 When Warren Feeney quit Plymouth to take his first coaching role at Salisbury, his old gaffer, Roberto Martinez, immediately tapped out a text.

“Congratulations,” said the Spaniard, who signed Feeney for Swansea in 2007. “And welcome to the world of stress.”

Yet, as Martinez knew well enough, the new manager of Newport County was never a man to take life – or indeed football – too seriously.

Quick-witted with a booming voice and infectious grin, the striker was the dressing room joker everywhere from Bournemouth and Stockport to Cardiff and Plymouth.

“Warren is a fantastic lad,” said Nigel Worthington, who handed Feeney the majority of his 46 Northern Ireland caps.

“He always has a smile on his face and always has something to say. He is a bundle of energy who lifts team-mates and gets a crowd going. It’s so refreshing to work with someone like that.”

Craig Levein, his manager during a loan spell at Dundee United in 2008, called Feeney ‘the loudest man in the world’.

Riccy Scimeca, a team-mate at Cardiff, remembers a man perpetually on the wind-up. “Michael Chopra was probably the No.1 prankster, but Feeno pushed him close,” said the former Aston Villa defender. “He was a devil and not a shy lad either. His mouth was always going and he never stopped smiling.”

Feeney’s comfort with dressing room banter is unsurprising. Grandfather Jim was a defender who made more than 200 appearances for Ipswich and, as a boy, Feeney spent his life around footballers as dad Warren Snr plied his trade with the likes of Linfield and Glentoran.

Though Jim died when Feeney was an infant, Warren Snr always told his son to simply enjoy the privilege of playing football for a living.

That ebullience was apparent from his early days in Belfast (where he played alongside David Healy in a trial game for Manchester United) to the apprenticeship at Leeds, where he became close friends with Aussie star Harry Kewell.

“Warren’s never changed,” said Kewell, who was best man at Feeney’s wedding. “He is a character who always brought a little bit of light-heartedness if teams were down.

“He has a great heart but he also knew what he was talking about with football, so I always knew he’d make a quality manager. lt’s been great to see him make that step and I think he’ll go a long way in the game.”

Yet, if managers valued Feeney’s personality, they also warmed to his work ethic.

Though never the most gifted, the striker possessed legs and heart in spades.

“My game is blood and thunder, chasing things and upsetting people,” he said last year. “That’s how I made a living in England for 17 years.”

One beneficiary was Steve Fletcher, the Bournemouth striker who formed a prolific partnership with Feeney in the early 2000s and remains in touch to this day.

“Warren first came on loan from Leeds, then we got him permanently,” he said. “On a personal level, we got on great. There was nothing to dislike about Warren.

Everything he did was with a passion, with a smile on his face. Nobody from that era will say a bad word about him.

“As a player, he wasn’t rapid but he was sharp. And he’d work his nuts off for the team.

“Even when he wasn’t scoring goals, he was working back, chasing down centre-halves, winding people up.

“He was a workhorse who never whinged about the role he was given and I’d put him up there as one of the best partners I’ve had. He made my job easy.”

Feeney was the Cherries’ player of the year in 2002 and, over the next decade, would be similarly appreciated at Stockport (where he scored 15 goals in the 2004-05 season), Luton, Oldham and Plymouth, not to mention a host of loan clubs.

But his most passionate performances were always reserved for his country. Capped for the first time in 2002, Feeney – who scored five international goals – set a new record by becoming the third generation of one family to play for Northern Ireland.

“He was an inspiration to have around,” said Worthington. “The pride he had in that shirt carried him and he relished every second he spent on the pitch. What an example.”

Naturally, then, the 35-year-old demands the same of his players. As a coach at Salisbury and then manager at Irish side Linfield, where he was appointed in 2014, his standards were simple.

“All I ask is honesty and desire,” he said. “I like positivity around the place but I can’t take sloppiness.

“I’ve never been brought up like that. I’m not one who will just sit there and pick up my money. I want to earn it.”

He will certainly need to do that at Newport, a club so low on cash that two of their last three managers jumped ship. Fletcher, though, has backed his old friend to succeed.

“Warren always had a burning ambition to be a first-team manager,” said Fletcher, now a coach at Bournemouth.

“Yes, he’s inexperienced, but the same could have been said about Karl Robinson at MK Dons and Eddie Howe here. Everybody needs a chance.

“He’s had a great grounding in Ireland. He’s a great personality. And one thing I know for sure is that he’ll put every ounce of his heart into the job.”