Home / Features / Roy Carroll: I’ll get Notts up before I start thinking of Euros

Roy Carroll: I’ll get Notts up before I start thinking of Euros 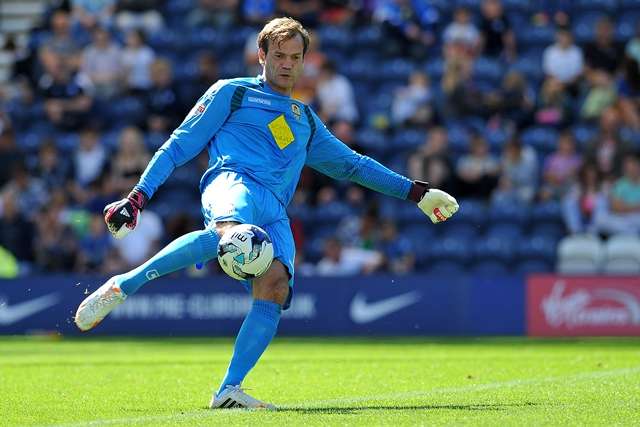 A GLITTERING opportunity lies in wait for Roy Carroll this summer but the veteran stopper has no intention of taking his eye off the ball at Meadow Lane.

Notts County keeper Carroll is in an unusual position, plying his trade in the fourth tier of English football yet hoping to play his way onto the plane for Euro 2016.

The former Manchester United goalkeeper was part of the Northern Ireland squad that secured qualification to their first major tournament since 1986.

At 38 and in the twilight of his career, Carroll could be forgiven for looking ahead to playing on the big stage against some of the world’s best next summer.

But the 41-times capped international is keen to stay focused on club matters before then and is taking a down-to-earth approach.

“Of course I am looking forward to the Euros but if I don’t play well for Notts County, then I won’t get into the team,” he said.

But Carroll is proud to have helped Northern Ireland to the finals – and believes there’s no reason why League Two players shouldn’t be considered for international action. 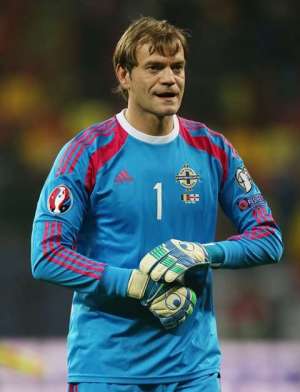 Still got it: Notts County ‘keeper Roy Carroll isn’t taking the gloves off just yet in fight to get Magpies promoted (Photos by Action Images)

“It has been a long, long time since we’ve qualified for a major tournament,” he said. “It is a great achievement and excellent for the Northern Ireland fans who travel all over Europe.

“It doesn’t matter if you are in League Two or the Scottish Premiership – if you are good enough to play for Northern Ireland, then you should play. We aren’t the biggest country in the world.

“We have got a few players playing in the Premier League – it’s a good mixture. I think it’s all down to the team spirit.

“To get on that plane for the summer would be great, I just have to keep playing well for Notts County.”

After dropping down from League One last season, the pressure was on the Magpies and manager Ricardo Moniz to bounce straight back up again. One win from their first five league games was an eye-opener.

“We had a very tough start to the season,” said Carroll. “We had a lot of players coming in and a lot of changes but we are settled now and we have picked up a lot of points.

“The manager has kept the same team and things are looking good at the moment but there is still a long way to go. It’s a tough league.”

Last week’s FA Cup exit at the hands of Non-League outfit Salford City was a hammer blow, but their league form has, undeniably, improved.

Notts are unbeaten in each of their last four league outings, conceding just twice in the process. In their last league game two weeks ago, they beat high-flying Portsmouth 2-1 at home.

Ahead of the weekend programme, they were down in 15th place, but only four points off the play-off places.

Carroll has played his part but he’s happy to share the credit with defenders Mike Edwards – also the club’s strength and conditioning coach – and Alan Sheehan, who rejoined the Magpies on loan from Bradford in September.

“No matter what country or league you play in, you want to try and keep a settled back four and keep clean sheets, and we have kept two in four league games,” he added. “It gives people belief.

“We have Mike Edwards, the fitness coach, at centre-half and he has been fantastic for us since he came in, and Alan has done well, too.

“He wants the ball from the back and he talks a lot to the back line – that’s what we Irish people do! It’s great to have another guy in there, talking to the back line. Hopefully we can keep him for another few months.”