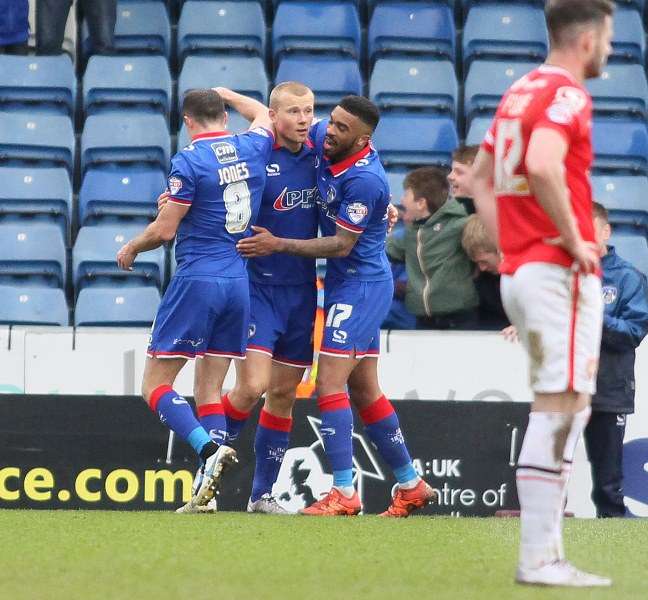 A GENERAL rule of thumb while fighting a relegation battle is not to give your rivals a leg-up – which is why Doncaster Rovers scored an own goal by letting go of Curtis Main.

The 24-year-old helped revive a Latics side that were treading water down in 23rd on his arrival and, such has been their transformation, they secured their League One status for next season with two games to play.

Though initially struggling for fitness, Main’s goals in April against Swindon, Walsall and Southend all proved crucial to Oldham’s Great Escape, while Ferguson was left ruing the one that got away.

Doncaster even requested that he return to the club in March, but Main, flourishing with the benefit of consistent first-team football, wanted to stay at Boundary Park.

That is not to say the striker holds any grudges against his parent club, but he admits that putting himself first was the only option.

“At the time, the opportunity was to play for Oldham – and that’s what I wanted to do for the rest of the season,” said Main. “To play football was why I came here.

“It’s a bit peculiar. I want Doncaster to stay up, regardless of where I’m playing. I don’t think they belong in League Two.

“I’ve been a spectator. I can’t influence what they’re doing, but I’ve been hoping they can get out of trouble.

“I just needed the opportunities to play. That’s what it comes down to, and for one reason or other that didn’t happen at Doncaster.”

In truth, the first shoots of growth at Oldham were in place before Main pitched up as club legend John Sheridan was ushered back for his second stint as manager following the failed David Dunn experiment.

But if Main had not looked at the league table prior to joining, he would probably have believed all was rosy at the Latics. Before this weekend, they had lost just three times in 13 games since his arrival.

“I had a call from John about playing for Oldham,” said Main. “We had a chat and there were no hidden agendas – I wanted to  play football and he wanted me to help improve the team.

“I’d been suffering from an ongoing back problem and we weren’t able to put a finger on it for a while, but it’s cleared up and it’s felt right since I started getting game time. Since then, I’ve pretty much played every minute of every game.

“Everyone’s been going into work each day with a smile on his face. John has been keeping it pretty simple.

“There are no hidden tricks in how we play. He is just honest with his players and he has set out exactly what is expected of us. He is happy as long as you’ve given 100 per cent and that’s put confidence into the boys.”

With just one game left to play, the South Shields-born Main now knows he will stand at something of a crossroads when his time at Oldham comes to an end.

He admitted: “All I can do is continue to play and I’ll have to sit down and discuss my future with Doncaster in the summer.

“Hopefully, I’ve proved myself and I always knew I was more than capable of playing in League One, if I was given the chance.”