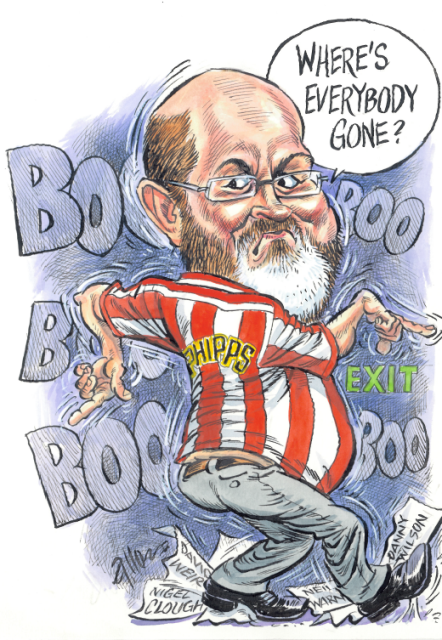 WE’VE all been there. A night out clubbing with four or five mates, who, one by one, strike lucky and slope off into dark corners.

Then it’s just you, dancing like a saddo and sobering up by the minute. Sheffield United fans know that feeling very well.

Not so long ago, League One was fit to burst with fallen giants. Norwich, Southampton, Charlton and Wednesday. Even Wolves dipped their toes in the murk.

Now they are all gone. The music has stopped. The floor is sticky. The lights have come on – and the Blades are the only ones still bopping away forlornly.

At least the spurned clubber could go home and forget the whole sorry mess. For United, there is no such refuge.

They were title favourites at the start of the season, but Tuesday’s humiliating 4-2 drubbing at home by relegation-haunted Shrewsbury left Nigel Adkins’ men marooned in mid-table. Winless in five league games, even the play-offs are looking a struggle.

Spanish maestro Xavi announced in midweek he was a fan of the Blades. “They are in the third division yet get 20,000 fans every week,” said the 35-year-old, after meeting a young United supporter. “That is incredible. In Spain, it would be a few people and the families of the players.”

Yet, even this sadistically loyal band can be pushed only so far. When the final whistle finally put an end to Tuesday’s misery, Bramall Lane rang with frustration and fury.

As well it should. Unlike Xavi, a man who understands the game, Blades chairman Jim Phipps suggested three weeks ago that the fans needed to “step it up” and “could do better”.

Which is bit rich considering the downward trajectory the club has steered from the moment he stepped aboard.

United’s problems begin and end in the boardroom. Phipps, Kevin McCabe, the lesser-spotted Prince Abdullah bin Mosaad bin Abdulaziz Al Saud – the Blades have more directors than Universal Studios but seemingly no semblance of a strategy.

There are essentially three ways to win promotion from the Championship. One is to chuck a load of cash at it, like QPR. Another is to concoct a philosophy, then sign players and managers who fit the mould. Think Swansea or Watford. The last – best illustrated by Bournemouth – is to keep faith with a manager, thus creating stability and spirit.

United haven’t done any of that. Their best players have been sold to service what, until 2013, were crippling debts. That’s fair enough.

Managers have been jettisoned like toxic waste. Danny Wilson, whose win ratio bettered Neil Warnock’s, was sacked after defeat in the play-off final, despite his season being ruined by the arrest of Ched Evans.

Replacement David Weir lasted 13 games. Nigel Clough, who also reached the play-offs, was binned on the back of social media jabbering about perceived negative tactics. And, as for a philosophy, you’d have better luck finding Shergar.

Phipps aimed a thinly-veiled dig at Nigel Clough, accusing a former manager of “undermining” the technical board by signing injured players. But who sanctioned the sales? Who signed the cheques?

Unless there’s a smarter plan than simply sacking managers and hoping for the best, the Blades could spend many more years in the depths of the Football League.