Humiliation at Hull turned our season around, says Clarets Boyd

Posted on May 11, 2016 by Adam Ellis in Latest News, Skybet Championship | 0 Comments 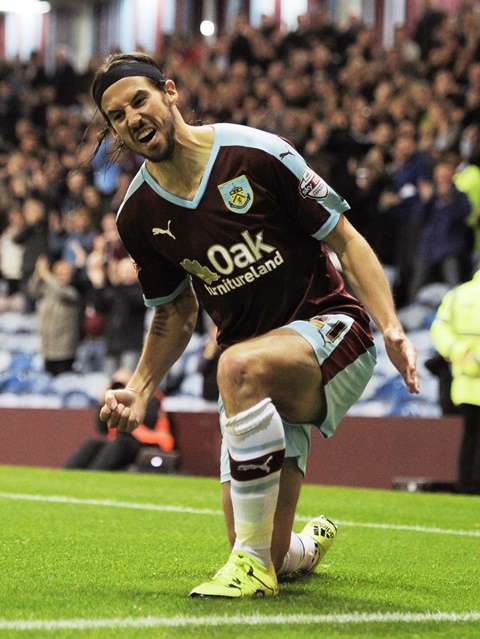 GEORGE Boyd has hailed the Boxing Day humiliation at Hull as the catalyst for Burnley’s record-breaking return to the Premier League.

A 1-0 victory over QPR on Monday saw the Clarets seal promotion with a game to spare, just 359 days after being relegated from the top flight.

Yesterday’s title-clinching victory at Charlton also set a post-war record of 23 games unbeaten, a run stretching all the way back to a 3-0 hiding at the KC Stadium on Boxing Day.

That insipid defeat left Burnley nine points shy of leaders Derby and Boyd says the subsequent inquest – a no-holds-barred meeting at the club’s Gawthorpe training complex – sparked a revival that propelled the Clarets to glory.

“That game against Hull, we were way off it – absolutely nowhere near where we should have been,” said the 30-year-old, who has scored five goals in 47 appearances this term.

“It wasn’t good enough, and we all knew it. We held a team meeting after that game and everybody got what they wanted to say off their chest.

“A few home truths were told and it was tough to take but I look back now and think it was the turning point in the season.

“The upshot was that we needed to get back to basics, start getting in people’s faces again and, as long as we did that, the quality would shine through. We all agreed that our only aim was to win the title.

“It obviously worked. We’ve played some great stuff at times but, since that meeting, we’ve also found a way of winning when we weren’t playing well. We just ground it out.

“I’ve been in promoted sides before and there’s always that feeling you’ll win every game. Since Boxing Day, everyone here has felt like that.”

Burnley’s return to the top flight represents a fifth promotion in eight years for Boyd, who enjoyed three promotions with Peterborough before helping Hull into the Premier League in 2013. He knows how to stay the course – and he isn’t the only one.

“If you look at our regular starting line-up, I think Michael Keane was the only one who hadn’t won a promotion,” added the winger. “I doubt anyone could match our experience in that sense.

“That’s why keeping the side together was vital. We all had that experience of winning and we’d also competed week in, week out in the Premier League.

“We lost a few key players like Jason Shackell and Danny Ings but the gaffer (Sean Dyche) bought really well. Andre Gray’s obviously been a massive part of our success this year and Joey Barton’s come in and done brilliantly. I looked at our side on day one and thought ‘Yeah, we’ll do this’.

And do it they have. Draws for Middlesbrough on Friday night and Brighton on Bank Holiday Monday meant Burnley – who kicked off later on Monday – took to the field against QPR knowing victory would seal the deal.

After a tense first-half, the Clarets found their groove and Sam Vokes headed his 15th goal of the season to ensure no final day nerves.

“There are a few pubs around the ground and when we went out to warm up we could hear the cheers, so we knew Brighton were losing,” added Boyd. “We didn’t realise they’d made it 1-1 in the last minute but the crowd went mental at full-time so we got the message that a win would be enough. If anything it helped. It made us focussed, it made us work harder. We were desperate to get the job done.

“We’ve had a taste of it before and we came close to staying up. I’m sure the gaffer will spend a bit of money on reinforcements and, this time, I’m convinced we can do it.”