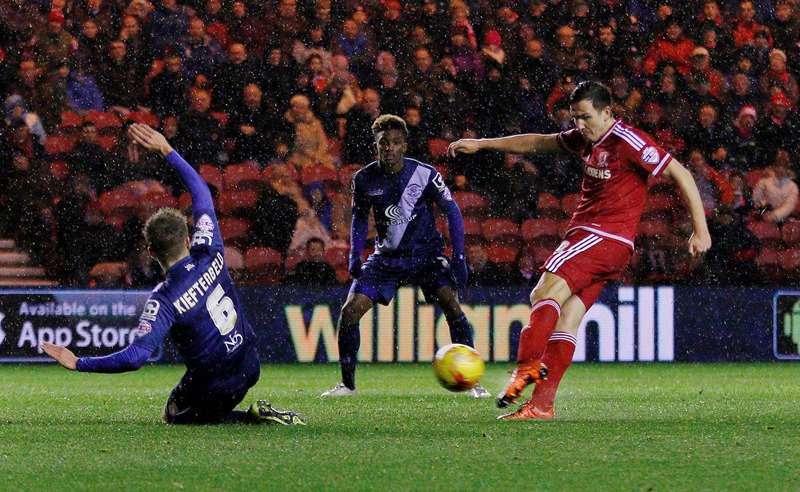 Middlesbrough travel to St Andrew’s on Friday looking to go top of the Championship table, and will face a Birmingham side with only one win in their last 10 games.

Second-placed Boro are currently level on points with leaders Burnley and third-placed Brighton, who face QPR and Derby on Monday respectively. Middlesbrough will go top of the table if they manage to avoid defeat.

Boro boss Aitor Karanka will be sweating over the fitness of first choice left-back George Friend. The 28-year-old was forced to sit out Boro’s disappointing 0-0 home draw with Ipswich due to a hamstring injury. Should he be deemed unfit former Manchester United defender and Leicester City loanee Ritchie De Laet should deputise for Friend.

Birmingham have injury worries of their own with Jon Toral (hamstring) and Jacques Maghoma (ankle) ruled out. The Blues could also be without goalkeeper Tomasz Kuszczak who has a broken nose and Paul Caddis who has calf trouble.

Despite Birmingham’s difficult run, one that has seen them fall out of the play-off picture, Karanka still insists that the trip to the Midlands will be a tough one: “It’s difficult because nobody gives us an easy game. We played against Bolton who were playing for nothing and it was difficult, we played against Ipswich and they celebrated the point like they’d won a final.”

Birmingham’s poor form has seen a promising season transform into a somewhat mediocre one, despite the disappointing results and mounting injury worries, boss Gary Rowett claims his side can still grab a result.

“We’ll have fewer players to choose from and perhaps fewer options, but we’ll put out as strong a team as we’re capable of doing and we’ll still feel that that team is good enough to get a result,” the former Burton boss said.

Boro have a remarkably poor record at St Andrews; they’ve only picked up one victory since 1978. That came in 2005, when two goals from Mark Viduka helped the away side pick up a comfortable 3-0 win.

Middlesbrough face Brighton on the final day of the season, and know that any result in this fixture will not prove decisive in the race for promotion, but the visitors will want to turn around the form that has seen them draw two in-a-row.