O’Donnell relishing challenge for No.1 shirt with Fielding 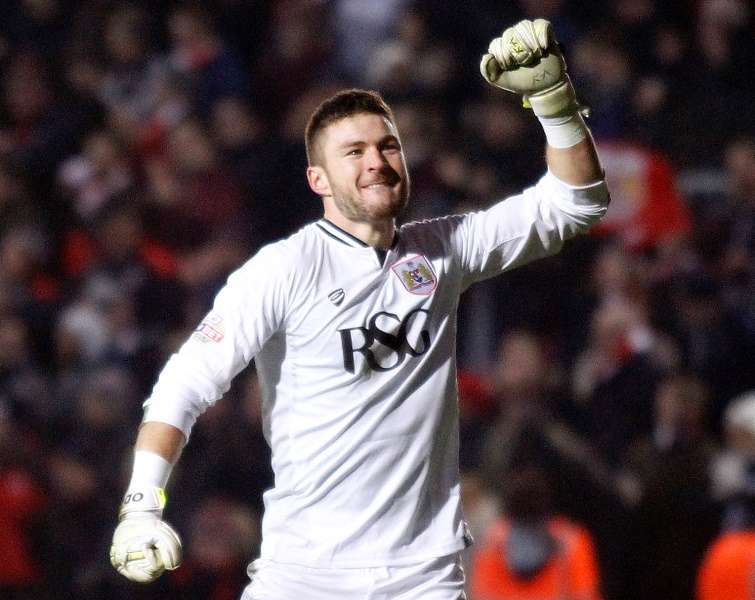 RICHARD O’Donnell is not a man in search of an easy ride, which is exactly why the Bristol City stopper is relishing some fierce competition from Frankie Fielding.

Having kept 21 clean sheets in 37 appearances last term, earning him Walsall’s player of the year award, it would have been easy for O’Donnell to stay at the Saddlers, where he made 105 consecutive appearances.

Keen on a fresh challenge, O’Donnell joined Wigan last summer, only to find veteran Jussi Jaaskelainen standing between him and regular game time.

A loan move to Bristol City followed in January and the 27-year-old made that deal permanent last week, penning a two-and-a-half year contract and celebrating with a clean sheet in victory at Charlton.

Now, he faces another test in the shape of former England U21 goalkeeper Fielding, back in full training following a side strain. O’Donnell is not about to shy away.

“It was an easy decision to join City on a permanent deal,” he said. “Everyone has been fantastic for me and my family.

“It’s a great city and, when I first came down, I was in a hotel for ten days and got to check it all out. The main thing is that I wanted to play football. Ask any player and they will tell you they are happiest when playing. I am no different and I’ve been enjoying my football again.

“I felt I could play at Championship level. I am confident in my abilities, so when City came in for me I jumped at the chance and hopefully I have proved I belong here so far.

“I am the kind of person who never takes anything for granted so, while I am playing now, I know that Frankie is a top-class goalkeeper and will be eager to push me when he is back.

“He will be right behind me, looking for a way back in, so there is no chance of resting on my laurels, which is exactly how I like it.

“I was like that at Walsall, even when I played 105 games in a row. I never took my spot for granted and I always work hard and keep trying to improve.”

O’Donnell may enjoy continuity on the pitch, but he certainly hasn’t had much off it since arriving at Ashton Gate, with Lee Johnson replacing Steve Cotterill as manager. O’Donnell is already impressed by what he has seen.

“It has all been very positive so far,” he added. “He is  getting his own ideas across and I’m confident he can lead us out of trouble.”