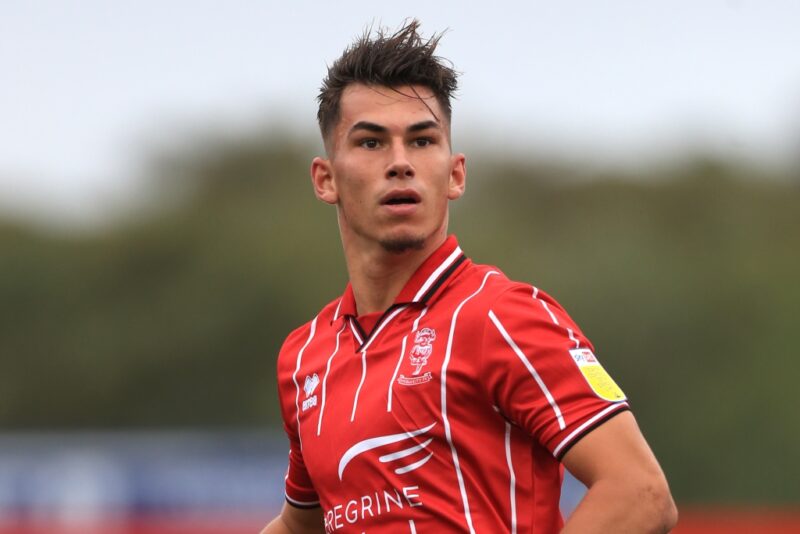 DITCHING fashion shoots for football boots in pursuit of his Premier League dream is working out perfectly for Lincoln’s Dutch star Lewis Montsma.

The 22-year-old centre-half has become an instant hit at the LNER Stadium courtesy of dominant displays at the back combined with a goal threat – Montsma’s winner at Swindon on Tuesday night was his seventh of the season in all competitions. Lincoln continue their League One play-off push tonight when they host Wigan Athletic, for multiple betting markets check out Unibet.

It could have all been so different had he pursued a burgeoning modelling career, which was sparked by a chance encounter with a former judge on Holland’s Next Top Model and quickly led to an appearance at a Burberry fashion show in 2018 – where Kendall Jenner and Irina Shayk were among a glittering cast.

But when push came to shove, football was Montsma’s first choice and the 6ft 4in defender has taken his game to new heights since arriving in Lincolnshire from FC Dordrecht over the summer.

“Burberry was my only show but I did some smaller bits for magazines too,” Montsma said of his modelling career. “It was nice to do but I didn’t think about how big it actually was, with all the names that were at the show.

“They were different nerves to football. I didn’t care too much about the modelling, I just had to do it. When I was about to walk out I was shaking but once I was out there, I enjoyed it.

“I couldn’t do any more after that because of football – I’m not big enough as a footballer or model to do both at the same time! Slowly, I just rolled out of it but maybe in the future I could (do both).”

Having dominated playground kickabouts with school pal Matthijs de Ligt, now at Juventus, while growing up in Amsterdam, Montsma was part of Heerenveen’s academy before being released aged 18.

This led to a series of trials in Italy and one with Oldham, which cemented a desire to play in England – an opportunity that arose this summer when Lincoln were suitably impressed by what they had seen from Montsma at Dutch second-tier outfit Dordrecht.

“The players are stronger here and everything goes quicker,” he explained. “The second league in Holland is professional but there are more young players – the big clubs have reserve teams in the division – and you can’t be relegated.

“This is the real deal. It feels more serious here.”

Scoring a winner on his Lincoln debut, a Carabao Cup tie at Crewe, was the perfect start and Montsma relished sharing a pitch with one of his heroes when Liverpool visited the LNER Stadium later in the competition and he again netted.

“Virgil van Dijk is so big and strong and I learned a lot from playing against him – and all their players,” said Montsma, reflecting on Liverpool’s 7-2 third round win.

“I didn’t manage to speak to him as he only played the first half but I spoke to Divock Origi and got his (Origi’s) shirt, which was nice.”

Having sampled a taste of Premier League opposition, the ambitious Dutchman hopes to one day meet as equals while also ensuring Lincoln – who sat third in League One going into the weekend – continue their recent rise.

“The run they have been on in the last four or five years has been amazing, so I hope to help them continue that line upwards,” he added.

“Before the season started, the aim was the play-offs. But when you look at some of the games we’ve won, more might be possible. We believe we can beat anyone.

“My ultimate goal is to play in the Premier League. I want to aim high and it would be amazing to reach the top.”