EFL chief executive Shaun Harvey was desperate for the Checkatrade Trophy to kick off after a barrage of negative publicity in pre-season – but the gates on opening night might have changed his mind.

Just 392 fans witnessed Fleetwood Town’s 1-0 win against Blackburn U21s, the lowest crowd on Tuesday night. But turnstile operators were hardly rushed off their feet at a host of other grounds, either.

There were just 461 to see AFC Wimbledon defeat Swansea’s U21s 3-0, while a paltry 585 witnessed Accrington Stanley’s 3-0 home defeat by Crewe Alexandra and only 760 supporters bothered to turn up for Blackpool’s 2-1 victory against Cheltenham Town.

The only crowd that topped 3,000 was Sheffield United’s 0-0 draw against Leicester City U21s (3,632) at Bramall Lane, the visiting Foxes winning 5-4 on penalties, while there were just five attendances over 2,000. But why was the turn-out so low? Well, the decision to allow 16 invited category one academy sides (in the event, ten from Premier League clubs and six Championship sides) to enter the competition, which has traditionally been for clubs in the lower two divisions of the Football League, has gone down like a lead balloon.

Fans decided to boycott games, hitting clubs in the pocket and garnering a bucketload of negative headlines.

Not many people would argue that the tournament didn’t need a revamp. There had been a serious lack of interest from clubs and usually the excitement ramped up only in the latter stages when Wembley was in sight.

But it’s difficult to argue that the EFL haven’t helped themselves with the way they’ve handled the shake-up of the competition formerly known as the Johnstone’s Paint Trophy.

At the EFL’s summer conference in June, clubs voted to change the format of the competition following a request by the board of directors.

Part of the proposal was a season’s trial in which the 16 category one academy teams would be invited to join. The decision was made on the basis the competition was in ‘serious need’ of innovation to survive.

In the event, 30 of the 48 League One and Two clubs were in favour, while 14 voted against.

However, at that stage those voting for change believed the top clubs in the country would be entering their teams in the competition.

As it turned out, the EFL had egg on their face when the likes of Arsenal, Liverpool, Manchester United, Manchester City and Tottenham all turned down invitations for their Under-21 teams to take part.

They cited scheduling issues, saying they would have a host of age group internationals away when the Trophy games were due to be played – in international weeks.

Fleetwood Town chairman Andy Pilley voted against the planned changes at the EFL’s summer conference in Portugal in June and believes all the right groundwork wasn’t done to ensure the tournament was a success. He also fears the introduction of the academy sides could be the forerunner to B teams in the EFL.

“People weren’t interested in watching Blackburn’s youngsters and there were poor gates across the country – people voted with their feet,” he said.

“In Portugal it was said that the likes of Wayne Rooney could play on your ground if he was coming back from injury, but clearly the research hadn’t been done and the big clubs consulted – they weren’t interested.

“I think it’s the first step towards B teams in the Football League and that would damage what is the best league in the world.”

If the idea of some of the biggest clubs in the country playing the cream of their crop could have been a crowd-winner, losing them was a hammer blow.

And the EFL also have questions to answer as to why they didn’t promote the positive aspects of the changes until the eve of the tournament.

“With £10,000 on offer for each group stage victory, it is clear to see there are now tangible short-term financial benefits to the Checkatrade Trophy, as well as the more established longer-term ones. This has not been possible previously.”

Perhaps if the EFL had banged the drum earlier about the greater financial rewards on offer, they would have alleviated some of the criticism.

But it’s not just about the money. How many fans want to watch their team play group games in the Checkatrade Trophy? There are 46 games in Leagues One and Two, while clubs have also got the FA Cup and EFL Cup to take part in.

Putting on more matches means more cost for supporters, especially if there is significant travelling involved. The vagaries of the group stage system (groups to include one invited club and at least one club from each of League One and League Two) meant you ended up with quartets such as Blackpool, Bolton, Cheltenham and Everton U21s plus AFC Wimbledon, Newport County, Plymouth Argyle and Swansea U21s.

The danger of a group stage set-up is you could end up with dead rubbers further down the line – and what attendances will those matches attract?

One of the other suggested positives for the new-look competition was that it would help the best young players in England get some competitive match action under their belt, though the fact the top clubs pulled out rather ambushed that idea.

All in all, the Checkatrade Trophy has had a tough baptism. There was even confusion over what age group the invited category one teams would be.

In a statement on Monday, the EFL said: “It has been brought to the EFL’s attention that a number of media outlets are reporting that the invited category one teams, due to play their opening Checkatrade Trophy fixtures this week, will  be under-23 teams. This is not the case.

“The eligibility criteria for the competition is as follows: EFL clubs (League One and League Two) a minimum of five ‘first team’ players in the starting XI, as defined under the competition’s existing rules.

Where that confusion arose is a mystery, but it’s a sign of the Checkatrade Trophy’s troubled beginnings. Will things get better? The signs aren’t promising. It could be a long road until the final at Wembley on April 2 next year. 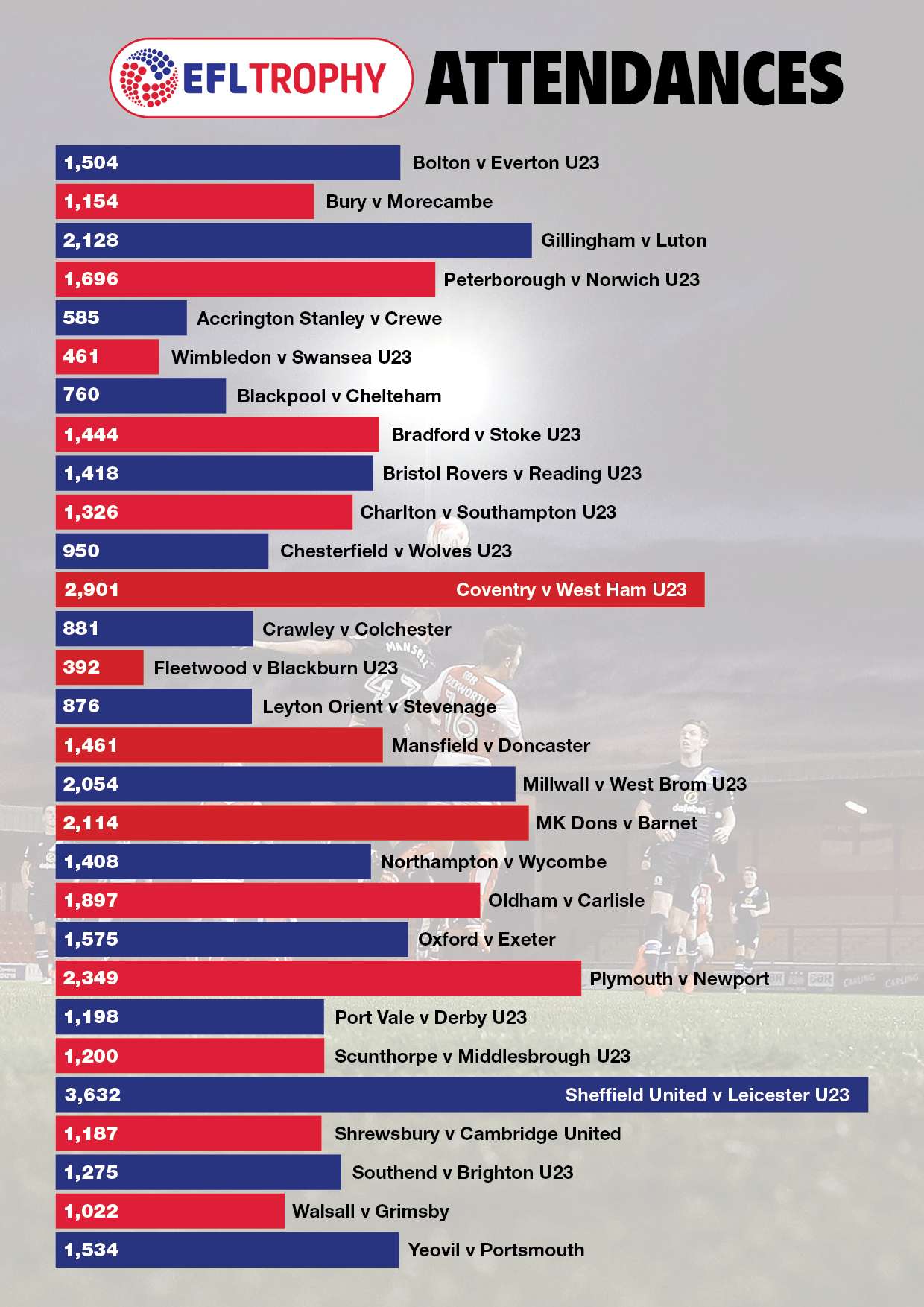