They were 7/5 to win or draw at the iPro last week and duly obliged with a 1-1 share of the spoils against the hotly-tipped promotion contenders.

The Addicks face another stiff task tomorrow against Hull and could be without striker Tony Watt – but they are playing at home and seem to be priced nicely to win or draw again at 3/4.

If that kind of price is simply too short to part with your cash, you might fancy sticking the selection in a double with there to be a draw in at least one half of Brighton and Hove Albion’s match against Blackburn Rovers at 11/25.

Albion were drawing at half time in the majority of their league games last season – 54% of them – and seem to be emulating those statistics this campaign having been level at the break in two out of their three games so far.

Down a division and Tony Mowbray says his League One-leading Coventry side will continue their impressive attacking philosophy when they visit Walsall on Saturday. Coventry have won three out of three so far and have given fans their money’s worth by scoring nine times and conceding just twice.

But third-placed Walsall have also been in fine fettle with two wins and a draw in their opening fixtures. They too have seen an abundance of goals and look set to give Coventry their stiffest test of the season so far. Both teams to score and the game to end a draw could be a decent shout at 9/2. If you prefer a safer bet, both teams to score is 37/50.

In League Two, Dagenham and Redbridge are yet to get off the mark after losing straight games to Portsmouth, Leyton Orient and Exeter. In truth two of those teams are genuine promotion contenders and the third, Exeter, will fancy their chances at a playoff place. But it’s hard to see how Dagenham will negotiate a result against second-placed Wycombe tomorrow and the betting markets reflect that.

Bearing that in mind, we think Wycombe to win with a -1 handicap looks profitable at just over evens, 26/25.

Remember with -1 handicap betting you are essentially giving the other side – Dagenham – a 1-0 head start. If the match finishes 1-0 to Wycombe and you bet them to win with a -1 handicap, the ‘score’ finishes 1-1 and your bet will be refunded thanks to the draw. To win the -1 handicap bet, Wycombe will need to win by at least two goals. 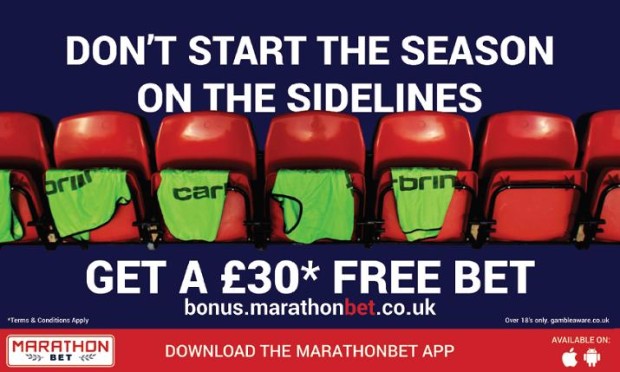