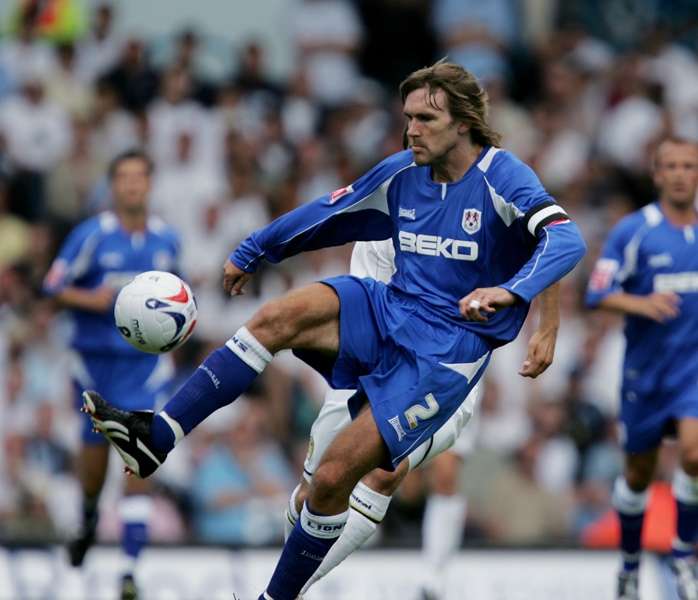 TWENTY years ago, Matt Lawrence stepped off a plane from New York doubtful he’d ever forge a career in the game.

“I’d just graduated from university,” says the 41-year-old. “And at that stage, I was planning to go back over and do my masters. Football was a pipe dream really.”

A trial with Wycombe soon changed that. Signed by the Chairboys in 1996, the full-back made his debut that same year and, over the next two decades, won two promotions, captained Millwall to the FA Cup final and made over 640 appearances for the likes of Fulham, Crystal Palace and Gillingham.

Now a successful analyst, Lawrence recalls those formative days across the pond, the heady days of Millwall under Theo Paphitis – and the silky-skilled behemoth who left him on his backside.

Wycombe Wanderers in 1996. I’d just graduated from university in the States. I went over there on a soccer scholarship, to Hartwick College in New York.

I did American Literature and, contrary to popular perception, I did have to work. It’s the not the same as a basketball or American Football scholarship, where it’s 80 per cent sport and 20 per cent studies.

You have to study seriously and if you don’t keep up a certain GPA (Grade Point Average), you don’t play in the team.

The standard was pretty good. People like Tim Howard, Claudio Reyna and David Weir all took that path. Nowadays the guys tend to leave college and go straight into the MLS. That wasn’t around in ’96 so I came home. I had six weeks with Grays in the Diadora League, then two weeks on trial at Wycombe before they offered me a contract.

Going to the States probably left me four or five years behind people in this country, but I wouldn’t change it. Living in New York for three-and-a-half years isn’t bad and I’ve still got a lot of close friends over there.

I also think it extended my career at the back end. Because I hadn’t slogged my body to death from 16-21, I’d had a chance to finish growing before the punishment started. People like Michael Owen, Kieron Dyer and Jonathan Woodgate all paid a price for that.

I’ve been lucky to work with a few national team managers – Lawrie Sanchez, Peter Taylor and Kevin Keegan. But the man I’d put above them all is Neil Warnock.

I know Neil isn’t everyone’s cup of tea. And even I can’t put my finger on exactly what makes him so successful. I guess it’s just his man-management. He just knows how to create a harmonious dressing room. At Palace, it was always self-policed, with just the right amount of experienced pros to look after everyone else. For any team, getting that blend is half the battle.

He doesn’t treat everybody the same. Psychologically, he knows who to cuddle, whose a*** to kiss, who to shout at. He won’t bawl out a weak-minded player who’ll curl up and cry in the corner. He’ll shout at the thick-skinned ones and make out it’s their fault because he knows they can take it. Basically, he knows how to make people play for him.

There are a few contenders. Tim Cahill, Paul Bracewell, Victor Moses. But the overall best player was Chris Coleman at Fulham. He was head and shoulders above everyone else.

Not necessarily in terms of talent, though he certainly had plenty of it. He made the game look easy and was very strong, very good in the air, a quality passer of the ball. It’s a dreadful shame that his career was ended by a car accident, because I think he’d have been even better. 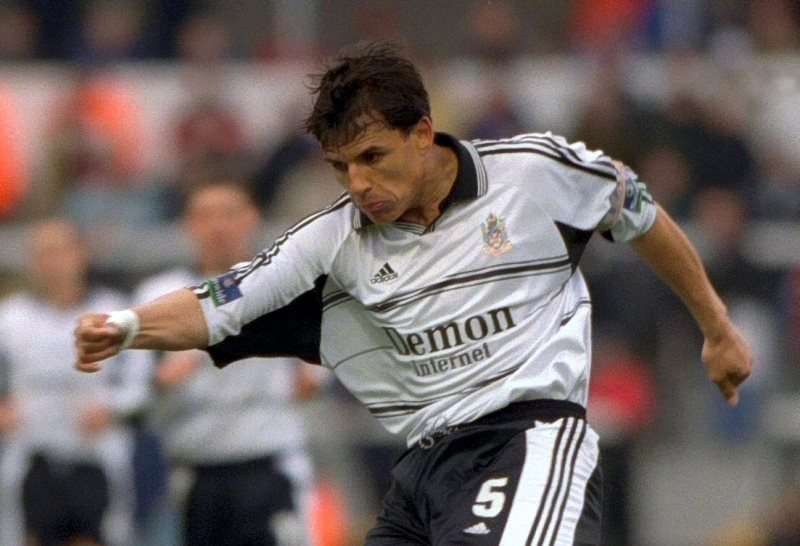 But his biggest strength was as an overall team-mate – he was great on the pitch, in the dressing room, on a night out. A peerless person to have around a club.

With Fulham to Division Two in 1996-97 – though I never really felt part of it. I didn’t join until February and only played about 15 games. By then all the hard work was done and it felt a bit weird getting a medal.

For me, the first ‘real’ promotion was with Millwall to the Championship in 2001. We had a talented side with the likes of Tim Cahill, Lucas Neill, Paul Ifil, Neil Harris and David Livermore. Great times.

Danny Butterfield at Palace. Central to everything on the pitch, and in the dressing room. If you ever needed a physio taped to a lamppost on a night out, he was the man to do it. And he knew all the old-school tricks like cutting holes in socks.

But it wasn’t just the physical pranks. Danny had the gift of the gab and was a very warm human being to boot. A great personality who was also a lot more technically gifted than people ever give him credit for.

During one of my first pre-season trips, we went to some northern army barracks – I think it was Catterick or somewhere like that.

I walked into one of the rooms to find two of my team-mates engaged in a competition. What kind of competition? Well, I think the Viz like to call it relaxing in the gentleman’s way. For a wet behind the ears kid straight out of university, it was a bit of a shock – certainly more funny peculiar than funny ha-ha!

Overall, it’s just becoming a footballer. I wasn’t one of these people like Michael Owen or Wayne Rooney who is destined to be a pro from the age of nine. I had lots of trials at clubs as a teenager and never made it. I did my A-levels, then went off to university. My path was very unusual so to have made a career in the game is something I’m proud of. 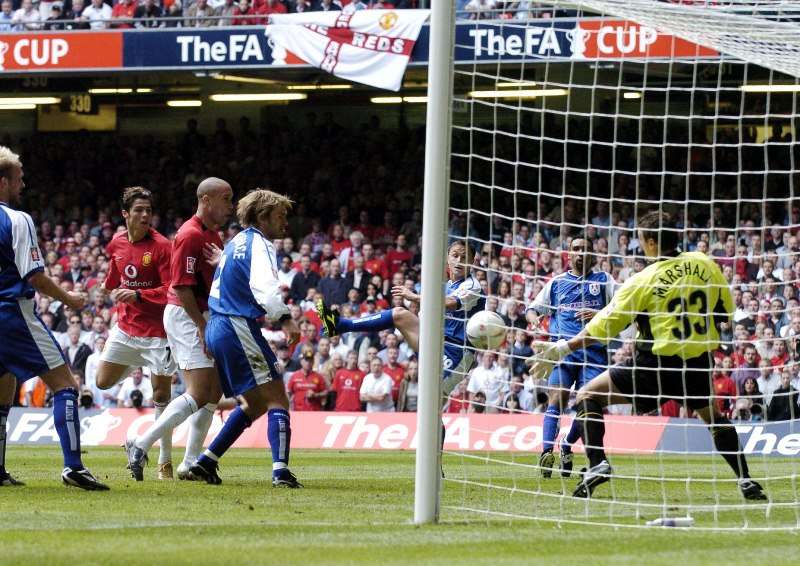 Getting relegated with Millwall in the 2005-06 season. The FA Cup squad had been breaking up for a while, with Tim going to Everton and Lucas to West Ham. The hammer blow came when Theo Paphitis, our chairman, left and took his big pot of cash with him. The budget was slashed to about a quarter of what it had been and the club was decimated. We were never going to avoid relegation. It was a horrible season.

That was when I decided to leave for Palace. It’s something I regret now but, at the time, I just wanted to stay in the Championship. Millwall even offered me a lot more money than Palace but it wasn’t about that.

Carlisle on a Tuesday night. I played almost exclusively for clubs around London, and not the glamorous ones who can afford flights and hotels.

It’s bad enough getting up there but when you know you’ve got a six-seven hour coach journey back and you won’t get home until four in the morning, it’s just miserable. I’d like to thank the Football League schedulers for that…

David Ginola at Spurs. I played against him in the FA Cup when I was at Fulham, away at White Hart Lane.

I hadn’t realised just what a man- mountain he was. He looked about six two, six three and at least 13 or 14 stone. But he could move that frame around, go both ways and play with either foot. I didn’t have any tools to stop him, really.

I’ve been on the same pitch as better players, like Ronaldo in the FA Cup final. But thankfully he was on the other side of the pitch. Ginola was my direct opponent and he’s the biggest test I’ve ever faced.

But if I had to pick one it would be Upton Park, specifically as a Millwall player. That fixture has to be seen to be believed.

Raucous, hostile, deafening – just an amazing occasion. I loved it and it got the adrenaline going like nowhere else. Even the walk from the station up to the Boleyn Ground was an experience.

I’m doing a lot of media work for talkSPORT and BBC London. I want to make a successful career of that. Long-term, I hope to live a long and fulfilled life. Football-wise, I just want to be remembered as someone who, however limited in ability, always gave their all.

Listen to Matt and Ian Danter’s (talkSPORT) podcast called Football Men on iTunes, or Audioboom. Also read Matt’s bi-weekly column in First Touch newspaper if you are in any NYC football bars, or download the free App ‘First Touch: Soccer and the City’.