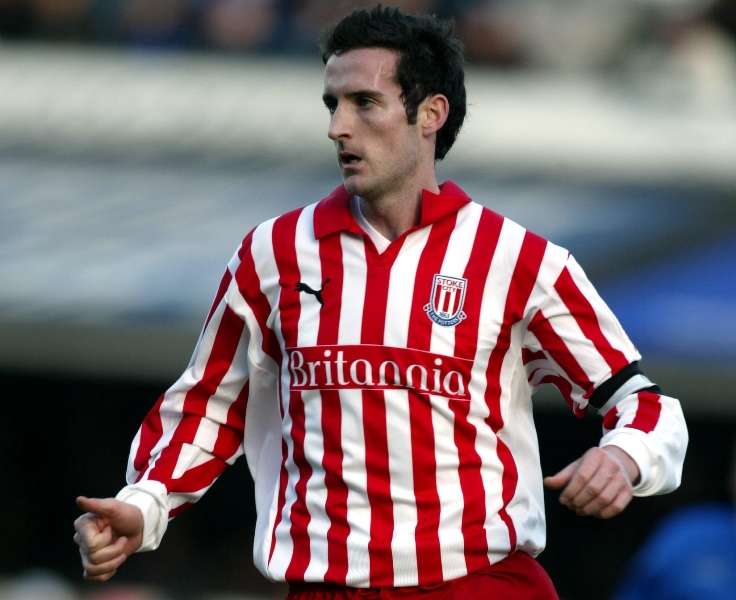 THE first thing Clive Clarke remembers about the last day of his career is waking up in an ambulance. Unbeknown to him, the Leicester full-back had suffered a cardiac arrest during a match against Nottingham Forest, stopping his heart for four minutes.

And though he would live to tell the tale, that terrifying brush with death in 2007 spelled the end of the former Stoke, Sunderland and West Ham man’s playing days, aged just 27.

These days, Clarke gets his football fix as an agent and is gearing up for a busy January. But the 35-year-old still found time to tell The FLP about his years on the grass, from working under Tony Pulis to being tortured by Thierry Henry – and, of course, that fateful night at the City Ground.

I was at Stoke from the age of 14 to 25, so a long time. I played at a tournament in Stoke when I was 14 and they offered to sign me there and then. I’d played for the Irish Under-15s and I had offers from a lot of clubs but I liked the people at Stoke and it just felt right.

I came over once a month from my home in Dublin, then moved over permanently on my 16th birthday.

To go from the Irish countryside to a big city in England was a culture shock for sure, but I’ve been here ever since so it can’t have been that bad!

That’s a difficult one. I had a really strong relationship with Tony Pulis. I was his captain at Stoke and we were together for three years.

I liked his style. He was a winner. He was a tough guy but once you knew what he was about, he was great to work for. As a defence, he worked you hard and you were very well drilled. But once you got on the ball, he let you speak with your own voice – as long as you didn’t mess about!

Alan Pardew was an excellent coach. I was only at West Ham with him for a year but he was very pioneering and you could see he’d go on to have a great career.

I’d say a mix of Alan’s technical coaching and Tony’s organisation and man-management would be the perfect blend.

I saw some great players with the Republic of Ireland – Robbie Keane, Roy Keane – then Teddy Sheringham at West Ham.

But the most memorable was a Dutch guy at Stoke called Peter Hoekstra. He was a phenomenal winger who’d played for Ajax and Holland before a terrible ankle injury ended his days at the highest level.

He came to us afterwards but, ability-wise, he still had everything. Speed, technique, awareness – when he was good, he was unplayable. I always remember playing against Reading when Pards was manager. Peter scored a hat-trick that day and absolutely tore them to pieces.

A lot of those lads ended up in the Premier League a few years later and I bet none of them suffered a roasting as bad as that. It’s easily the best individual display I’ve ever seen in the flesh.

From League One – or Division Two as it was then – with Stoke in 2001-02. We beat Brentford 2-0 in the Play-Off Final at the Millennium Stadium in Cardiff.

If you win, it’s definitely the best way to go up. Nothing beats the feeling when that whistle goes – and we had a great weekend afterwards.

I played with a lad called Jimmy Walker at West Ham and he’s one of those people who, even now, always puts a smile on my face.

He was a goalkeeper, and they’re crazy at the best of times. He was no different. I played with some right cracker lads who’d do daft things and wind everyone up but nobody was as quick-witted and consistently able to make me laugh as Jimmy.

When I was at Stoke, we got a lad called Chris Barker on loan from Cardiff. He was always decked out in dodgy gear and took a load of stick for it.

The weirdest thing of all was that he always wore flip flops. Summer, winter, rain, snow – it didn’t matter.

Anyway, this one day, we waited until he’d gone in the shower and then some of the lads superglued his flip-flops to the floor.

He came trotting out and tried to slip them on in a bit of a rush. We thought they’d just peel off the deck but they stuck fast and he ended up landing flat on his face. It must have been good glue because he was a big lad!

Playing for Ireland at every level, right through from Under-15s to getting two full caps. That’s what you dream of as a kid.

I’ll never forget my debut. It was in the summer of 2004, in a friendly against Nigeria. I played left-back against Obafemi Martins, the striker who was at Inter Milan and Newcastle. He was a handful, lightning quick. But I coped really well and it was a great day.

Back then, Ireland had so much talent in the full-back area. You had Steve Finnan, Stephen Carr and Gary Kelly all fighting for the right-back position. Jeff Kenna could drop in. On the left, I had Ian Harte and Steve Staunton in front of me. I was in a lot of squads but hardly ever got on the pitch. 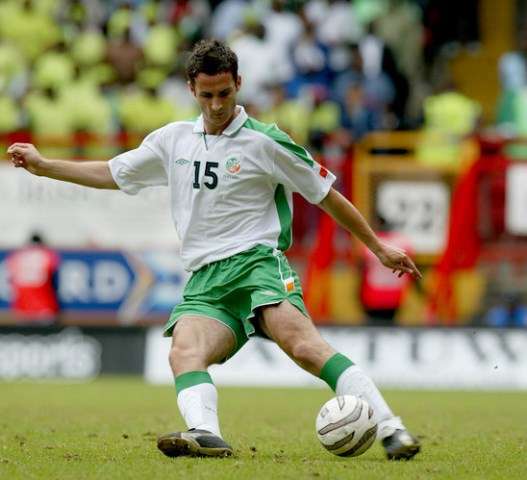 Biggest achievement: Clarke in action for the boys in green (Photo by Action Images)

Having to retire at the age of 27 after suffering a cardiac arrest. I was playing for Leicester against Nottingham Forest in the big East Midlands derby.

During the game I’d felt a bit leggy and, coming off the pitch at half-time, I did feel completely exhausted.

I was sat down and someone was talking to me but it wasn’t really registering. Next thing I knew, I was in the back of an ambulance, dressed in my full kit with my shirt ripped down the middle.

You look and you think ‘What’s happening here?’ It’s hard to put into words how you feel because it’s just so surreal.

The next day I was a bit sore. They’d cracked a few ribs trying to resuscitate me and when I collapsed I banged my head. But apart from that, I was fine.

They put me on a treadmill to do a run and take readings. They said ‘You’re the fittest person we’ve ever seen – there doesn’t seem to be anything wrong’.

They never did get to the bottom of what happened. It’s still unknown today. That’s why the specialists said I shouldn’t ever play again.

It’s very weird. On the one hand, you’re delighted to be alive. My heart stopped for four minutes – I should have been dead. But for a doctor to then say you can’t ever play again is a bitter blow to take.

About a year after, I was back playing five-a-side and doing my coaching badges. A few of the Droylsden lads said ‘Come along, you’ll get a game’. I ended up having a relapse and was in hospital for four or five days.

I’d not long been married and had a nine-month old daughter so it was a no-brainer after that. I haven’t kicked a ball since.

I actually played for some tough fans. The supporters at Stoke and West Ham can turn very nasty if you aren’t doing the business.

But in terms of an away ground I’d have to say Millwall. It was only one year but the atmosphere was really tasty and that started spilling onto the pitch. 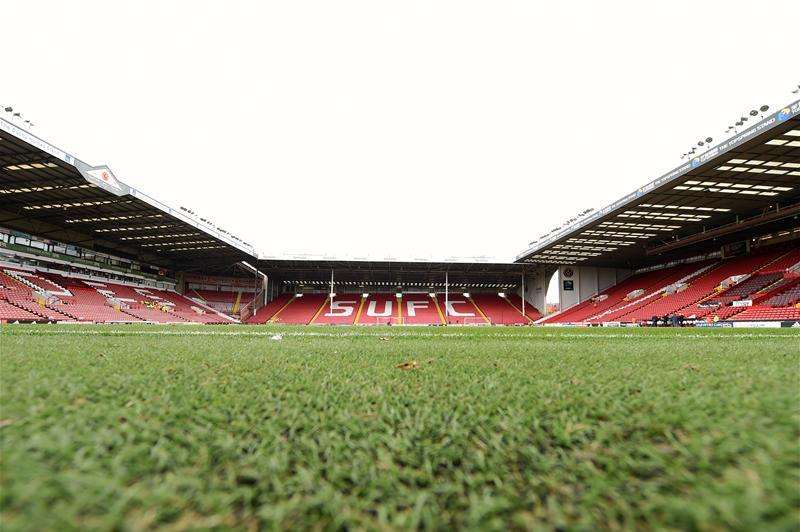 It wasn’t exactly scary but, going off at half-time, you were thinking to yourself ‘If we win, this place could kick off’. It’s the only time I’ve ever sensed that.

I’ve had a few of them! When someone’s on form, full-backs can be pretty exposed. But I have to say that the best player I ever came up against was Thierry Henry. He gave me an absolute roasting at West Ham.

He’s not the nicest guy in the world but he was a very talented player. He’s 6ft 2ins, lightning quick, very strong and very tricky.

I always enjoyed playing at the old stadiums. And my favourite was Bramall Lane in the Neil Warnock days. I always seemed to have a good game. Highbury was great. And I always loved playing in London, especially at Palace. They don’t get the biggest crowds but when the team’s going well they create a hell of an atmosphere.

I was lucky to play at a decent level and I’ll never be able to replace that. But being an agent now keeps me involved in the game. Anyone can do the deals but I think having that experience as a player, I can help young lads through the pitfalls, the ups and downs.