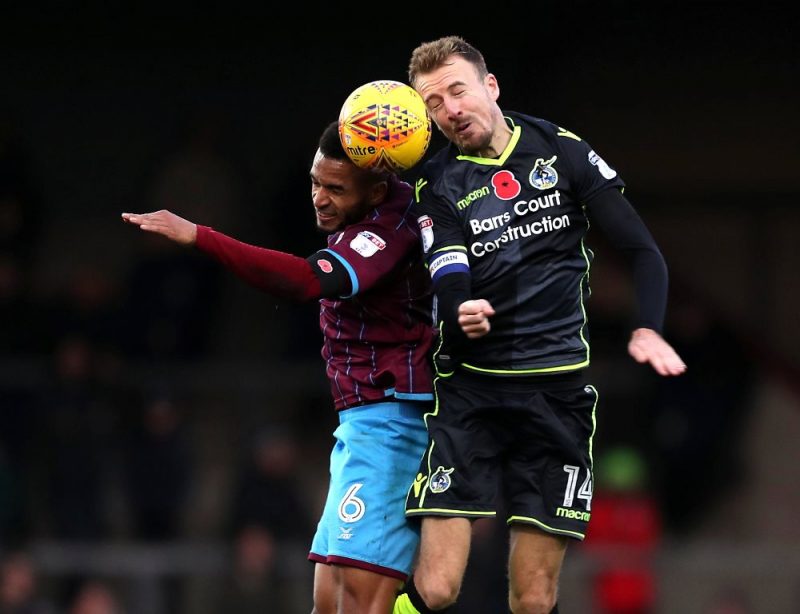 Ollie Clarke. He’s my midfield partner most of the time and he was up-and-coming in the youth team in my first spell at the club (2002-2011), so I knew of him around then. When I came back to the club, he was a first-team player and my roommate. We’ve been away together a few times as well.

Ellis Harrison brings a little game on his phone where you stick your finger on the screen and whoever the red arrow lands on has to pay.

I’m not sure whether he’s using that as his little excuse or not. Maybe he’s rigged his phone – it always seems to land on me. There are quite a lot of stingy blokes at the club, actually.

Tom Lockyer lost a vote on this recently. He had this silver necklace for which he got stick, though the rest of his gear wasn’t that bad.

We went away to Portugal pre-season and one night we had to vote for the worst-dressed on our night out. It was pretty savage on some of the lads.

I look after the music. I try to mix it up to please everyone. We’ve got quite a young squad.

I’m not the typical over-30. I like hip-hop and rap. I’ve got a dressing room playlist, so we just add to that. There don’t seem to be any complaints.

Byron Moore would be late for his own funeral! He’s not always late, but he likes to leave it to the last possible minute. The fines are quite hefty for being late and he’s had a few.

Stuart Sinclair, because he’s worked with the gaffer for most of his career. He’s always the one he can trust. Ellis Harrison gets away with murder as well. The gaffer let him off a fine the other day.

Not many, to be fair. We haven’t had a social night for a while. I think we’ve got a squad of toe-tappers.

Most likely to disgrace himself at the Christmas party?

Again, we’ve never really had any stand-out ones. You get a couple of the younger lads who don’t go out much and go overboard.

But I’m one of the older ones and, as well as letting my hair down, I’ve got to make sure the lads behave themselves.

Our physio, Keith Graham, has a Chinese symbol. It’s a semi-permanent tattoo that he’s had for 20 years. Something off the Chinese takeaway menu, perhaps.

Likely to make the best manager?

I would put myself forward, but I don’t know if that’s the path I want to take. Tony Craig has just come in. He’s looking to go into coaching and he’s got manager written all over him. Tony has a lot of experience. He’s vocal. That’s what he’s looking to do.